Davie Provan made a welcome return from a six-week injury absence for Celtic’s next match, a visit to Cappielow, Nicholas dropping to the bench. Charlie would come on in the second half to quickly set up the opener for George McCluskey, with Celts holding that slender lead as the game drew to a close. There was a dramatic finish, however, Bonner bringing down McNeil in the box to allow ex-Celt Andy Ritchie, a real thorn in our side throughout that period, to equalise with a last-minute penalty.

There was another point dropped the following Saturday, this time at home to Rangers, following an incredible opening spell. David Moyes continued at right-back in place of injured skipper McGrain, the youngster having a hand in all three Celtic goals, first setting up McAdam for a third-minute opener, then delivering a teasing cross for McGarvey to score with the most delightful looping header before heading down for MacLeod to complete the scoring at 3-3 with a vicious drive early in the second half. Rangers had equalised in the fifth minute through Dalziel, then took the lead with two quick goals from Bett and John MacDonald with the clock scarcely reaching the twenty-minute mark.

The short trip to Firhill provided the next test, Celtic passing with ease thanks to a fantastic McCluskey opener from fully 25 yards and a somewhat fortunate second from Provan after the interval. At the other end, Bonner earned his crust, keeping out a volley from Jags’ teenage striker Maurice Johnston. Then back home on the first Saturday of December, Dundee were comfortably put to the sword 3-1, thanks to a second-half McGarvey double, either side of a Mike Conroy strike, his last goal for the club. And to complete a successful day, Ritchie was at his mercurial best as Morton shocked Aberdeen 2-1. 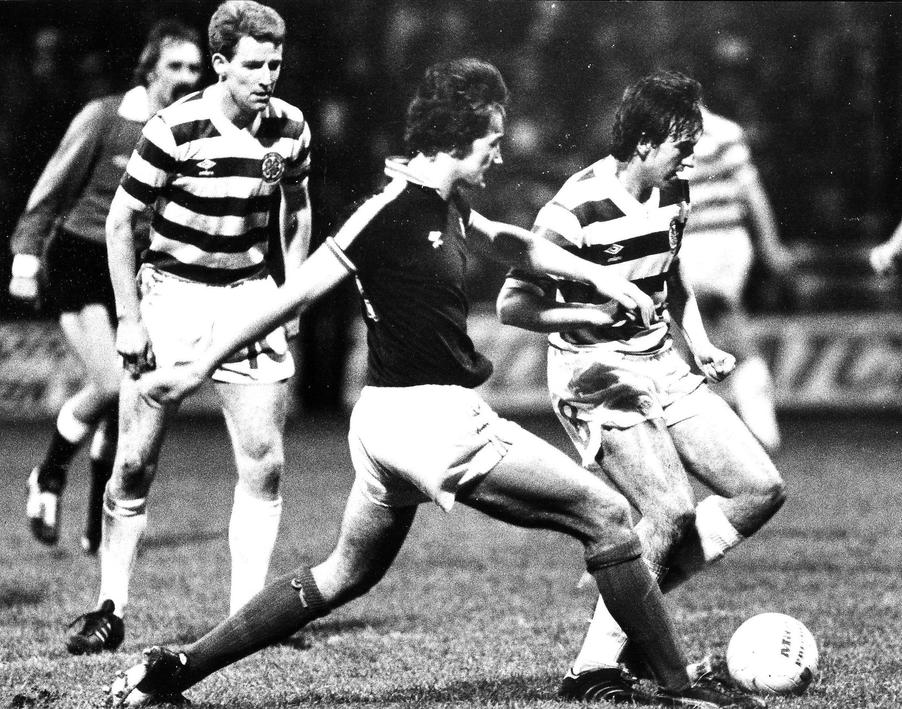 This would prove to be the last League action of 1981, as extreme weather descended on Scotland. Having led from the opening day, Celtic remained in pole position, an impressive seven points clear of Dundee United, St Mirren and Aberdeen. With a game in hand, League Cup finalists United would be considered the prime threat from that posse. However, despite their defeat at Cappielow, most of us were convinced that the strongest challenge would again come from Ferguson’s Dons in the new year.

Table-topping Celtic ‘enjoyed’ an unplanned winter break following the victory over Dundee in early December, as the freezing spell continued through January. There was only a match at Ibrox to break the monotony, their undersoil heating allowing an instantly forgettable game to go ahead. The tone was set from kick-off, literally, McCluskey’s backwards pass to Nicholas penalised by referee McGinlay. Bett’s late penalty was decisive, following a foul by Bonner on Cooper and there was only one positive for Celtic, albeit a huge one, the return of skipper Danny McGrain after an injury-plagued few months.