It was Scottish Cup time again the next weekend, Celts getting the toughest possible draw, a return to Pittodrie, a fortnight after the excellent League victory at the same ground. Free from the constraints of boycott, we travelled north far more optimistic than was normally the case for such trips, on the back of three successive wins against Aberdeen.

But this would be the Dons’ day, a strangely subdued Hoops side offering little and falling to a Hewitt first-half goal, the youngster flicking the ball home following a corner. Hewitt was a fine striker and had a horrible habit of doing well against us, probably the main reason Billy brought him to Celtic in 1989. Sadly, he would never come close to replicating his Aberdeen form at Parkhead in his two-plus years at the club, failing to score a single goal in a paltry 21 appearances, as he fought against persistent injury problems. He was given a free in January 1992.

If there was any consolation in being knocked out of ‘our Cup’, perhaps it was the knowledge that full focus would now be on retaining our title. This was hardly in evidence in Celtic’s next two fixtures, a home draw with Partick Thistle, Celts needing two late goals from McCluskey and Aitken to salvage a point as incredibly boos rang out around the ground, then another single-goal defeat at Easter Road, cigar-toting ‘10.30’s Hibs making it five points out of a possible six against the defending champions.

March was much-improved, albeit with a low-key start, as a miserable 9,000 crowd turned up on an equally-miserable Wednesday night to watch Celtic beat Morton 1-0 with a late goal, McGarvey finally netting after watching both his penalty effort and rebound saved by ex-Celt Roy Baines. Earlier, George McCluskey had blazed a spot kick over the bar, with both awards courtesy of fouls by the returning Jim Duffy, doing his best to undermine my kind words above! 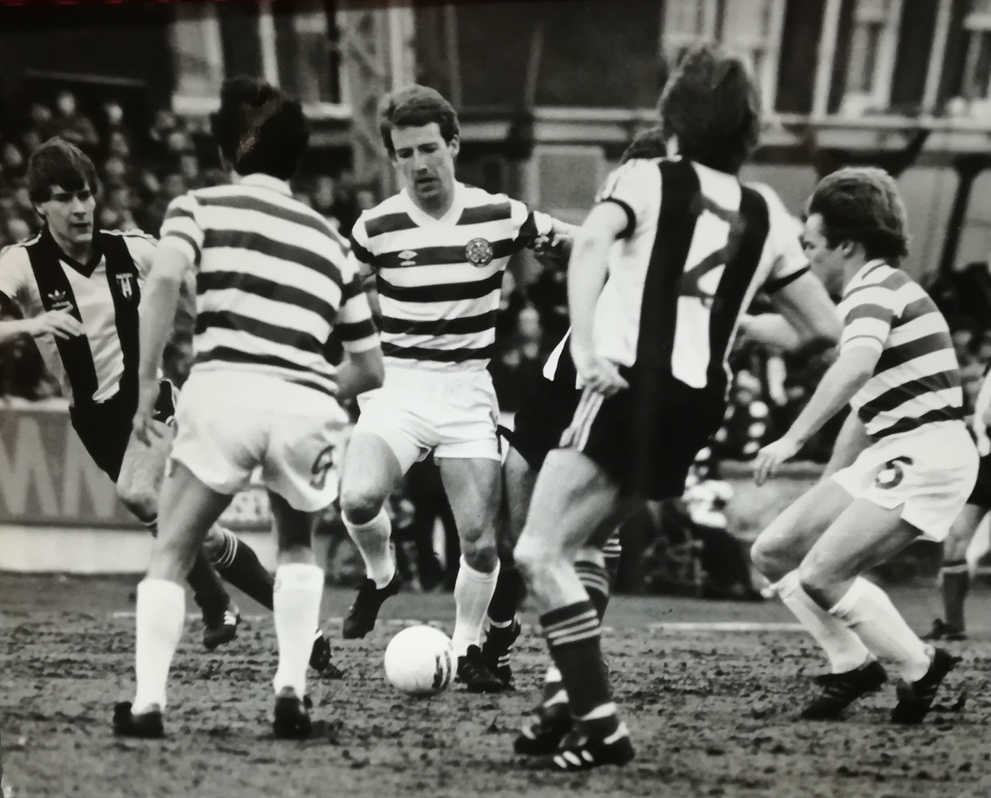 Two weeks later, Celtic looked in the mood at Love Street, striking four times without reply in a superb first-half performance to finish the contest by the interval, MacLeod, Burns, Sullivan and McCluskey all on target as they tore the Saints apart. The continued absence of Provan allowed Danny Crainie a first-team bow wide on the right and he did not disappoint, with the first of many good displays in the title run-in. Murdo added a fifth, sandwiched between a McDougall double, as Celts declared at 5-2. 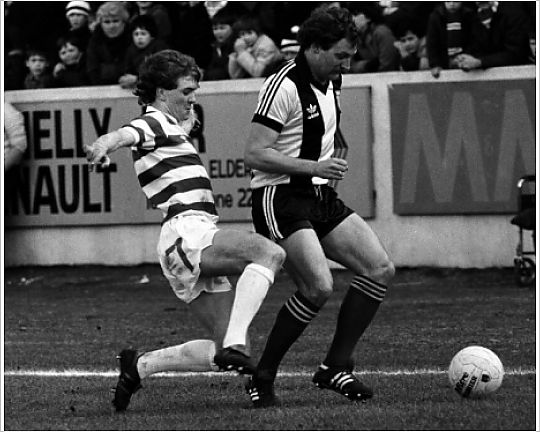 It was less convincing at Celtic Park the following Saturday, Sullivan and Burns again amongst the goals as Airdrie were defeated 2-0, in a lacklustre display. Nevertheless, a true mark of champions is winning games whilst not enjoying the best of form, with another two points banked as we closed in on a second successive title, something not achieved since Jock’s side managed THE nine-in-a-row in 1974.

There was a rare big crowd at Parkhead for the next match, 30,000 in the ground for the final match-up with Ferguson’s Aberdeen. It was win-or-bust for the Dons, who somewhat stole the points with a fluke second-half goal from full-back Stuart Kennedy, his cross deceiving Bonner and sailing into the far corner. It was a day for missed opportunities for Celtic, with, for once, McCluskey the chief sinner, his late penalty driven straight at Leighton and rebounding to safety, a second successive spot miss. 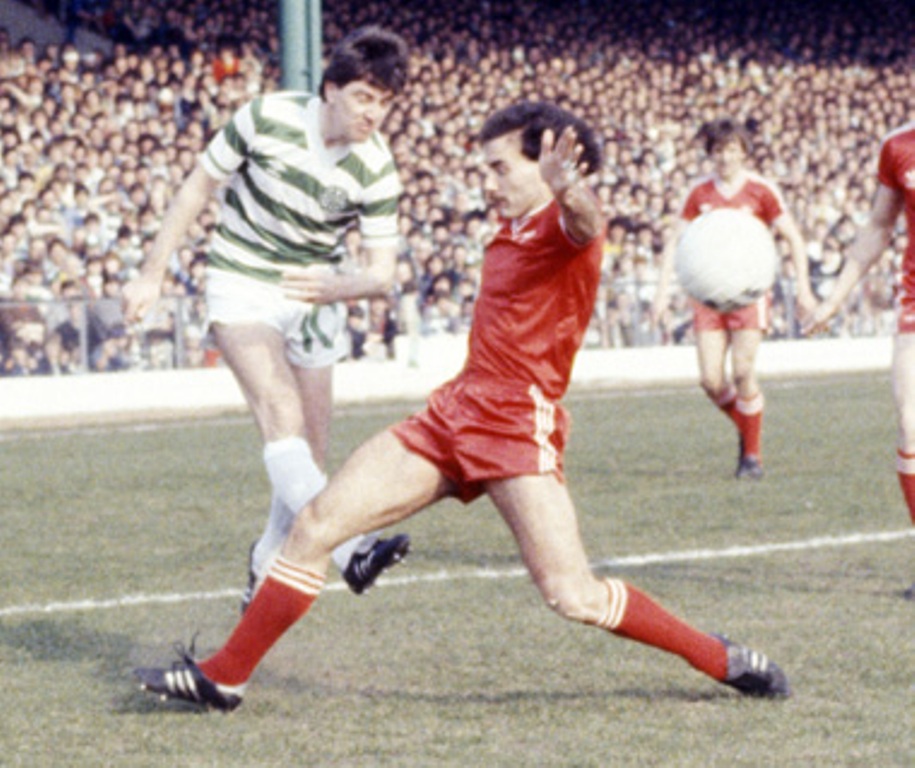 That result cut the deficit at the top of the table to just four points, so the pressure was really on as we headed to Tannadice in midweek for a re-arranged fixture. On the ground where the previous April Celtic had clinched the title, this was perhaps the most important game of the season.

And Billy’s Bhoys (careful there!) did not disappoint, Burns scoring within 90 seconds then clinching a crucial 2-0 victory with another excellent effort late on. Whilst Tommy rightly grabbed the headlines, both goalkeepers would play a key role in the game, Bonner outstanding for Celtic whilst McAlpine tackled McGarvey outside his box as he raced to clear, the Celt then stretchered off with a fractured tibula, the second Hoops striker to suffer a leg break in two months. A vital win but achieved at a huge cost. 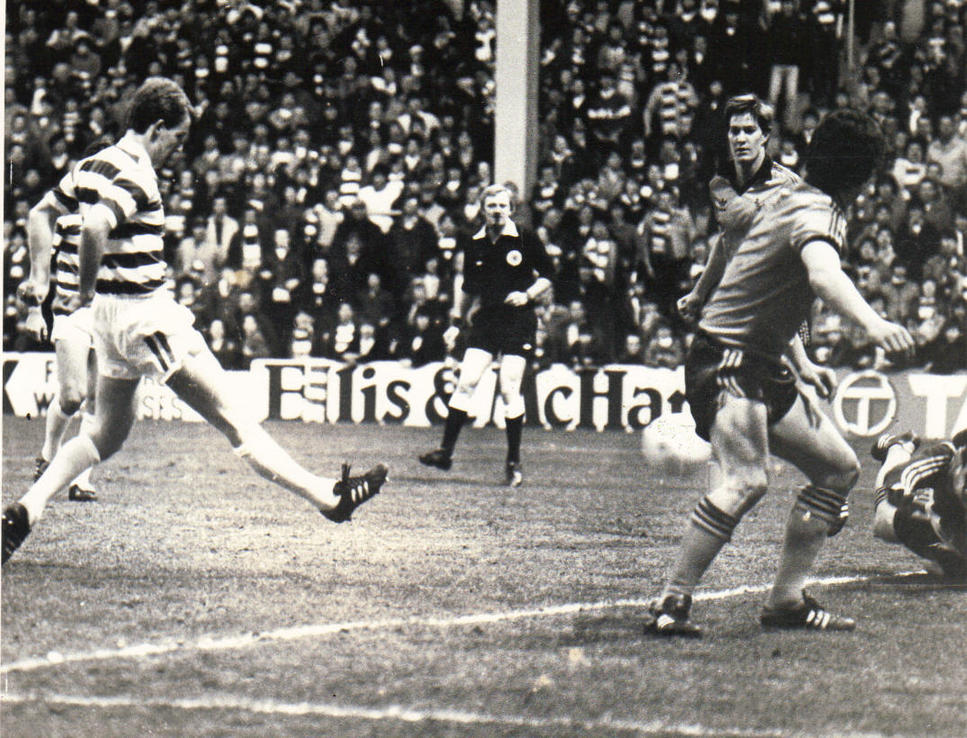