You are at:Home»Latest»Celtic awarded prestigious ‘Winged Victory of Samothrace’ statuette from France Football

A bullet from Harry as Celts run riot– An extract from Harry Hood: Twice as Good. The official biography by Matt Corr which is published next month and available to pre-order now via from Celtic Star Books…

The week to follow involved a Parkhead double-header with Dundee. Having opened his European account against Kokkola, Harry finally got off the mark domestically, and in some style, on Wednesday, 23 September 1970, his bullet header three minutes from the break giving Celts a three-goal cushion in the second leg of their quarter-final tie, before 41,000 spectators. The goal is beautifully described by Malcolm Munro of The Evening Times.

“The third goal, scored by Harry Hood, was a masterpiece. I saw it coming all the way. Danny McGrain ran forward with the ball, tailed by the wee man, Jimmy Johnstone. As the back went forward, you could hear Johnstone yelling for a pass. McGrain side-flicked the ball to Johnstone, who made ground, then gave the ball back to the right-back.

Danny immediately controlled the ball and clipped a wonderful cross to the far post, where Harry Hood rose like a bird and met the ball squarely with his forehead to score. It is goals like this which demoralise the opposition. There was no question of a foul or offside, or of any infringement. It was a goal, and a bonny one at that. A goal that was inevitable on the run of play.”

Lou Macari had opened the scoring early on and – just as he had done at Shawfield at the beginning of the month – and he would also round off a great night’s work with Celtic’s fifth goal in the closing stages. John Hughes was also on target in the first half, before being replaced by Paul Wilson, who duly scored for the second successive midweek. Gordon Wallace managed a solitary reply for the visitors as a 5-1 win on the night saw Jock Stein’s men through to the last-four draw on a 7-3 aggregate. 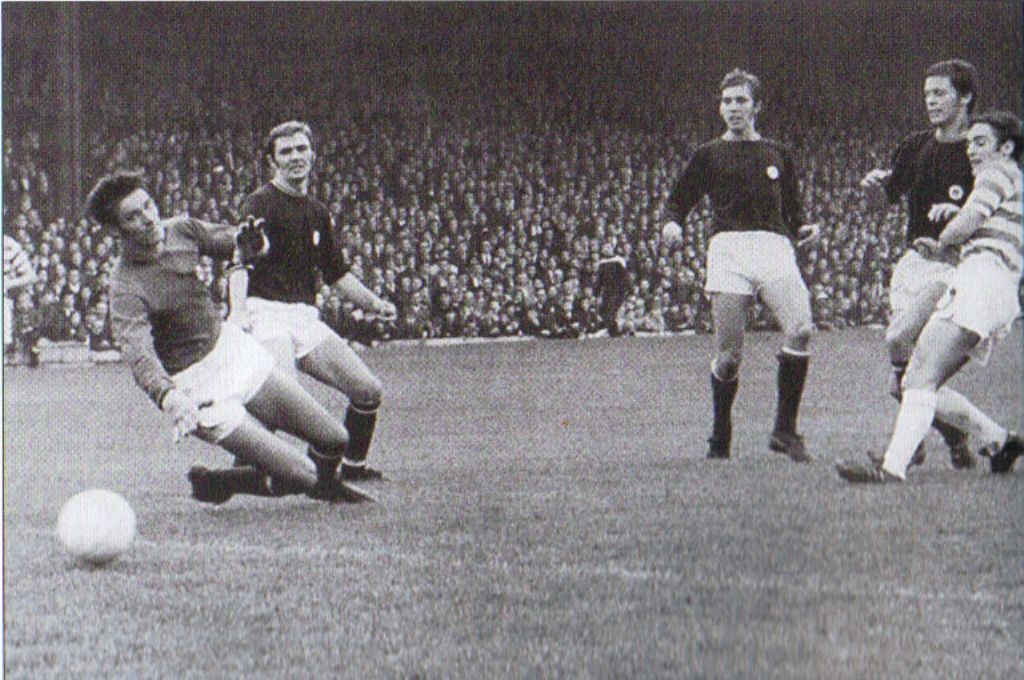 The somewhat lop-sided format adopted by the League Cup at that time – where all the First Division sides were grouped together, meaning most would not survive the section stage – produced the usual surprise semi-finalists, newly-promoted Cowdenbeath and Second Division Dumbarton joining Celtic and Rangers in ‘the hat’ two days later. 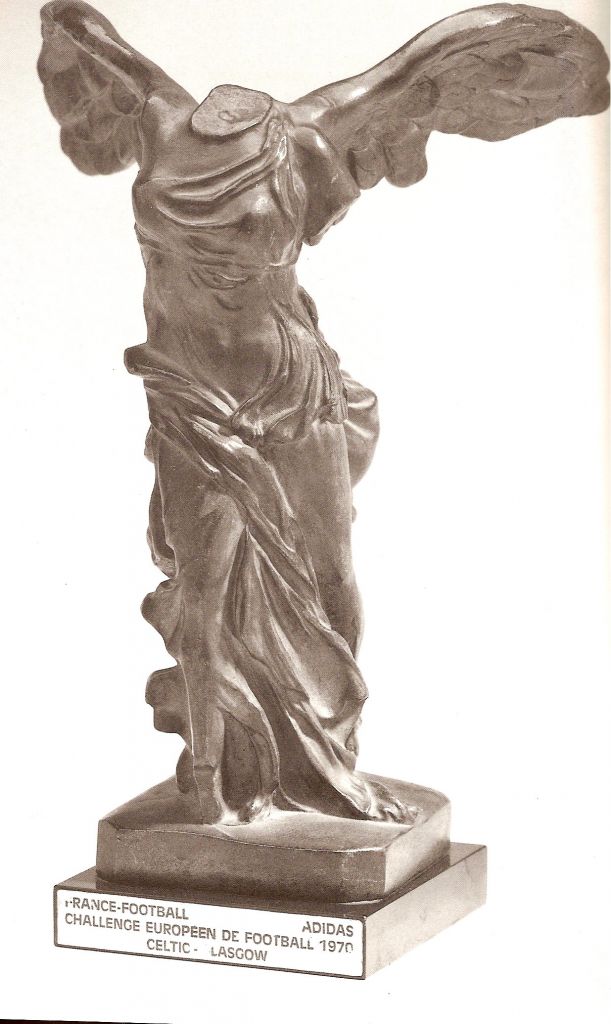 There were few gasps of astonishment, I suspect, when the Glasgow giants were kept apart, Charlie Gallagher and his Sons of the Rock drawn to face the Hoops at Hampden, just a few months after leaving his beloved Celtic Park. His old boss was out of the country at that point, Jock Stein and club secretary Desmond White in Paris to pick up the prestigious award from France Football and adidas as Europe’s Team of the Year for 1969/70, having been runner’s up in each of the previous two seasons.

The beautiful ‘Winged Victory of Samothrace’ statuette is a much-loved display item in the Celtic Park boardroom to this day.

One of my favourite images of Harry.

He rises majestically to bullet a header past Dundee keeper Ally Donaldson and put Celtic 2-0 up in the second leg of the League Cup quarter final.

Harry Hood: Twice as Good. The official biography by Matt Corr will be published by Celtic Star Books next month. You can now be pre-order copy which will be signed by the author, by clicking on the image below…

Previous ArticleAnge on McCarthy: “Fair or unfair, James is a big boy and I’m sure he’s had plenty of criticism in his career”
Next Article “The supporters came out in their numbers,” David Turnbull on Livingston Defeat