You are at:Home»Latest»Celtic confirm 18.5k for West Ham and 24.5k for next Euro qualifier

Celtic have confirmed that there will be 18,500 supporters in attendance at Paradise on Saturday. West Ham United will visit Glasgow’s East End as Ange Postecoglou prepares his side for Wednesday’s trip to Denmark to face Midtjylland in the second leg and there will be double the amount in the ground as there were last night for the first leg.

In a statement, the club confirmed that the Safety Advisory Group have permitted the club to welcome back increased numbers ahead of the next two games.

Following today’s meeting with the local Safety Advisory Group, we have been informed that around 18,500 supporters will be permitted access to Saturday’s friendly against West Ham United at Celtic Park (July 24).

“We are also encouraged by the indicative figure of around 24,500 for the subsequent home game in Paradise from the Safety Advisory Group.

“We were delighted to have our supporters with us last night for the game against FC Midtjylland, and we really look forward to welcoming our fans once again for the match this Saturday.

“We can assure our supporters we will be doing all we can to work closely with the relevant authorities and welcome our fans back in even greater numbers in the coming weeks.

“Details on match ticket balloting for West Ham United will be shared in the next 24 hours, but in the meantime we ask that you continue to familiarise yourself with our new protocols for reduced capacity matches at Celtic Park – full details of which can be found on the Celtic website here.

“We want nothing more than to welcome as many fans back to the stadium as quickly as possible, and therefore appreciate your patience as we continue to work behind the scenes to make that happen.” 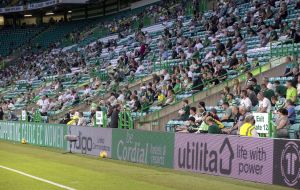 The club also confirmed that there will be 24,500 for the next European Qualifier – with opponents depending on the result on Wednesday. Let’s hope that it is either PSV or Galatasaray in the Champions League and not the Europa League Qualifiers.

Hopefully, by August 9th we will be able to welcome capacity crowds back to Paradise. This date remains indicative and may be subject to change but the numbers are encouraging .

Previous ArticleVideo: Celtic’s Unique Angle as Liel Abada scores on debut
Next Article “Charlie Gallagher? What a Player!” – “Rumours going round Glasgow that Celtic were finished”