You are at:Home»Latest»Celtic face inevitable Odsonne Edouard test of resolve

Despite what has been a hugely frustrating season for Celtic, underlined by the inevitable resignation of Neil Lennon in February, it seems that every cloud has a silver lining. In the midst of what the fans believe has been a mediocre campaign, while the team as a whole has failed to meet expectations, at least Odsonne Edouard has managed to maintain a reasonable level of consistency.

As the 2020-21 campaign drew to a close, Edouard has netted more than 20 goals in all competitions for Celtic, which makes him comfortably the club’s top scorer for the third season in a row. Topping the Scottish Premiership scoring charts for a second consecutive season, the Frenchman has become a guarantee of goals at both club and at International level for the French Under 21s. 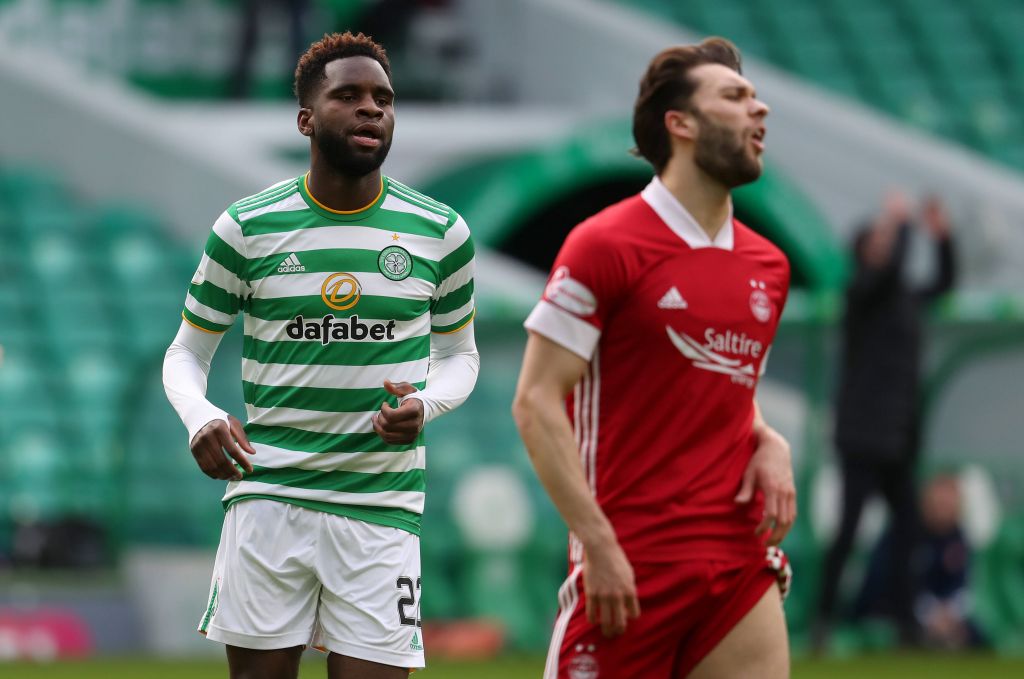 That kind of quality inside the box obviously attracts plenty of attention. Last summer there were reports that Bundesliga clubs Borussia Dortmund and RB Leipzig were preparing to swoop, although nothing eventually came of that speculation. This time, stories are emerging that several English Premier League clubs have been scouting the 23-year-old, valuing the player at around £25 million.

According to The Sun, interested teams include FA Cup Winners Leicester City, Aston Villa and Crystal Palace, although they believe Arsenal could be the most likely destination, with the Gunners actively shopping around for attacking alternatives. If such interest becomes a formal bid, the resolve of Celtic will undoubtedly be put to the test. Much could also depend on who The Bhoys eventually appoint as manager.

Edouard is the kind of player that a manager can build the team around, priceless in many respects due to the exciting and explosive nature of his attacking ability. Such quality in the final third is hard to find, yet the club also has to consider the bigger picture. The player has already expressed a desire to move on in the past, which means resisting interest from elsewhere is getting tougher all the time for Celtic.

Transfermarkt data states that Edouard’s contract will expire in May 2022, which means that if no deal can be agreed to extend his terms with Celtic, the club would logically seek to cash in on their prize asset while his market value remains high. Following a period when finances have been stretched more than ever, Celtic simply cannot afford to risk losing the player for nothing.

An influx of cash from selling Edouard can go towards bringing in several quality additions, making Celtic a fairly safe bet prediction for silverware next season. They will inevitably start behind theRangers in the Scottish Premiership betting stakes, yet odds will undoubtedly shorten with positive recruitment during the summer.

Regardless of which managerial candidate takes the Celtic job and it’s almost certainly going to be Eddie Howe, a complete review of the squad is required, followed by an inevitable rebuild. Since the start of football amid the Covid restrictions, Steven Gerrard’s theRangers side have leapfrogged Celtic, establishing a competitive edge that the new Celtic manager will have to match. Doing that will require serious investment and careful planning.

This could be the most crucial transfer window for some time at Celtic, which means that fans will be praying the club hierarchy can make all the right decisions. Something they have failed to do in recent times. Indeed, the coming months will be decisive towards laying solid foundations, from which to build a team capable of meeting fan expectations.