You are at:Home»Latest»Celtic fans can be hopeful after Ibrox news, capacity for West Ham game due tomorrow

Celtic fans can be hopeful of a return to Paradise in greater numbers after Rangers detailed their intention to have increasingly large crowds at Ibrox in the coming weeks. Celtic face West Ham in a pre-season friendly at the weekend with fans hoping to get back to Paradise.

It was confirmed that Ibrox will host 8,500 on Saturday versus Brighton and then 12,750 the following day against Real Madrid. There will also be 17k at the ground in Govan for their league opener versus Livingston on July 31st. These numbers should give the Celtic support excitement about getting back to games in significant numbers. 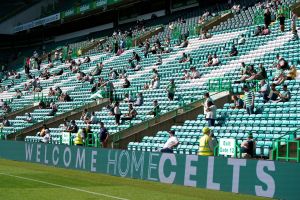 Celtic’s SLO John Paul Taylor has confirmed that Celtic will be looking to increase their capacity for the game against David Moyes’ side on Saturday. Ange Postecoglou’s side played in front of 2k in the game against Preston North End at the weekend and 9k will be through the turnstiles tonight. However, JP Taylor has said that the club will find out tomorrow as to whether they will be allowed an increase tomorrow.

Not had anything confirmed from the City Council as yet Brian, I believe we’ll find out tomorrow

Yes, hoping for an increased capacity for Saturday

Ultimately, the Rangers news tells us that each game offers an incremental increase in terms of attendance. This means that Celtic should be expecting increases ahead of a return to full stadiums after August 9th.

Previous ArticleCeltic v Midtjylland- team news, kick off time and where to watch
Next Article OPINION: Celtic boss claims ‘it is up to Leigh Griffiths to save his Celtic career’ – but haven’t we heard this all too often?