Celtic returned to SWPL1 action this Sunday lunchtime with a huge game against unbeaten and top of the table Hibernian at Penny Cars stadium in Airdrie and delivered the late, late show as a 91stminute Charlie Wellings goal delivered another Champagne moment from Celtic’s new striker, after a frustrating game against the league leaders.

Once again Fran Alonso had us all guessing with his chosen line up. Rachel Johnstone came into the side to replace Chloe Logan in the week the young Celtic ‘keeper earned a deserved first professional contract with the club. 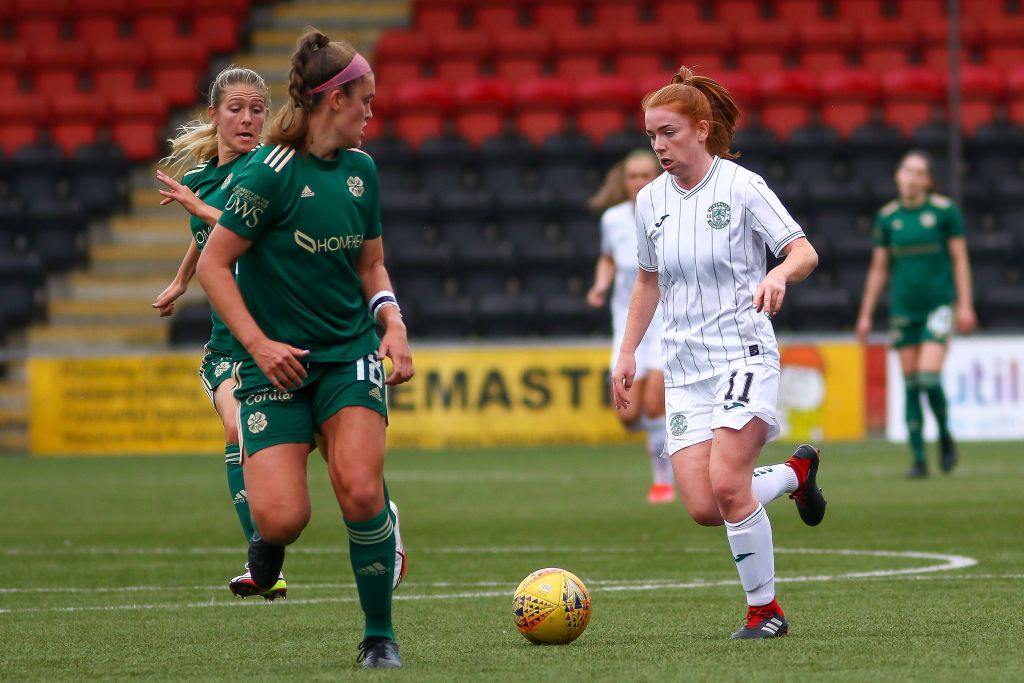 There was also plenty of attacking intent as Charlie Wellings, Clarisa Larisey and Maria Gros brought a mixture of superb movement, plenty of pace and an eye for goal to Celtic’s front line, meanwhile Olivia Chance and Mengyu Shen gained well deserved starting positions in the Celtic midfield after their respective impacts on Celtic’s back from the dead second half performance against Glasgow City last time out.

And it was in the early exchanges both Chance and Shen who stood out with the latter in particular constantly looking to find the gaps to feed Wellings, and after only a minute Celtic could have been one up as Shen picked out Tegan Bowie on the left side who in turned delivered a fine cross that Wellings perhaps still finding her feet in the game could only glance wide of the post. 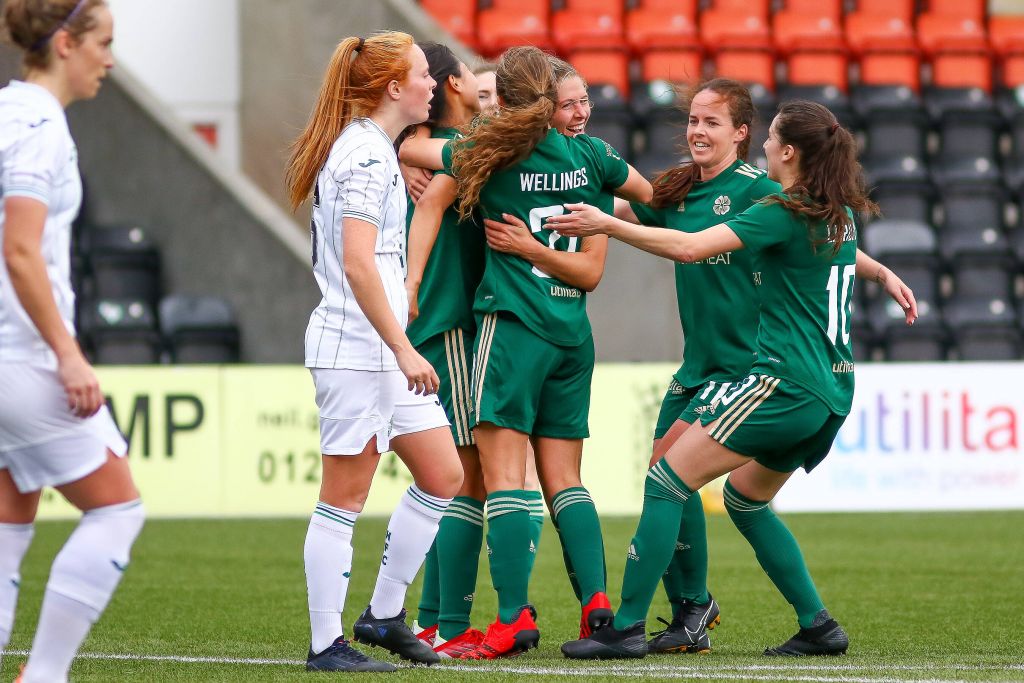 . GOAL 1-0 Sarah Harkes 14 of Celtic Women FC with a strike from outside the box. Photo Colin Poultney PSI

Meanwhile at the back Celtic’s defensive three of Hayes, Clark and Bartle playing today as a left-side central defender looked comfortable whenever Hibs looked to counter, ‘keeper Johnstone looked comfortable passing the ball from the back and Sarah Hayes added excellent composure and a perfect outlet when the defence looked to offload the ball.

As such Celtic settled into an early rhythm and controlled the game expertly without testing Hibs bar that opening Wellings opportunity with perhaps only the pedestrian tempo the negative that appeared to cause the angst of Fran Alonso patrolling his technical area.

But the tempo didn’t pick up and Hibs gained confidence from Celtic looking cautious to gain a foothold in the game and Celtic’s midfield started to look somewhat hot and bothered under more pressure. Yet despite this Hibs couldn’t turn possession into goal attempts and bar a Bowie effort that went high over the bar and an unorthodox save from Hibs ‘keeper English Celtic were it appeared running out of ideas too. 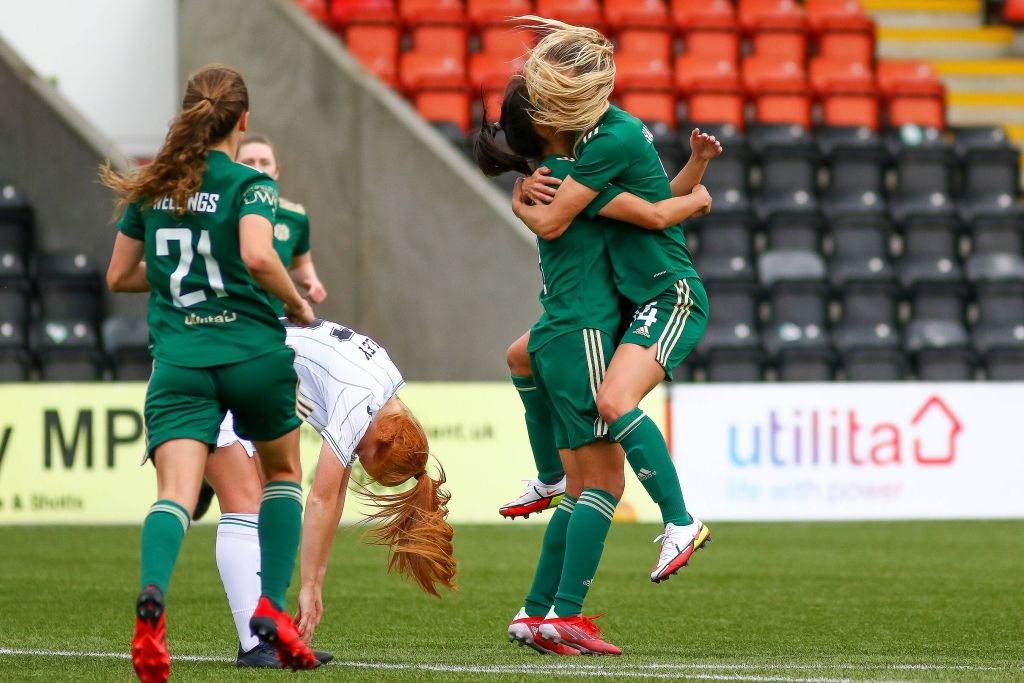 And as the half closed out without a goal or many meaningful opportunities Fran Alonso was going to supply some half-time inspiration if Celtic were to turn possession into points.

And the second half started brightly as a Larisey effort with the right instep rose superbly but unfortunately came back off the bar after excellent work from Bowie cutting the ball back and great awareness from Shen to allow the ball to run for Larisey to strike. Was this the arrival of much needed intensity and intent being added to Celtic’s play?

It certainly seemed that way as a weighted pass from Olivia Chance sent Larissey on her way and clear of the Hibs defence only for English to dive bravely at the feet of the Canadian striker to deny the Celts a goal. This was much better from Celtic.

As was a solo run and strike from over 20 yards by Charlie Wellings that whistled just past the post and a fine pass from Shen where Larisey just missed a headed connection that would surely have resulted in a goal.

But you felt the goal was coming and in 66 minutes it arrived, and what a fine strike it was. On one of the rare occasions Sarah Hayes managed to get forward to the edge of the area, the superbly talented American took a substitute Rachel Donaldson cross ball expertly on her chest and unleased a superb right footed half-volley from twenty yards that gave English no chance as the ball hit the net to the ‘keepers right side. Perhaps it was going to take something special to break the deadlock and that was exactly what Sarah Hayes delivered with that wonderful strike. 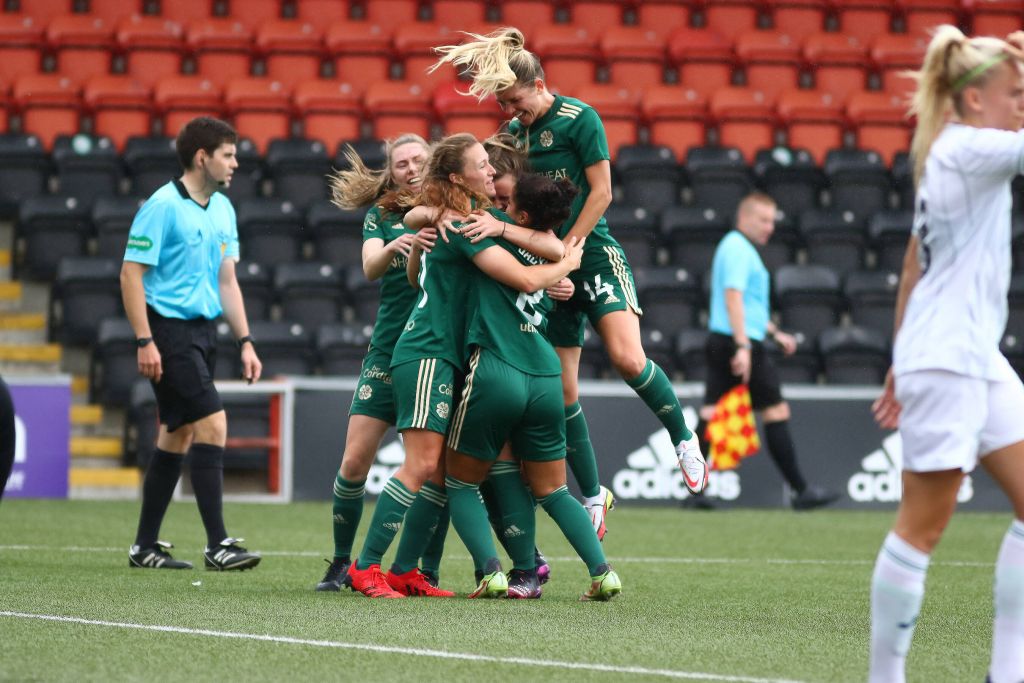 Celtic however after a spell of pressure shot themselves in the foot as Jodie Bartle’s attempted pass from the back was charged down and Hibs Colette Cavanagh unleashed a 30-yard looping shot that Johnstone in the Celtic goal couldn’t reach. It was a barely deserved goal for Hibs second half efforts but shows just how precarious a single goal advantage can be and it was a reward for Hibs impressive pressing of Celtic’s backline rather than a glaring defensive error from Jodie Bartle, who as a right footer playing as a left sided central defender has up to that moment performed admirably.

However, no-one will be happier than Bartle when Charlie Wellings found space at the back post in injury time to receive a McGovern delicate pass before thumping the ball superbly beyond English in the Hibs goal to make it 2-1 and ensure Celtic clinched the three points as well as delivering a first defeat of the season to a spirited Hibs side who not only lost the game but were also knocked off the top of the table.

Late, late show it may have been from Champagne Charlie Wellings but in truth Celtic deserved more than a point this afternoon and Wellings ensured justice was belatedly done.