You are at:Home»Latest»Celtic, Ferencvaros And The First European Cup Victory In 1914

Celtic face Ferencvaros in the Europa League group stages tomorrow. The match will be held at Celtic Park at the unusual time of 3.30pm, in what is sure to be the first of a testing double header. The Hungarians will be bringing a small away support, who quite shockingly have had to be asked to refrain from what the Ferencvaros club website described as “actions that can be interpreted by UEFA as Nazi flattery and anti-semitic actions.” Meanwhile, Celtic’s European away support are disappointed at not being able to travel to Budapest in two weeks time, a fantastic city where the Hoops once competed for a prestigious trophy back in 1914.

That historic connection with the Hungarian capital, once brought Celtic and Ferencvaros together, purely in footballing terms… and this is the story of how those events unfolded.

‘Good things come to those who wait’ is a phrase extolling the virtue of patience. Celtic certainly exemplified this proverb during The Budapest Cup shenanigans of 1914. It was during that year that Celtic had sealed a league and cup double, whilst Burnley had won the FA Cup in England. Both clubs happened to be touring Hungary prior to the beginning of the 1914/1915 season and as British teams were regarded the finest in the world at the time, Ferencvaros Football Club took advantage of these top side’s visiting their home city.

Ferencvaros decided to hold a charitable match between Celtic and Burnley at their FTC Stadion for the benefit of Balkan War refugees. A silver trophy in the shape of a lighthouse was donated by Hungary News newspaper, to be awarded to the winner of the clash, which had been alluringly named ‘The Budapest Cup’. Astonishingly, the hosts didn’t notify Celtic of the match in advance, but fortunately the club were able to shuffle their plans to fulfill the fixture when the late news came through.

The game took place amid scorching conditions. The pitch was dry and the crowd of close to 10,000 saw an aggressive encounter. Jimmy ‘Napoleon’ McMenemy put Celtic in front through a 20th minute penalty. Burnley then equalised with a penalty of their own in the second half, after ‘Sunny’ Jim Young handled in the box. The match finished that way, with the game tied at 1-1.

Reports in the press allude to the fact that Celtic refused to play extra time. The Hoops, weary in the mid-May sun, instead opted to travel to Burnley at a later date, where a replay could be held, and the Hungarians agreed to forward the trophy to the eventual victors.

On 14 September 1914), four months after the original game and almost seven weeks after the outbreak of World War I, Celtic finally travelled to Turf Moor. The Bhoys took the game to Burnley and dominated the first half without tangible reward. At the break, Peter Johnstone had to be withdrawn from the Celtic team with a foot injury and due to there being no substitutes in those days, the Hoops played on with ten men.

Nevertheless, Jimmy McColl netted a blinder just shy of the hour mark and the ever-reliable Patsy Gallacher doubled Celtic’s lead ten minutes later. As the game drew to its close, Burnley livened things up when they pegged a goal back from the penalty spot. It wasn’t enough for the Clarets though, as Celtic held out for a 2-1 win and the unofficial title of ‘World Club Champions.’

Speculation ranges in regard to the aftermath of Celtic’s victory. It is clear that a share of the gate receipts were sent from Turf Moor to Hungarian charities and it is also unquestionable that the trophy was not sent over from Hungary as promised. However, there is ambiguity as to the reason why that silver lighthouse did not find its way to Burnley. Some say it was raffled off to raise funds for the Red Cross, whereas others claim that the trophy was lost after the outbreak of the war.

Regardless of the reasons, all would be atoned for, in May 1988, almost exactly 74 years after the original Budapest Cup clash took place in Hungary. It was then that the Chairman of Ferencvaros, Zoltan Magyar, marked Celtic’s centenary celebrations by presenting his Parkhead counterpart (Jack McGinn) with a large majestic vase in recognition of their triumph. It may not have been a silver lighthouse trophy, but it certainly made amends for the unanswered issue in 1914. 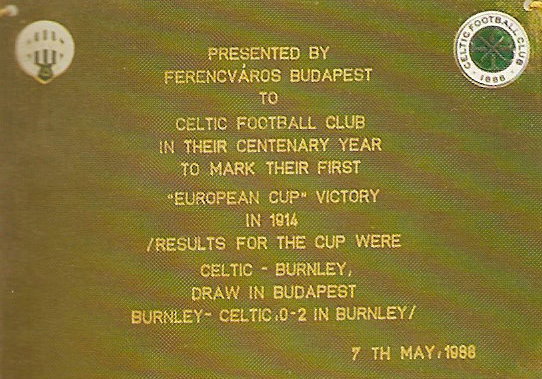 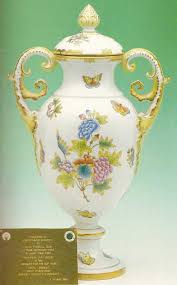 Previous ArticleCeltic v Ferencvaros: Postecoglou Confirms one change, Montgomery in, Bolingoli out
Next Article Photo Of The Day: Danny McGrain Collects A Pennant In The Bernabeu