You are at:Home»Latest»Celtic Foundation confirm Broony badge in honour of legendary captain

The Celtic Foundation have confirmed the charity pin badge for this year will be in honour of departing Celtic captain, Scott Brown. Brown confirmed that he would bring a fourteen year service to Celtic to an end at the close of this season after agreeing to join Stephen Glass at Aberdeen in a player-coach capacity.

However, the Celtic Foundation have dedicated this years pin badge to Broony. Proceeds will be split between Celtic FC Foundation’s Football for Good Fund (FFGF) and Edinburgh Children’s Hospital Charity (ECHC). 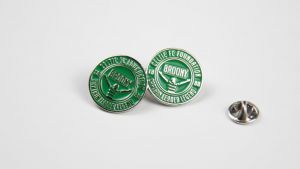 Brown, Celtic’s fearless leader on the pitch, was humbled by the news telling the club website that the badge was a real honour for him.

“This is a real honour for me and it was so humbling when the Foundation approached me with the idea.

“I have not a single doubt that the Celtic support will get behind this charitable effort, as they always do, and I’m very touched that two charities that have been so important to me for many years, will be joint beneficiaries.”

Brown won 22 trophies during a trophy-laden spell in Paradise. Brown and Glass have worked together before. The pair played together at Hibs before Brown completed a move to Celtic in 2007. In that time, Brown became one of Celtic’s most decorated player, became an Invincible Treble winner as well as racking up the most European appearances for a Celtic player.

Brown is expected to make the transition into management and you cannot rule out seeing him in the Paradise dugout at some point, although it will be a shame to see the player leave after this season.