The results of the recent Irish election sees a party with a radical stance on the constitutional question winning a majority of the vote for the first time in decades. Sinn Fein’s largest victory in Ireland was in the 1918 election, when the party championed the cause of Irish Republicanism and sought total independence from Britain. Prior to that shift in the Irish political paradigm, largely brought about through the aftermath of the 1916 Easter Uprising and the conscription crisis of 1918, the contemporary cause of the day was Irish Home Rule. The Irish Parliamentary Party (IPP) advocated the Home Rule cause most vigorously and indeed its central objectives were legislative independence for Ireland and land reform.

These two objectives were also prevalent at Celtic Park in the years surrounding the club’s foundation. One of the founding fathers and the first player to ever kick a ball for Celtic, Dr John Conway, spoke at a reception held in St Mary’s Church Hall to celebrate Hibernian’s Scottish Cup triumph in 1887.

Conway was talking about establishing a football club for the Irish community in Glasgow when he said: “Glasgow Irishmen, we can emulate the Hibernians example not only in social but in political matters as well, so that the goal of every Irishman’s ambition – legislative independence of his country – will soon be attained.”

Not only did Celtic come to fruition later that year, but the club would appoint the great land reformer, Michael Davitt, as its first Patron. Michael Davitt was a convicted member of the Irish Republican Brotherhood, who co-founded the Irish National Land League and served as an MP for the Irish Parliamentary Party. As club Patron, Davitt was invited to lay the first sod of turf at the new Celtic Park in 1892.

The turf was imported from Donegal, and was ceremoniously laid at the club’s third annual sports day event, an event in which MP Timothy Daniel Sullivan also sang the famous Irish rebel song that he had penned about the Manchester Martyrs – God Save Ireland. There were many men involved in founding Celtic Football Club, despite the fact that Brother Walfrid is much better known than his fellow founding fathers. These men played prominent roles in the Glasgow Irish community, within Catholic organisations and Irish political movements.

The focus of this article is on one particular founding father, William McKillop MP, as he had the most obvious political role of Celtic’s founding committee, being a member of parliament, with ideals which tie into the prominence of Irish Nationalism with Sinn Fein’s recent election victory.

William McKillop was born in Dalry (Ayrshire) in 1860. His parents, Daniel and Matilda had emigrated from Glenarm in County Antrim, along with his brother John (fellow Celtic founding father) and seven other siblings, in the mid 1850s. Sticking to the Celtic connection, John was a labourer at an iron works as a teenager in 1871, whilst William, six years his younger, was a cotton picker in a factory.

Fast forward a decade, and the family had moved to the Gorbals, giving William and his brother John an opportunity to commence a business venture as licensed grocers in the city. The business was a success, enabling William to buy the Royal Restaurant on West Nile Street and the pair to open the highly popular Grosvenor Hotel in 1899.

Despite being of Irish origin, the brothers won the catering contract for the Glasgow Exhibitions of 1901 and 1911, becoming two of the most famous businessmen in Glasgow. William, like so many Celtic founding fathers, was key to the survival of the club in the early years. He had been on the club’s first committee and was then elected Vice-President at the 1891 AGM, ousting Belfast born Francis McErlean after two years in the position. William also hosted a celebratory supper for the Glasgow Cup winners in March 1891, when fellow founding father, who Willie Maley claims “Celtic owe their existence,” John Glass presented him with Celtic’s first major trophy. Greater still, William McKillop was elected Honorary President of the club between 1893 and 1897.

While John McKillop looked after the pair’s business, William immersed himself in Irish politics and as Honorary President of Celtic, he received huge praise from Michael Davitt for his efforts in raising money for the Irish Parliamentary Fund. As a leaseholder and guarantor at Celtic, William was of the more business minded club members and was thus a strong supporter of the limited liability proposal and the notion of Celtic de-prioritising charity.

A heated exchange took place at the 1895 AGM, as the battle for the soul of Celtic was raging. The debate centered on the issue of club debts, measured against charitable donations, and William is thought to have responded to a request for charitable donations by describing the question as “clap-trap.” 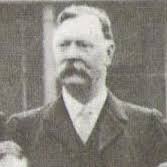 After a long association with the Home Government branch of the Irish National League in Glasgow, William McKillop was asked by newly elected party leader, John Redmond, to stand for the Irish Parliamentary Party as a candidate for North Sligo in 1900.

It is thought that the request was made due to McKillop’s financial prosperity, considering that MPs did not get paid in this era and thus needed to support themselves. Despite residing in Scotland, William obliged and was duly elected, unopposed, to the House of Commons as an Irish Nationalist MP. He held the seat for six years, when for an unknown reason he swapped seats and was elected MP for South Armagh. This South Armagh seat was returned unopposed and was a seat that he held until 1909.

Meanwhile, the successful politician had also become Treasurer of the Irish Parliamentary Party!

Due to the fact that so many people only seem to recognise Brother Walfrid as founding Celtic Football Club, William McKillop is perhaps best known today for the still famous McKillop Cup, which he donated to the Armagh Gaelic Athletic Association in March 1906.

Indeed, the Armagh County Committee of the GAA accepted his offer to present a cup and set of medals for competition among Gaelic Football clubs in the county. The cup was made in Scotland, and was described by the Dundalk Democrat, in 1907, as ‘a very valuable one’ and ‘a triumph of the silversmith’s art’.

Made of solid silver and weighing over 82 oz, the cup is over two feet high! The William McKillop Cup was first presented to the winners of the 1906–07 League, and since 1931 it had been awarded to the county’s Senior Championship winners. The William McKillop Cup was retired by the Armagh GAA in 1995, after being replaced with the Gerry Fagan Cup, though it is still well known in GAA circles today. 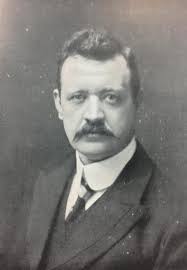 Aside from his political, business and sporting interests, William McKillop married a Miss Fisher, who tragically died in 1892, after just a couple of years of marriage. He was not to marry again until 1908, when he married Rose Dalton, sister-in-law of Willie Redmond.

Willie was an Irish Nationalist MP too, from New South Wales, and was the brother of the IPP leader, John Redmond. Rose gave birth to their only child, Margaret Mary, in May 1909 but by this time William McKillop was suffering from an illness which would eventually lead to his death three months later, at the age of 49.

Rose then took her daughter to Australia, where Willie Redmond lived and Margaret, or Peggy as she was later known, went on to become a pioneer in Australian aviation!

William McKillop’s passing put not only his family, Celtic Football Club and Armagh GAA into mourning, but it was also a loss felt by the entirety of Irish Nationalism, a cause to which he had dedicated his whole life.

William’s obituary in the oldest Nationalist newspaper in Dublin, The Freeman’s Journal, was the epitome of this point. The publication described him as ‘a staunch Irish nationalist who took a lively interest in the Irish movement in Glasgow and was a leading member of the Home Government Branch to which he always gave splendid financial support.’

His funeral took place in Glasgow and over 100 carriages made up the cortege as it headed from St Andrew’s Cathedral to Dalbeth Cemetery.

I took the liberty of visiting his grave in Dalbeth a couple of years ago, and discovered that he is buried with his brother John: 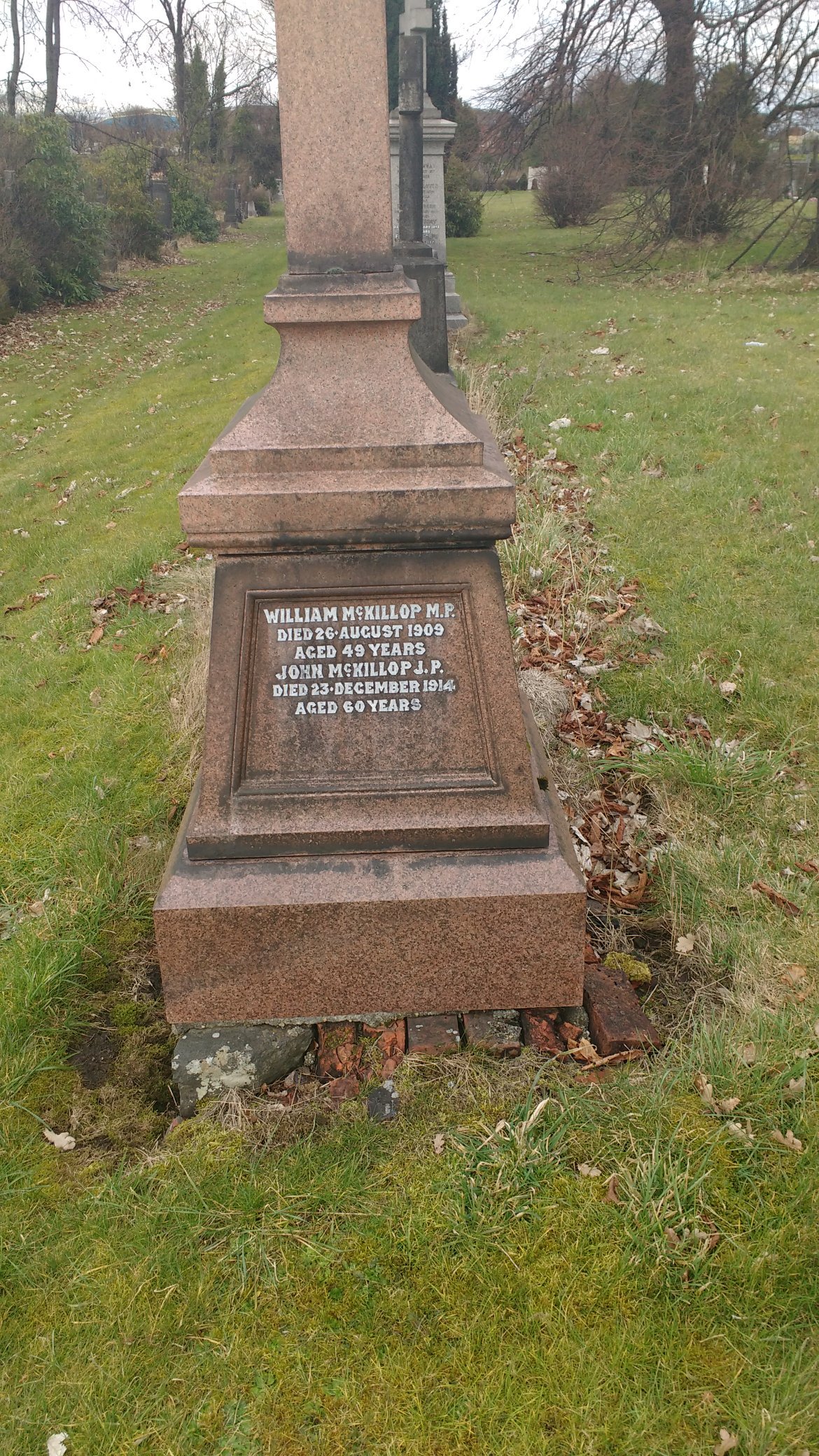 Read more about John and William McKillop and the other forgotten founding fathers of Celtic in this feature on Kerrydale Street.

Previous Article‘Copenhagen will be fitter than ever,’ warns Celtic’s Match Winner Kris Ajer
Next Article Empty Seats or Bigger Bank Balances? It’s Scottish football so there’s only one winner