You are at:Home»Latest»Celtic ‘Good Enough for Rome Result,’ says Elhamed

Hatem Elhamed has said that Celtic have the quality to get a result in Rome, despite coming up against a side that will be out for revenge after the Scottish Champions won 2-1 in Glasgow two weeks ago.

The Arab-Israeli joined from Hapoel Be’er Sheva in the summer and was a bit of an unknown quantity to the Celtic support; however his performances in the Green & White have impressed. Now, Elhamed is confident that Celtic have enough quality in their ranks to gain a positive result versus Lazio.

“After what happened in Glasgow, for sure they want to beat us,” Elhamed said, as reported in The Evening Times. “But I think we are a very good team and we go there to get a good result.

“We have confidence. We feel that now we are a great team. If we win there, we will believe in ourselves even more. It could really be the beginning of something.”

Elhamed reflected on the Europa League campaign so far, that sees Celtic unbeaten in their three opening games and top of Group E on 7 points.

“Getting a point in Rennes gave us good confidence for the next game. We have won two games since then.

“I’m happy that we are top of this group and doing very well. We want to continue this. I hope on Thursday we come back with a good result.

“I think we are a very good team and we want to continue showing this. We should show what we show in every game and in every competition. I hope it will be okay.” 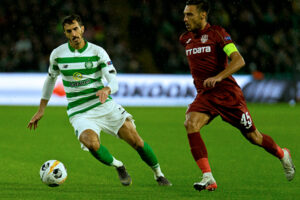 The right-back, 28, is yet to sample football in Italy but he isn’t ready to let his personal achievements get in the way of earning Celtic points in the Stadio Olimpico.

“I’ve never played in Italy so it will be a new experience but one that will be good.

“These things are good as an individual, but I go with Celtic and we want to do a good job there as a team.”

Winning the Betfred Cup semi-final and setting up a Glasgow Derby final will have everyone on a high going to Rome and Elhamed hopes that the confidence from this can be used against the Italians.

“Saturday was the perfect preparation for Lazio which we can now focus on. It’s a big game and we want to go through in this group and into the next round.

“We want to get a good result there.”

Previous ArticleOn This Day: European Edition, We Shall Remember
Next Article 7am Starts to See the Bhoys – The Celtic Star’s Fan of the Week is Back!