You are at:Home»Latest»Celtic Invincible reflects on ‘best decision’

SCOTT SINCLAIR has reflected on ‘the best decision’ of his career in swapping Aston Villa for Celtic. The English attacker joined Brendan Rodgers’ side in August 2016 and left for Preston North End in January this year.

Speaking to Soccer AM today, Sinclair said that he didn’t realise how big Celtic were until he arrived. The 31-year-old won player of the year after an incredible 2016/17 campaign and was a vital part of the Treble Treble winning side.

“It was probably one of the best decisions I ever made in my career, at that time.

“There was always speculation of me going up there at that time and I had thought about other things, like could have stayed in England.

“But once I went up there, I knew how big Celtic was, but I didn’t realise how big it is until you play for them.

“When you do play for them, you realise: “Wow, this is a massive club.” 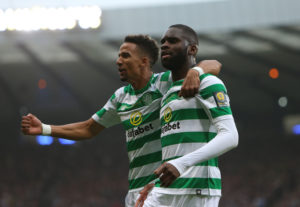 25th May 2019, Hampden Park, Glasgow, Scotland; Scottish Football Cup Final, Heart of Midlothian versus Celtic; Odsonne Edouard of Celtic celebrates with Scott Sinclair after his goal in the 84th makes it 2-1 to Celtic winning the treble

Despite being frozen out of the Celtic first team when Neil Lennon took over on a permanent basis, Sinclair harbours no ill-will towards the club. The player scored 62 goals in 167 appearances, winning nine trophies out of nine.

Sinclair joined Celtic from Aston Villa and on the same day as he signed in 2016, he scored the winner versus Hearts on the beginning of an incredible journey that would see Celtic win everything without losing a game.