You are at:Home»Latest»Celtic kid gets full international call up despite never playing a senior game

It’s not completely out of the ordinary for a talented youngster to get an international call up before they’ve made any kind of senior appearance, it just tends to happen with the smaller nations.

Lee O’Connor certainly seems to have a positive future ahead of him – he was highly rated at Man United and player regularly for the Republic of Ireland U21 side.

He must’ve impressed for the U21’s because The Daily Record has reported that he’s been given a call up to the senior squad for the friendly against New Zealand.

READ MORE: Video: Celtic level it up in Rome thanks to excellent James Forrest strike

It does sound like he’s suspended for the next U21 game which might be part of the reason he’s been given the call up, but it’s still impressive when you consider he’s never played a senior game for club or country.

He’s then expected to link up with the U21 squad again after this game, so it’s not clear if this is just a one off.

It’s tough to figure out what’s his best position at this point. He tends to play at centre back but is just about six feet tall, so he has been pushed out into the full back roles in the past too. 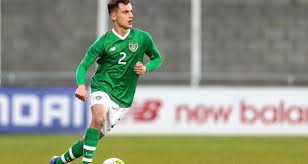 O’ Connor in action for ROI at youth level

That kind of versatility can be a blessing and a curse for a player. It should give him a bigger chance of getting into the first team if they need extra cover, but it can make it harder to nail down a regular spot.

Hopefully he does get a chance to play against New Zealand, it would be intriguing to see how he gets on at senior level.

Previous ArticleVideo: Celtic level it up in Rome thanks to excellent James Forrest strike
Next Article Video: Ntcham crushes Lazio in the final minute with a beautiful dinked finish to win the game