You are at:Home»Latest»Celtic loan watch: Three returning players who deserve a first team chance next season

For a club like Celtic it’s important to win every game and there aren’t any exceptions, so it does make it difficult for young players to earn a chance.

A loan spell is usually a good chance to play regularly and impress before returning to the club, but it’s also easy to be forgotten about if they go to another country where we don’t see them in action too often.

It’s likely that the Celtic squad will be heavily overhauled next year and some big names may come and go, but there should still be chances for young players to impress.

Here’s a look at three loan players who will return in the summer and who at least deserve a chance to stake a claim in pre-season.

It looked like his loan move to Belgium was simply a step to put him in the shop window ahead of a permanent exit, but he’s been thoroughly impressive and a decision will need to be made.

It was recently confirmed by Oostende’s President that they wanted to sign Hendry on a permanent deal, but he’s still holding off from agreeing to that as he looks to assess his options.

The problem will be winning the fans over after he looked far from impressive during his time with Celtic, but as is always the case – good management is about putting your player in the best position to succeed.

If Celtic try to use him as an all-round defender who is going to get on the ball and dictate play then it’s obviously going to be a disaster, but use him to his strengths as a physical ball-winner next to a more cultured player like Ajer and suddenly we could have a good partnership on our hands.

The problems will come when other teams simply allow him to have the ball before shutting off any passing lanes, so it’s important to get players close to him and give him options to ensure that doesn’t happen.

We’ve seen so many players who impress in a loan spell and suddenly it’s the making of them as they develop and learn what they can do well, so he could be worth keeping around if there’s a plan to use him properly.

He was incredibly highly rated at Old Trafford so it did look like a coup when Celtic first picked him up, but there wasn’t a place for him in the team so a loan spell looked like the right option.

You do have to fear that his versatility could hinder him when it comes to locking down a regular role and he could be caught in that awkward spot of not being dominating enough as a CB but also not having the ball skills to play as a true wing back.

Celtic will need to strengthen at right back next season as Anthony Ralston looks set to be the only choice, and O’Connor could come good as a second choice to a more experienced player if he’s given a chance.

He will need to improve going forward but he’s a good defender who is also solid on the ball, so there will be a chance to play him in a more defensive role and that allows the left back to get up and overload on that flank.

If three at the back is still a regular feature then he’s also well suited to that role as the RCB, and it would be good to see him get a proper chance next year.

Celtic will have a lot of options in the centre of the park next year as things stand, but you do have to wonder if everyone will still be around when the season starts.

Scott Brown has reached that point where he’s a year-to-year proposition so you have to expect that his playing time will start to decrease, Tom Rogic and Ryan Christie are often linked with an exit, Olivier Ntcham is out on loan and may not return, while Nir Bitton is often on the edge of the team and he might fancy a change too.

There’s still a core of McGregor, Turnbull and Soro to build on and that could be a solid three, but Robertson would be an interesting one to throw into the mix.

He was particularly impressive during his loan spell with Gillingham in the first half of the season, with Steve Evans talking to the club’s website about how much he loves to watch Robertson play.

He is more defensive minded but he’s not necessarily a typical “holding” midfielder – he has bags of energy and he likes to get on the ball and play progressive passes so there is a lot to admire about his game.

It looked like he would even get a chance with the first team this year as he was recalled from that loan in January, but he’s since been sent out on loan again to Doncaster.

He’s similar to Ewan Henderson in that he’s good enough to deserve some first team chances but it’s easy to see signings coming in and the other big names in the squad limiting their opportunities, so another loan spell would be the best thing in that situation.

If there is some turnover then he deserves a chance to play in pre-season and you know the fans will always welcome a local kid who’s come through the youth system and that has to be considered too. 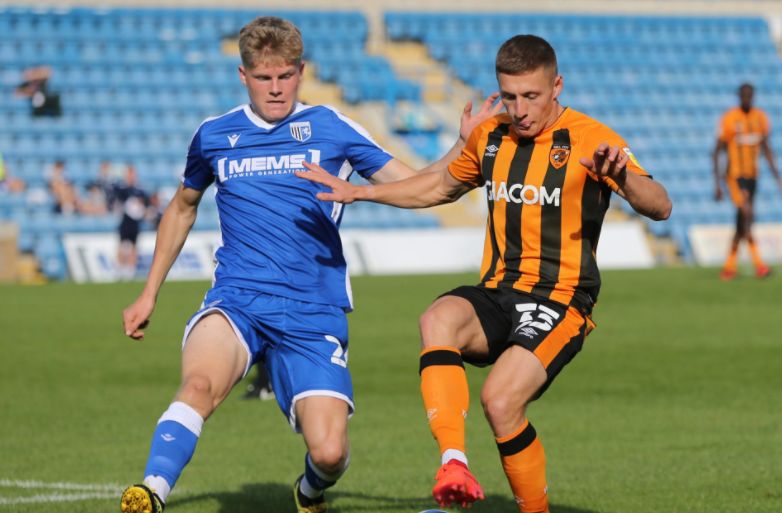 Robertson in action for Gillingham

It’s possible with all three that it could hinge on a managerial change and the club appointing a manager who wants to start over and doesn’t have any preconceived ideas about the current squad.

We often see new bosses favour the freshness and energy that young players bring and using them would also reduce the need to make three more signings, so it could allow the club to focus on quality rather than quantity in the transfer market too.

Previous Article“You can put two and two together” – Pundit seems to miss the obvious point on Odsonne Edouard’s form
Next Article Manchester City to receive £3.5m from Frimpong sale, according to report