You are at:Home»Latest»Celtic march on as Paddy Roberts steals the show in Dingwall

An Extract from INVINCIBLE by Matt Corr – Celtic march on as Roberts steals the show in Dingwall…wonder what Paddy’s up to these days?

Three days after the League Cup semi-final victory over the Rangers at Hampden, Celtic travelled to Dingwall to take on Ross County in a potentially tricky midweek League fixture. With the demanding two-games-per-week schedule now in full flow, Brendan Rodgers took the somewhat unusual – some might say risky – step of making no less than eight changes to his line-up, something normally reserved for early matches in one of the cup competitions against lower-division sides. 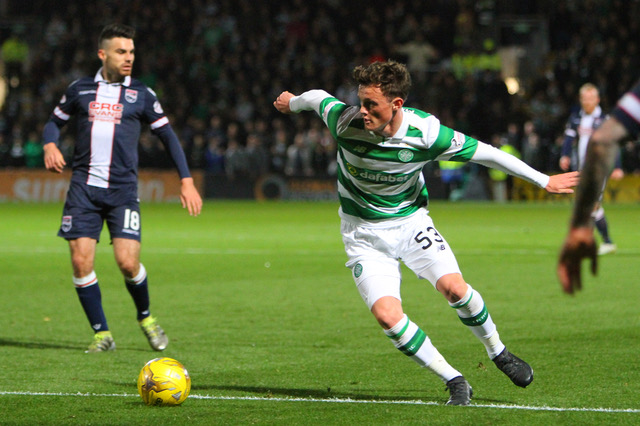 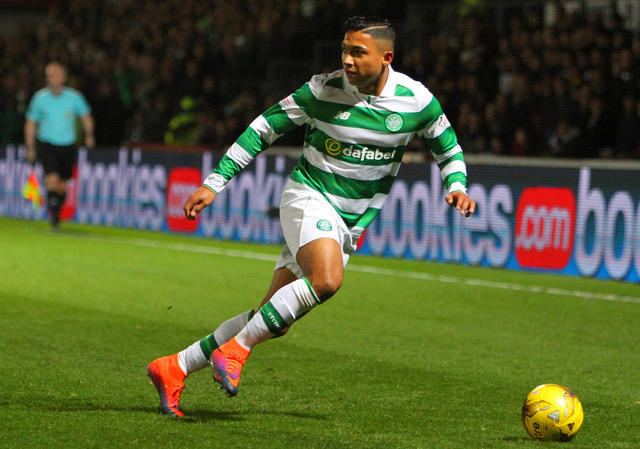 The home side contained three players who had spent time in the Parkhead youth system, goalkeeper Scott Fox, defender Marcus Fraser and winger Michael Gardyne. They also featured Belfast-born Liam Boyce in attack. The former Cliftonville striker had gone on trial with Celtic in 2010, before spending the following season with Werder Bremen.

On his return to Solitude, he scored 29 League goals as the North Belfast side won their first title in 15 years, securing entry into the 2013/14 Champions League. The dream tie then came out of UEFA’s hat as Boyce and co faced Celtic in the second qualifying round, definitely one of the more enjoyable European trips over the past decade. Despite a 5-0 aggregate defeat by Celts ending their European dream, Cliftonville would go on to retain their domestic crown, with Boyce’s performances against the Hoops plus another 21 domestic goals earning him a move to top-flight Scottish football with Ross County in June 2014. 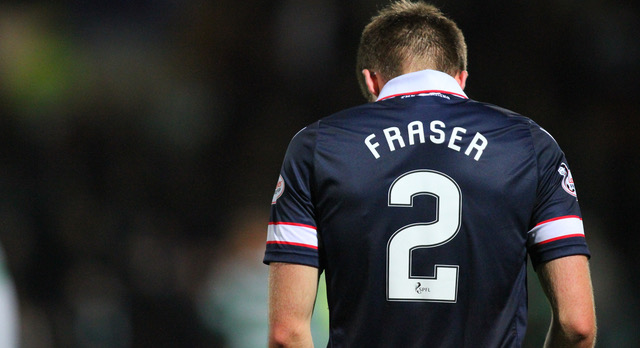 He would hit four goals en route to the Dingwall club’s first-ever major honour, the 2015/16 Scottish League Cup, Celtic their semi-final victims, before going on to become top scorer in the Premiership in this current season with a further 23 strikes, a tremendous achievement for a player plying his trade with a so-called “provincial club.”

Rodgers’ gamble appeared to have paid off handsomely as his revamped side started well, Armstrong winning the ball in midfield to set Roberts off on one of his mazy runs, the winger dragging the ball across the edge of the box before placing his low curling shot beyond Fox and inside the far post. 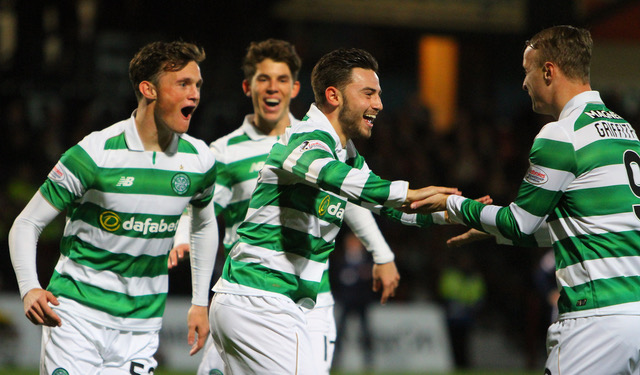 Both sides made and passed up opportunities as the first half progressed, Boyce and Gardyne going close whilst Fox saved well from Griffiths. Despite Celtic’s domination of the possession, as the hour-mark approached it was the hosts who looked the most likely to score, Andrew Davies’ header beating Craig Gordon before rebounding off the far post into his arms, whilst the Hoops keeper escaped a second red card in the space of a few weeks after bringing down Boyce outside the box. As with his challenge in the League Cup tie with Alloa Athletic, a yellow card was deemed sufficient by referee Alan Muir. 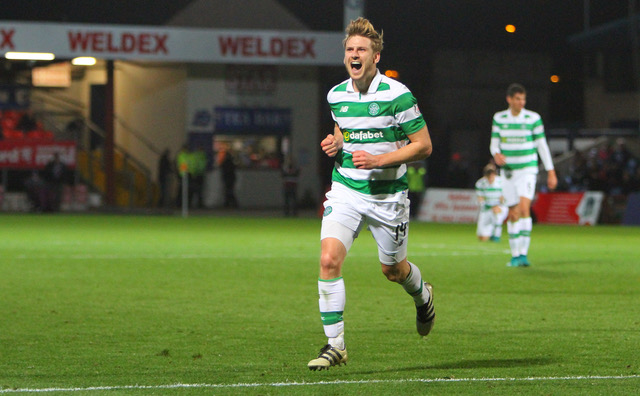 On had come the Celtic cavalry, Dembele and Sinclair, replacing Christie and Henderson, and with seven minutes remaining, the Bhoys finally scored the second goal. Roberts was again involved, setting up Armstrong at the edge of the box for the blond midfielder to send a beautifully-disguised shot across Fox into the far corner. 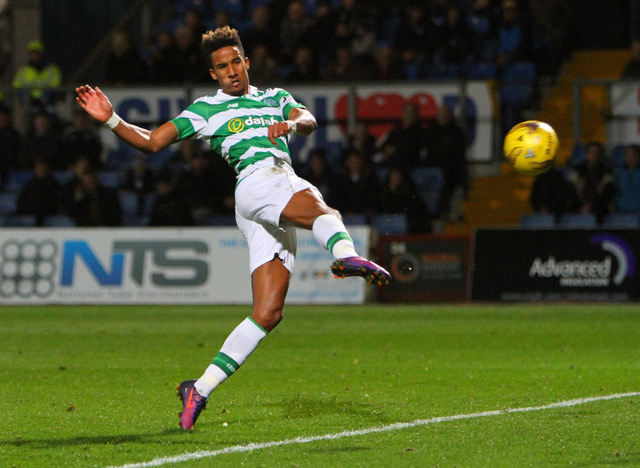 With the home spirit broken, Celtic went for the jugular, Sinclair missing a glorious opportunity before reacting first to Roberts’ deflected drive to lash the ball high past the County keeper in the first minute of stoppage time. There was more punishment to come, man-of-the-match Roberts again producing some magic on the far byline before squaring for the unmarked Dembele to get his name on the scoresheet.

Even the most fervent Celt would probably concede that 4-0 was a cruel outcome, given how much Ross County had contributed to an entertaining match, however, Celtic’s ruthless finishing in those closing stages had earned the victory, stretching the Hoops lead at the top of the table to seven points, following Aberdeen’s surprise defeat at Douglas Park, Hamilton the previous evening. It had been a good night’s work for those of a Celtic persuasion.

Not surprisingly, Ross County boss Jim McIntyre was less than impressed with the decision to allow the Celtic goalkeeper to remain on the field when his side trailed only 1-0. 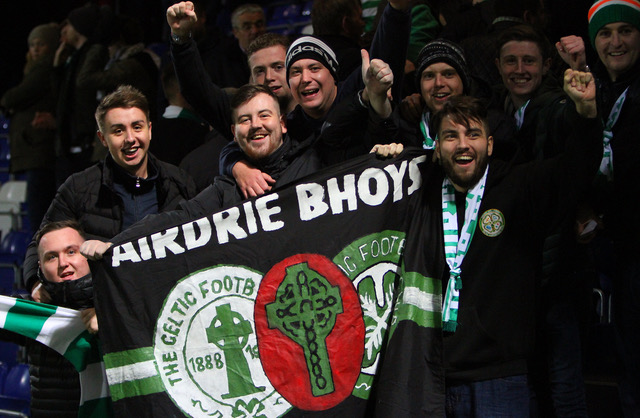 “I think it’s high. It’s reckless. If it’s an outfield player, he might be going off the park. It’s the second time he’s dodged a bullet against us. He had one last year at Parkhead on Jackson Irvine.”

“He’s jumped and mistimed it. The ball’s going away from the goal. It was a good decision by the referee.”

McIntyre was happier with his team’s performance.

“We were well in the game. We made good opportunities to score. Celtic have shown how clinical they can be. We’ve certainly done a lot of things right on the night. The players were excellent. We got off to the worst possible start but the reaction to that start was excellent from us. The players were brave. We were far more like ourselves. It’s been a few weeks since we’ve created so many chances. That level of performance and intensity, if we can produce that on a more regular basis, which I know we can, then the players should take real belief from that.” 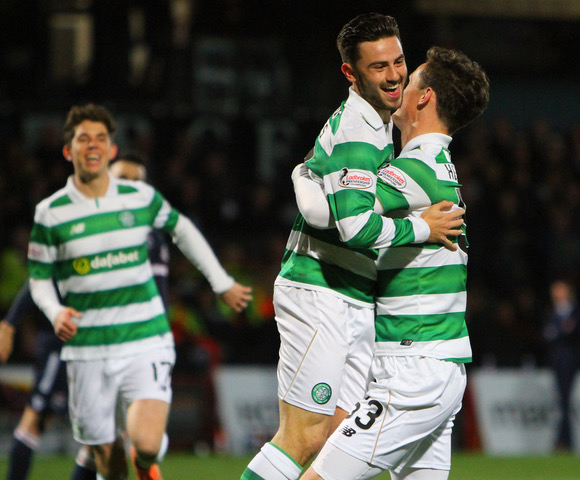 Whilst Rodgers had every reason to be happy with the eventual outcome.

“It was a great victory. It was a very tough game for us. Ross County are one of the best teams we’ve played. Our attacking play was very strong. Defensively we were excellent as well. Give credit to Ross County because they made it very difficult. Good teams start quick and finish strong, and we did. We had a real good start to the game. Again, our fitness comes into the game. Our physicality, the intensity and tempo obviously gets us the goals late on. We still need to improve but I’m pleased with the mentality of the players. We showed that collective hunger within the team and we’ve just got to keep pushing.”

*An extract from INVINCIBLE by Matt Corr, which was published in May 2020 by The Celtic Star.

Previous ArticleOdsonne Edouard – Celtic’s message to Arsenal should be put up or shut up
Next Article Team’s Up – Duffy starts in 3-5-2 with Edouard and Ajeti up front, Christie drops to the bench