You are at:Home»Latest»Celtic on the Road to Hampden but it’s Jock Stein’s Dunfermline who lift the Scottish Cup

The first Celtic match of my lifetime took place on Saturday, 25 March 1961, and saw the Hoops welcome Jock Stein’s Dunfermline Athletic to Parkhead. The Bhoys lined up as follows: 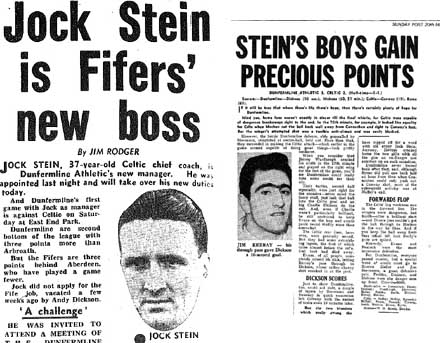 The first goal would go the way of the Fifers after 20 minutes, a shot from former Rangers winger Harry Melrose beating Frank Haffey then clipping both posts before nestling in the net.

Within seven minutes of the restart, Celtic were level, Willie Fernie taking advantage of good work by the on-form Alec Byrne to beat Eddie Connachan with a tremendous strike. And the comeback was completed just five minutes later, this time Byrne the scorer, leaving three Pars defenders helpless before helping himself for a superb goal. It would prove to be the winner, Celts resuming their winning ways at a key point of the season as your 3-day-old author no doubt gurgled his delight. 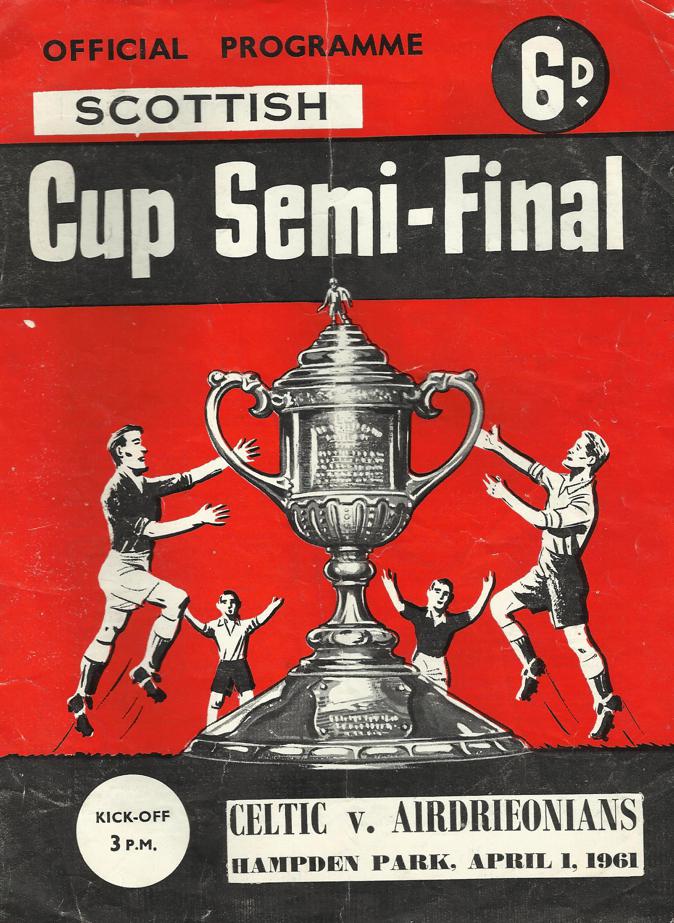 The biggest match of the season so far would take place on the first day of April 1961, the Scottish Cup semi-final with Airdrieonians at Hampden. The Diamonds had caused a shock in the last-round by beating much-fancied Motherwell 1-0 at Fir Park, whilst St Mirren had repeated that scoreline to eliminate champions Hearts at Tynecastle. The Paisley side would be back at the same venue that afternoon to meet Dunfermline Athletic in the other tie. 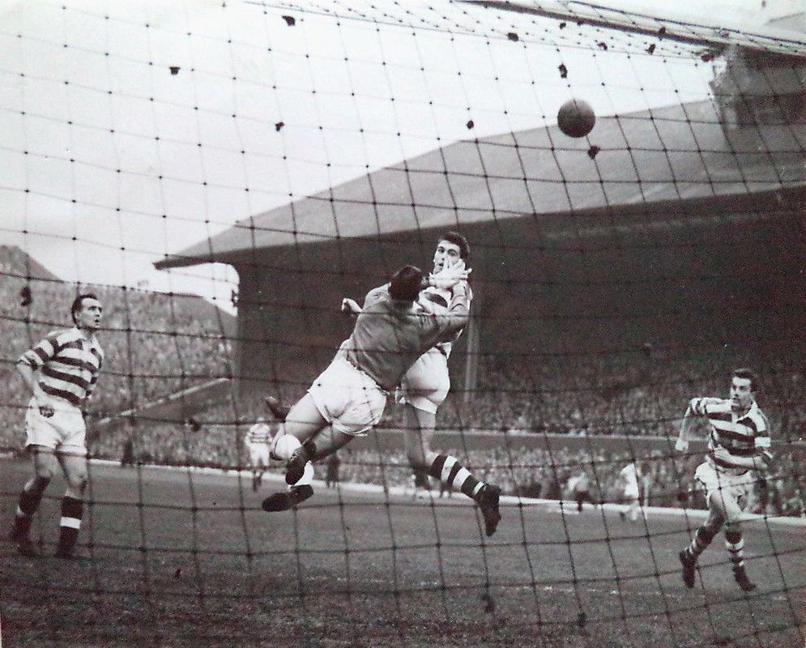 A near 73,000 crowd at Hampden would see Celts overwhelm Airdrieonians to secure a spot in the Scottish Cup Final for the first time in five years. The tie was effectively over by half-time, by which stage the Hoops were already four goals to the good. The goals came in two five-minute bursts. On 20 minutes, John Hughes headed Byrne’s cross past Airdrie keeper Lawrie Leslie, who had lined up at Ibrox behind Crerand and McNeill ten day earlier.

And on 24 minutes, Hughes pounced on a Leslie fumble to make it 2-0, after the keeper had blocked a Willie Fernie effort. Frank Haffey was then called into action at the other end to prevent the Diamond underdogs clawing their way back into the game, the big goalkeeper diving superbly to clutch the hall in the top corner. Eight minutes from the half-time whistle, Stevie Chalmers made it 3-0 with a deft flick and five minutes later, Fernie completed the rout with another wonderful finish. The second half was dull by comparison, other than the powerful Hughes being denied his hat-trick by referee Tom ‘Tiny’ Wharton, after blasting the ball past Leslie. 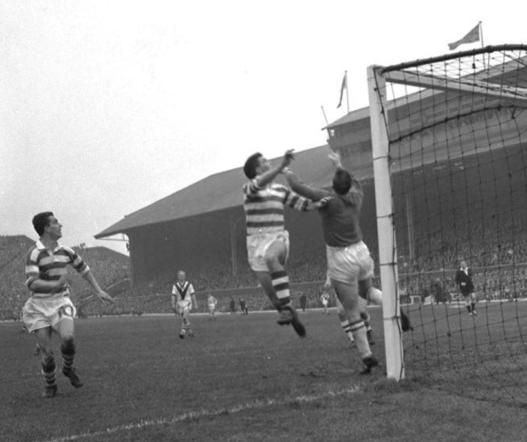 So, the Hoops were in their first cup final since Hampden in the Sun four years earlier, a first Scottish Cup Final since the 3-1 defeat by Hearts the previous spring. Their opponents had still to be clarified, Dunfermline and St Mirren failing to score in the other semi at Tynecastle.

That replay would take place at the same venue four days later, whilst Celtic entertained St Johnstone in the League the same night. Miserable, wet weather kept the attendance at Celtic Park to 8,000, and despite dominating possession on a slippery surface, it was the visitors who opened the scoring through Gardiner on the half-hour.

Celtic’s equaliser when it arrived on 60 minutes was unusual, Willie Fernie’s inswinging corner-kick deceiving Perth goalkeeper Taylor to land in the net, the third successive game in which the veteran inside-forward had scored. There would be no further scoring as the Hoops had to settle for another home midweek draw. Still at least their opponents in the Scottish Cup final were now known, as word came through from Edinburgh that Jock Stein had led Dunfermline Athletic to their first-ever major cup final, following a 1-0 win over St Mirren at Tynecastle. 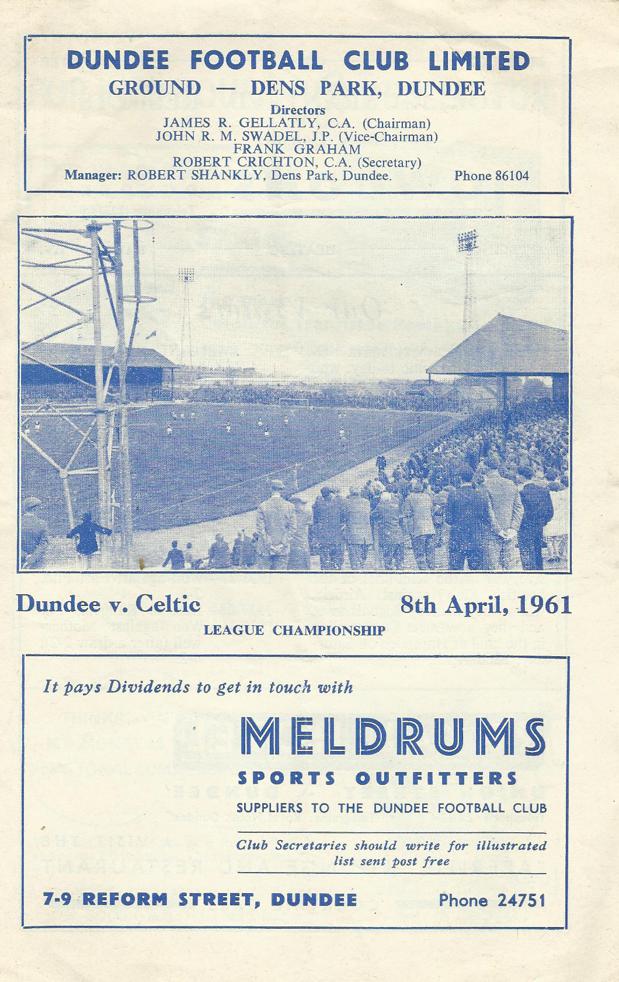 On Saturday, 8 April 1961, it was back to League action as Celts travelled the road and the miles to Dundee for a fixture at Dens Park. The Dark Blues boasted a fine young team who would be Scottish champions within twelve months, including centre-half Ian Ure and striker Alan Gilzean, both of whom would soon earn big-money moves to Manchester United and Tottenham Hotspur respectively, albeit Ure is perhaps better known for his time with Arsenal. A tight game was settled by one mistake after half an hour’s play, Alex Hamilton’s passback to Pat Liney evading the home keeper, allowing Stevie Chalmers the easiest goal of his career.

The Bhoys would remain on Tayside that weekend as the next fixture saw them play 200 yards along Tannadice Street just two days later. There is a famous photograph of the team bus rolling up to the stadium with the players emerging already Hooped up, perhaps the work to replace the old main stand the reason behind that scenario. 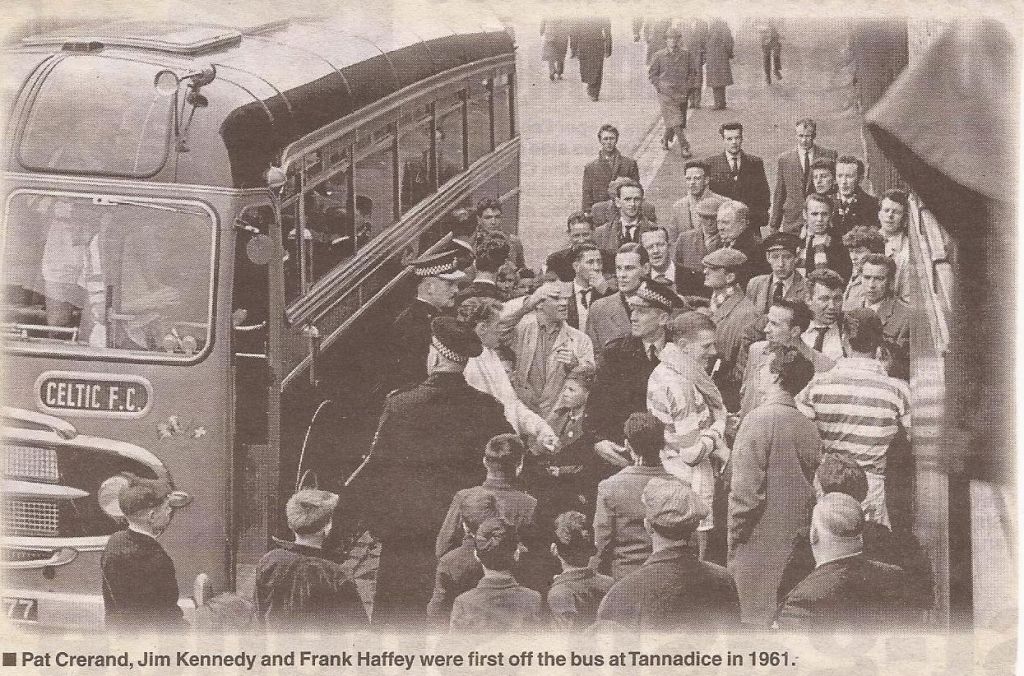 United featured Celtic legend Neil Mochan at centre-forward, and he rolled back the years with a virtuoso performance, his rocket shot blocked by Haffey who could only look on helplessly as Gibby Ormond bundled it home for 1-0 just before the half-hour. A jaded-looking Celts looked to have lost their long unbeaten record until with seven minutes left to play, John Hughes nodded home a cross from Charlie Gallagher to earn the Bhoys a share of the points.

Two days later, Tuesday, 12 April 1961, Russian cosmonaut Yuri Gagarin became the first man in space and the following weekend, Celtic goalkeeper Frank Haffey probably wished he had gone with him, after shipping nine goals at Wembley in Billy McNeill’s first full international appearance. It was hardly the ideal preparation for both Celts ahead of the biggest club match of their young careers, the following Saturday’s Scottish Cup Final against Dunfermline.

Nevertheless, both were chosen in an unchanged Celtic team to face their old reserve coach Jock Stein in front of 113,000 at Hampden on Saturday, 22 April 1961. The match failed to produce any goals and is best remembered for two fantastic saves, one at either end. Early in the first half, a Paddy Crerand rocket was diverted by the head of John Hughes towards the top corner of Eddie Connachan’s goalframe. 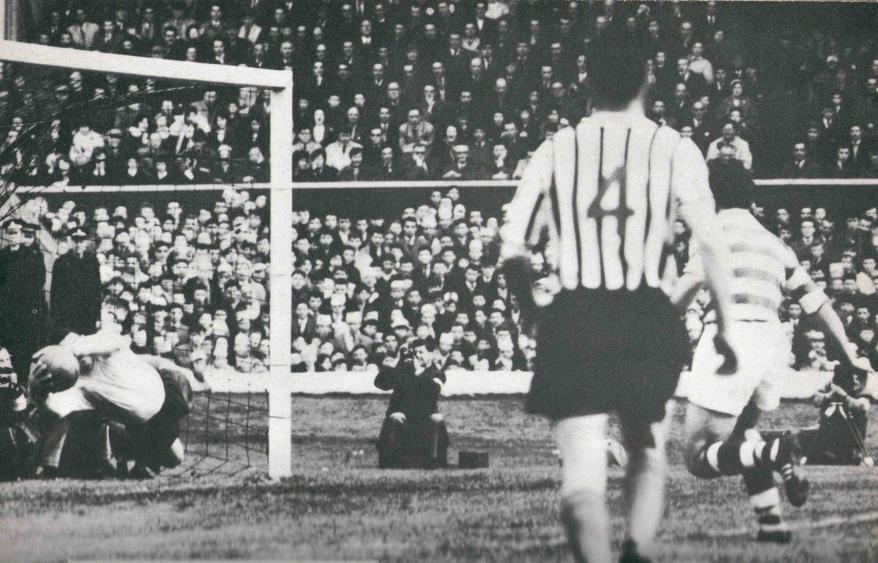 The cheers of tens of thousands of Celtic supporters were stopped in their tracks as the keeper leapt to clutch the ball at the junction of post and bar, an incredible save. Then in the last minute of play, it was his opposite number Frank Haffey’s turn to shine. The man who had been the subject of ridicule all week for his part in the Wembley debacle single-handedly prevented the cup heading for Fife on that Saturday evening, somehow stopping a goalbound Peebles effort from crossing his line. All to play for then in the replay scheduled for four days later.

There was a Celtic emergency on the day of the replay, Wednesday, 26 April 1961, as Hoops defender Jim Kennedy was rushed to hospital suffering from appendicitis. His place would go to 20-year-old full-back Willie O’Neill, a baptism of fire for the youngster. Like the first game, the replay would be a tale of two goalkeepers, although sadly for Haffey, the misery following the fallout from Wembley would continue at Scotland’s national stadium.

Celtic lined up as follows, in front of 88,000, for the first major final of Billy McNeill’s career.

Connachan was again in inspired form, defying the eager Hoops forwards time after time in the first half, as both sides again failed to break the cup final deadlock by the interval. The game turned within a minute midway through the second period. For once, Stevie Chalmers’ shot had beaten the incredible Connachan, only to be handled by a defender, Celtic appeals for a penalty kick waved aside by referee Hugh Phillips. 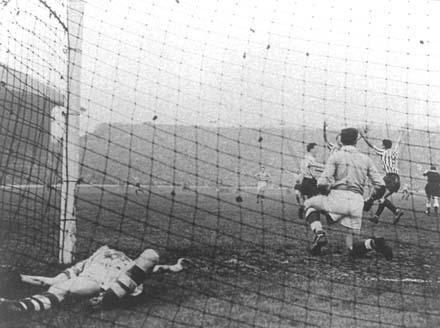 As often happens, the Pars then went straight up the field to take the lead, centre-forward Davie Thomson, a replacement for youngster Dan McAlindon from the Saturday game, on one knee as he dived to head low past Haffey for 1-0.

With six minutes remaining, Connachan broke Celtic hearts yet again, this time the inspired keeper somehow keeping out a 20-yard thunderbolt from Paddy Crerand. As the Hoops piled forward in a desperate attempt to level the tie, there was another kick from the football Gods for poor Frank Haffey. There seemed little danger in the 88th minute, as a long ball from midfield dropped into his box, the Celtic keeper favourite to reach it ahead of Charlie Dickson. However, this time the under-pressure Celt misjudged the bounce of the ball badly, left in the Hampden mud as the Pars forward carved his own name into Dunfermline folklore.

The sight of Jock Stein running delightedly from the Hampden dugout to embrace his players would be an all-too-familiar one as the sixties progressed, with Billy McNeill often the first port of call for the Big Man.

Sadly, however, the man who would be known as Cesar would not be the recipient of a hug from the man in the white trench-coat on that damp Glasgow evening. He would look on dejectedly as the Fifers collected their winners’ medals, one of the saddest tasks for a professional player to endure.

He would not know then that he would be leading his Celtic players up those same Hampden steps on countless joyful occasions over the next fourteen years, as an unprecedented era of success was being devised by those who write football’s scripts.

They say that what doesn’t kill you makes you stronger.

In Billy’s case, the pain and the manner and indeed the memory of that defeat would build an incredible determination and will-to-win which would transform the lives of those who trudged disconsolately home in their green-and-white favours over the next two decades and beyond, first as a captain and latterly as the manager of Celtic Football Club.

He would become respected and adored as a man who encapsulated the very essence of what it means to be ‘a Celtic man.’

For many, including your author, just one month old at that time, he would become and will forever remain Mr Celtic. 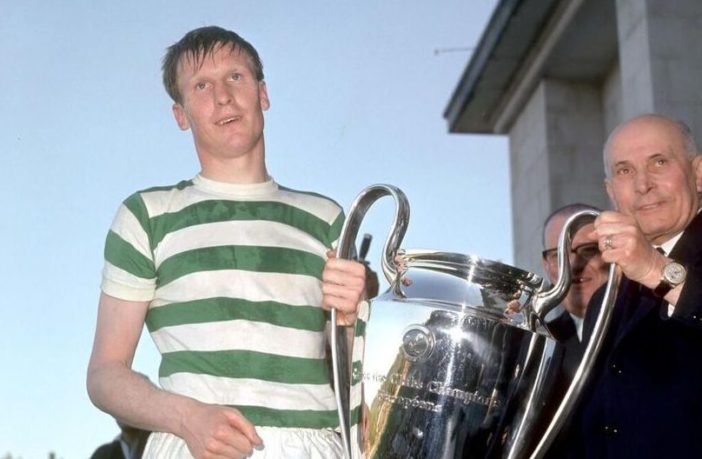