You are at:Home»Latest»Celtic Open the Floodgates with a Devastating Spell of 4 Goals in 5 minutes

Your recent articles on incredible Celtic matches of the sixties reminded me of the events of 30 November 1968 when the following Celtic team lined up to play Hibs at Paradise:

They won 1-0 with Davie Hay getting the goal. Seven of that team would certainly be considered for any all-time great Celtic team.

Meanwhile I was at Easter Road to witness an unbelievable match where the Celtic first XI took on their Hibs counterparts in the old Scottish First Division, represented by:

I positioned myself in the middle of the huge central enclosure which towered around the famous sloping Easter Road pitch at the time – a grandstand view of the action.

Jim Craig describes this game as “one of the most incredible matches I ever took part in during my career at Celtic.” Hibs had a great side which included Pat Stanton, Jimmy O’Rourke, Peter Cormack, Pat Quinn, Eric Stevenson, Alan Cousin, Joe Davis and ….Joe McBride, recently signed from Celtic.

Around that time in Europe they defeated Sporting Lisbon by 6-1, Napoli by 5-0 and in earlier years had reached the semi final of the inaugural European Cup and had eliminated Barcelona from the Fairs Cup. In Scotland they had recently recorded league victories over Rangers at Ibrox and were to go on to trounce local rivals Hearts by 7-0 at Tynecastle.

Jock Stein had managed Hibs before he moved to Celtic and had left them with the mark of greatness. 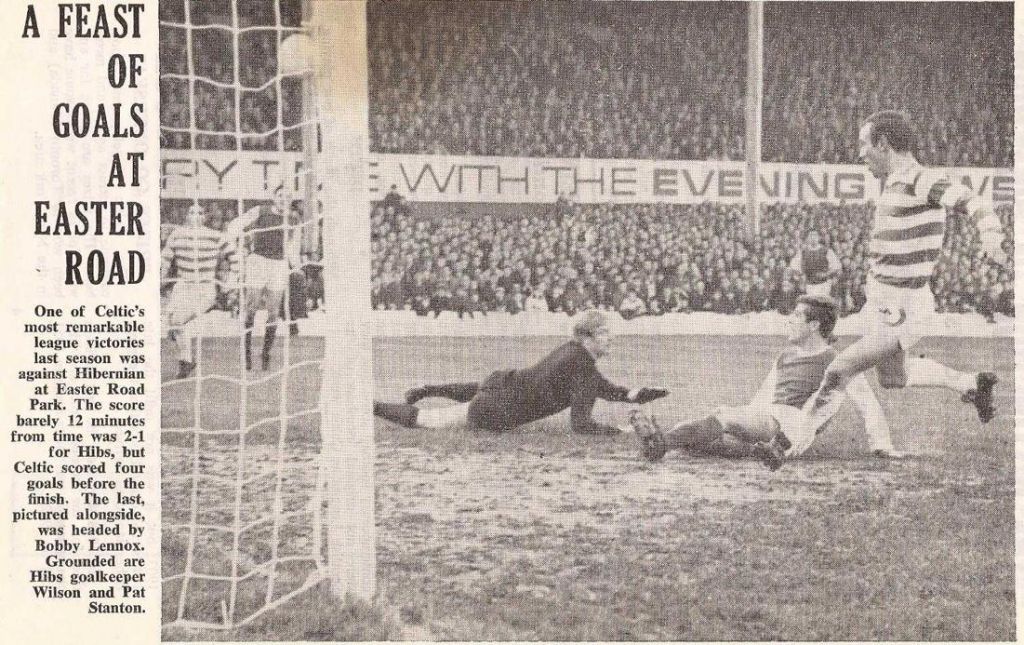 Celtic began the match shooting up the famous slope and after eight minutes big Tam Gemmell gave them the lead from the penalty spot. Fifteen minutes later Hibs roared back and equalised through a header by…Joe McBride.

The play was quick and tense but no further goals were scored in the first half. Both sides went hammer and tongs after the interval, the ball zipped around the park and chances came and went at both ends.

Hibs finally made the breakthrough when Joe Davis put them 2-1 ahead with a penalty in the 74th minute. No one in Easter Road could have imagined the outcome as Hibs then looked well capable of seeing the game out safely. What came next was simply earth shattering. Talk about roofs falling in.

Celtic went up two gears with a devastating spell of four goals in only five minutes as Hibs buckled under intensive pressure. McNeill (79), Hughes (80), Lennox (82), Hughes again (84). This was a magical, astonishing climax to the match, finishing 5-2 for Celtic.

There must be a fair few people out there with memories of this absolutely outstanding football match.

If you have any particularly special Celtic game that you attended and you’d like to write about, we’d love to hear from you. Just send over your memories and stories of the game to editor@thecelticstar.co.uk