You are at:Home»Celtic Women»Celtic Park to host SWPL matches during World Cup

This winter’s World Cup in Qatar would ordinarily see Celtic Park lie dormant, as Scottish football closes down for the duration of biggest tournament in World football. Yet it appears Fran Alonso and his Celtic side may be able to take advantage of the remainder Ange Postecoglou’s side heading to Australia, whilst the likes of Daizen Maeda, Kyogo, Cameron Carter-Vickers, Josip Juranovic  and maybe Reo Hatate and Matt O’Riley seek glory with Japan and Croatia in Qatar. 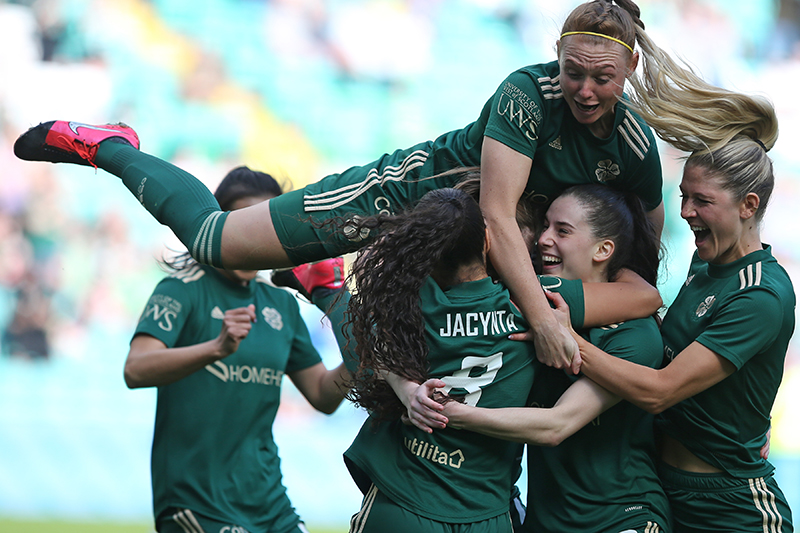 Speaking to The Celtic Star and Cynic Women – alongside Chinese media – at this week’s press conference ahead of Sunday’s 12pm SWPL encounter with Spartans, Celtic FC Women head coach Fran Alonso was asked by this site about his Celtic side returning to play at Paradise this season. This after last season’s encounter with Hibs saw a bumper crowd attend, and witness a Celtic side show just what they can produce with the Celtic fans behind them – and on a pitch, the size of which brings out the very best in Alonso’s high intensity expansive style of play.

And it appears a return to Celtic Park is on the cards for Alonso and his double cup winning Celtic FC Women’s team.

“The club is working towards it. I don’t know how many games but I know that they are working towards having at least one game at Celtic Park. I would love that,” Fran Alonso told The Celtic Star. “I think it’s a good opportunity for Celtic as a club for the league, as a league to help increase the attendances on the women’s game.”

“So far this year we are beating records, not only in the Euros but now here in Scotland we are breaking records of attendance which makes me very happy. All of us have to congratulate including you yourselves guys (The Celtic Star and Cynic Women) because between all of us we are growing the women’s game and I think we have to keep pushing and have to make it better.

“But I would expect many of the teams in the league to play games in their main stadiums during the World Cup, I would love to see that.”

Playing as many games as possible at Celtic Park is the perfect way to help raise the profile of this Celtic team, but also to attract more interest in the women’s game in Scotland in general.

Indeed, the attendance of Chinese media at Fran’s press conference is another sign of the women’s game in Scotland attracting an international audience – and much of that is down to a well-kent face and a new arrival in Fran Alonso’s refreshed squad this season. Last season Shen was a standout performer for Celtic and no more so than in the Scottish Cup Final extra-time win over Glasgow City.

Here incidentally is how the Glasgow City media team saw the Cup Final, check it out for any ‘whit’s the goalie daein’ Tom?’ moments…

With Celtic down to ten after the sending off of now departed Jodie Bartle, Shen’s herculean efforts in that final perhaps didn’t get the same headlines as Izzy Atkinson’s winning goal, but they were just as vital when it came to Celtic lifting the trophy for the first time. Shen was outstanding that afternoon, and it was the culmination of constant improvement throughout last season’s campaign.

This season Fran Alonso has returned to the Chinese market as part of his summer squad rebuild. And wearing this season’s number 28 will be Shen Menglu – or Lu, to avoid any confusion with Shen Mengyu.

The 20-year-old left-sided player joined Celtic in this transfer window from Ourense having previously also played for Sporting Lisbon. Used as a trialist in pre-season while awaiting her visa clearance, prior to signing officially, Lu has since has been training well according to Fran Alonso. And although tomorrow’s game with Spartans may come too soon for Lu, it seems only a matter of time before she gets up to speed, and will no doubt be looking to make a similar impression as compatriot Shen did last season. 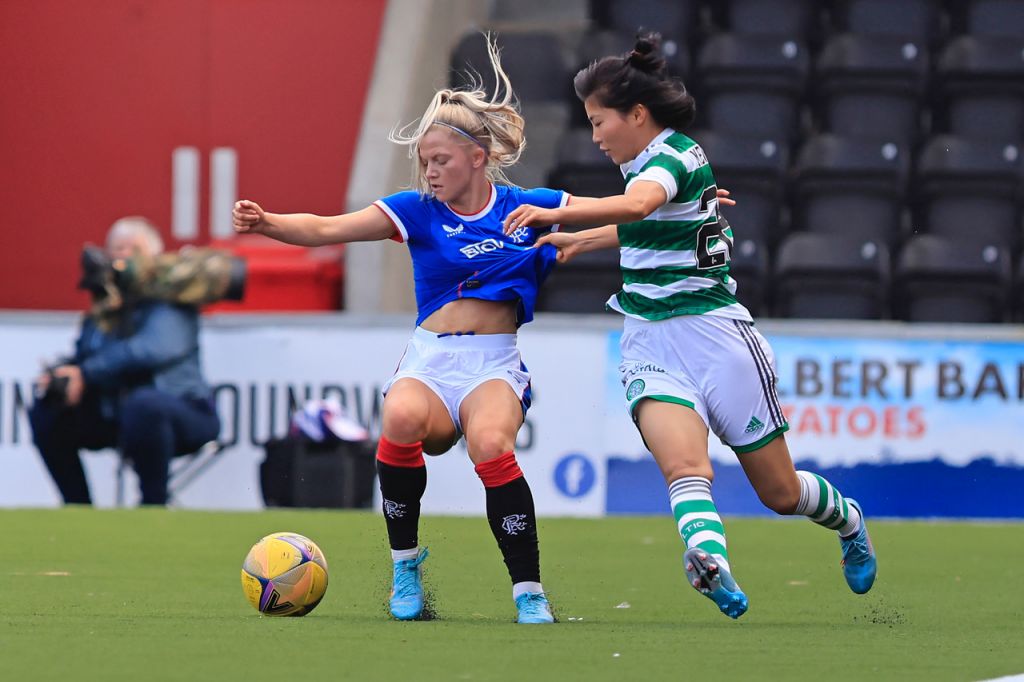 “Yeah, so Shen Menglu, we call her Lu, she is a very good player,” Fran explained to the Chinese media in attendance at the pre-match Media Conference. “She is learning English and every time a little bit better, she’s not perfect yet and she’s now in this period of adaptation for a league that is much more physical.”

“She played in Portugal but this is a more physical league but she is getting better, not only with her language but also in training, she is being more aggressive, she is better at duals so we are happy with her.” 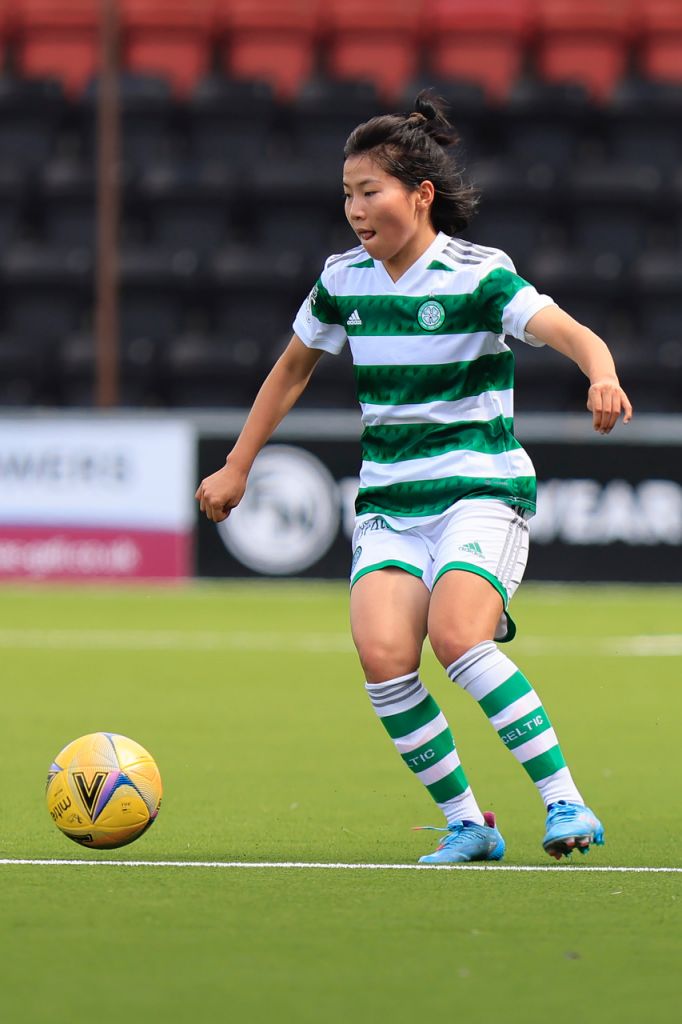 Lu on the ball

“I think it’s a little bit too early for her to start but she is getting better and very soon she’ll be able to fight for a position in the first eleven and we will be able to see more of her. But we are happy with her.”

Signings such as Lu and Shen have shown Fran Alonso is willing to cast his net far and wide when it comes to strengthening his squad – with the added advantage coming by way of Chinese media interest in the club.

Such deals, as long as the players perform when given the chance, can only benefit the club’s profile and in turn lead to more talented players seeing Celtic as a positive destination for their playing careers – and a few more games broadcast from Celtic Park can only increase such attraction still further. 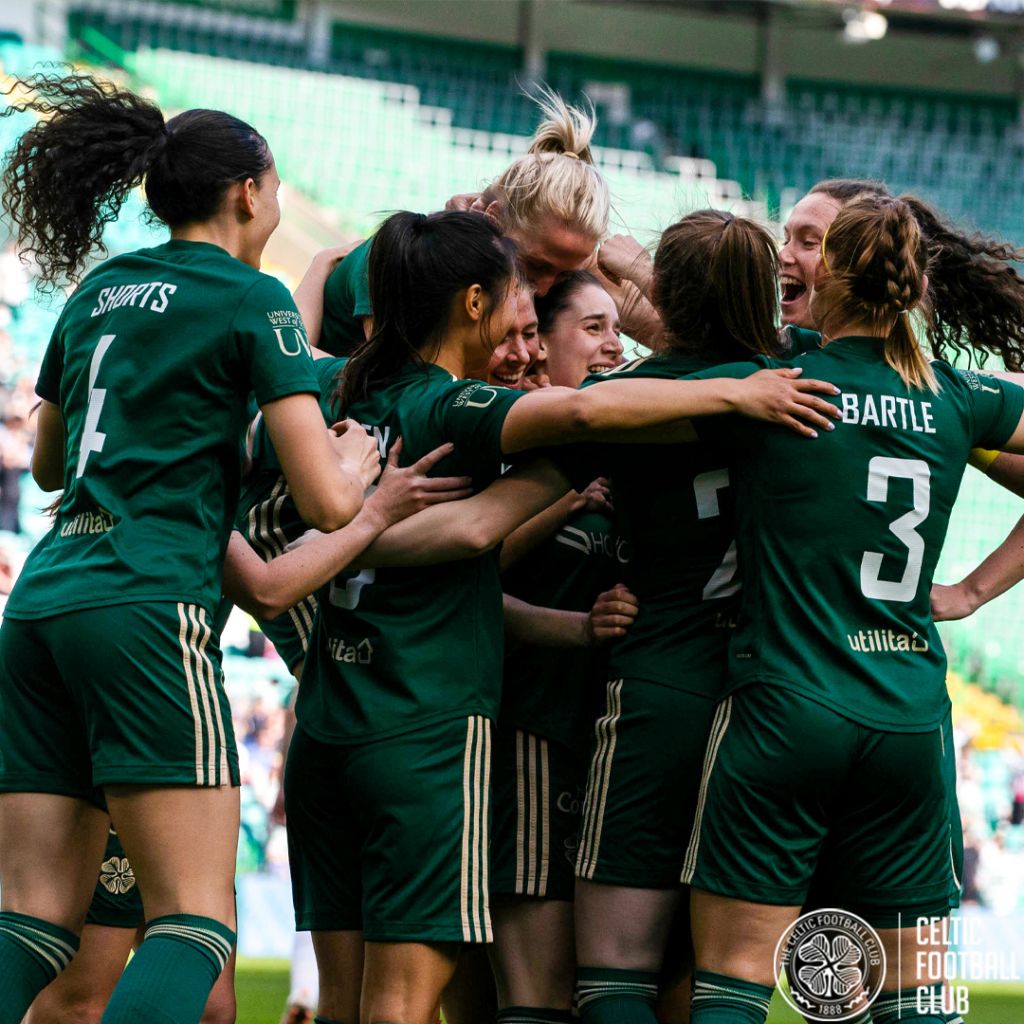 Hopefully Celtic as a club will recognise opportunity knocks with during the men’s World Cup and we take advantage of the shutdown and get the Celtic FC Women’s team performing at Paradise more often this season.

First up for Celtic however, is Spartans tomorrow afternoon. The game has been moved to a 12pm kick-off and affords supporters the chance to watch Fran Alonso’s side take on their Edinburgh opponents in Airdrie, with enough time to head to Celtic Park before Ange Postecoglou’s side also face an opponent from the capital in the shape of Hearts.

Fran Alonso and his Celtic FC Women’s team will now hopefully have the backing of a big Celtic support as the Hoops look to continue a start to the season which has seen the goals flow and the backdoor remains bolted.

You can buy tickets for this one in advance – by following this LINK  – or you can pay at the gate on the day. Tickets cost £8 for adults and £4 for under 16’s.