You are at:Home»Latest»Celtic receive Cameron Carter-Vickers boost ahead of Leipzig games

Ange Postecoglou has refused to rule out Celtic’s Cameron Carter-Vickers ahead of the Champions League double-header against RB Leipzig. The defender missed the games against St Mirren and Motherwell through injury but the manager stated that he was not far away from making his return.

Speaking after the 2-1 win yesterday, Postecoglou confirmed that the USA Internationalist was receiving treatment for an injury but that he would be giving him every chance to be involved over in Germany on Wednesday.

“Cameron got some treatment again and will get some on Sunday. We will see how he is Monday and Tuesday and make a decision. 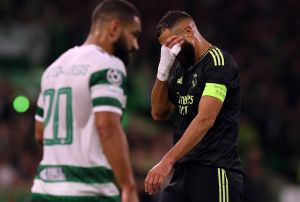 “So I am not going to put him in unless he is absolutely right because it would be silly of us to put him in and then lose him for another few games.

“Particularly with Carl Starfelt out for at least another couple of weeks. Cam’s pretty good. If he is ready to play he’ll put his hand up, I don’t need to question that.

“But we have got to make sure we make the right decision. We will give him every chance.”

The fact that the manager isn’t ruling him out is a positive, especially as he sys that he is nearing a return to fitness. Celtic have missed the pairing of Carl Starfelt and CCV, who were integral in last season’s success.

Celtic are at McDiarmid Park on Saturday before hosting the Germans at Celtic Park in the Champions League on Matchday Four. The games against the Bundesliga outfit will be pivotal in deciding whether Celtic are involved in European football beyond Christmas, with Ange’s side sitting one point ahead of Marco Rose’s side.

Ange will want his best defenders available for the games this month as they will determine Celtic’s progress in a number of competitions. Risking burn out or further injuries for Carter-Vicker will certainly be on Postecoglou’s mind as he looks to navigate Europe, the league and the League Cup.