Dundee sealed their promotion to the Premiership tonight thanks to goals from Danny Mullen and Lee Ashcroft. This means that Celtic will be visiting Dens Park next season but it also means that the SPFL can explore a ban on plastic pitches in the top flight.

Celtic supporters will be eyeing the return to Paradise next season after over fourteen months out of the ground, home games will be the priority but fans will also have their eye on potentially returning to away games. Tonight’s Premiership play-off result in Ayrshire means that Kilmarnock will be playing in the second tier after Dundee beat them 4-2 on aggregate. This means that Celtic will (likely) be making two trips to Dens Park next season. 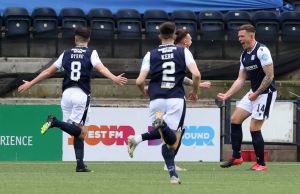 Hamilton Accies and Kilmarnock relegated. An 11-1 vote to banish artificial pitches from the Scottish Premiership is now winnable.

This is a boost because it is a grass pitch, much like that of Hearts’ Tynecastle Park. Killie and Hamilton, the relegated outfits, were two of the three clubs that play on plastic pitches in the top flight. However, with the news that both Killie and Hamilton are going down, top flight clubs can now ban the horrific surfaces due to the 11-1 rule. With Livi the only non-grass pitch, the league may see an opportunity to prohibit clubs using grass pitches in the future. This could be a seismic result, ridding the league of the ugly, dry and brutal artificial surfaces. With that said, the league would need to offer support for the clubs that are promoted and use plastic pitches so that the financial burden on them is eased slightly.

When supporters return, there will be no Killie pies in the top flight.

Previous ArticlePeter Grant – the talented and qualified name that has been linked with a Celtic return
Next Article Photo: Leigh Griffiths makes surprise appearance during Dundee celebrations