You are at:Home»Latest»Celtic set to raid Bournemouth for key trio after Eddie Howe meeting – report

Celtic look set to raid Bournemouth for three members of staff after a meeting with Eddie Howe in the last twenty four hours. According to The Daily Record, the 43-year-old met with Dominic McKay to finalise the deal to take him to Paradise but also request that the Parkhead club make formal moves for Richard Hughes, Stephen Purches and Simon Weatherstone.

Hughes is expected to join his boyhood club in a Chief Scout capacity with Celtic still eyeing Manchester City’s Fergal Harkin for the Director of Football role. Weatherstone and Purches are expected to join Howe in the dugout. Bournemouth will likely offer little resistance to the move as they look to restructure themselves after a failed play-off run. 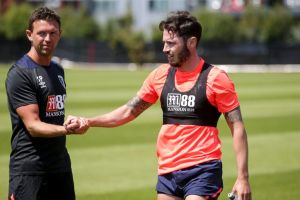 Another name that has been suggested as joining Howe’s backroom staff is Peter Grant. The former Celtic midfielder recently left his role at Alloa and whether he wants to continue as a boss in his own right with the Falkirk and Dunfermline vacancies or whether Howe wants to bring him into the club as a coach remains to be seen. The Celtic Star wrote earlier about Grant’s qualities and CV which stand him out as an excellent coach.

Peter Grant – the talented and qualified name that has been linked with a Celtic return | The Celtic Star https://t.co/hpPh3WfGyo

The announcement of Howe and a new Director of Football is expected this week as fans begin to look forward to a new season, a new manager and hopefully a new era of success.