You are at:Home»Latest»Celtic Shareholders Latest – ‘Any individual or legal entity with capacity to act may have recourse to the services of the CAS’

At the time it made you wonder. 25 November 2019 and the Celtic board release a statement confirming a partial closure of Celtic Park. Announced late on a Monday night and less than two days before an AGM, a meeting where the board was very likely to face some serious questions over the way it had defended the honour of the club when it came to Resolution 12.

Smoke and mirrors came mind and this time the smoke wasn’t from the Green Brigade. They were the ones being used as the distraction.

Fast forward to yesterday and the SFA appear to be operating by the same playbook. As Celtic fans celebrate or indeed recover from the celebration of a ninth successive title the story breaks, with the distraction playing out the SFA release their statement.

Stephen McGowan at Scottish Daily Mail tweeted the news as reported yesterday on The Celtic Star: “SFA rule Rangers being awarded a Euro licence in 2011/12.

‘Following consideration of the implications …. including legal opinion, it was the board’s unanimous position that this matter should not be referred to CAS. The SFA now considers the matter closed.’”

The similarities in approach could well be coincidental of course and if anyone believes that turn round and I’ll do up your buttons, reaching the ones on your back isn’t a one man job.

Persistence beats Resistance was the strap-line that a group of Celtic shareholders used challenge the questionable decisions at the Scottish FA that allowed Rangers FC to gain a licence to play in European football in 2011-12 season when they should have been disqualified due to having outstanding social taxes. 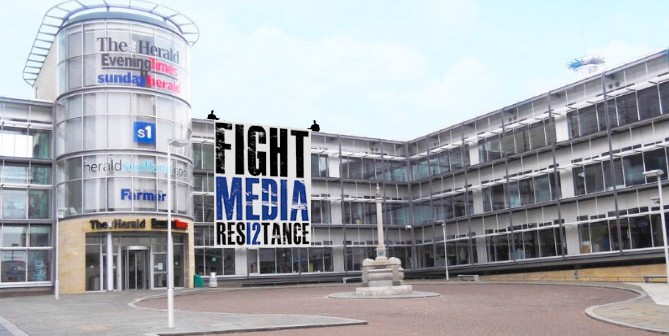 What now seems evident is that resistance has announced itself the winner jumped on the ropes and raised its gloved hands in the air. There are a few in positions of power in the Ibrox boardroom who will be acting in a similar manner.

With the SFA considering the matter closed and wishing to avoid referring the case to CAS – for reasons of self-interest rather than good governance – it looks like the battle fought by that group of shareholders is at an end. In normal circumstances when a governing body takes a decision like this the club itself could progress the matter. Following November’s AGM Celtic made it clear they had no interest in the matter and the Resolution 12 was voted down as recommended by our own board. You’d almost think there was some clandestine agreement in place wouldn’t you?

In such instances you’d perhaps think the mainstream media would open up a full and frank debate, yet if history shows us anything in that regard, an appetite for this debate is lacking in the fourth estate.

If you want to debate null and void you can bet your last thin dime that Tom English et al will open the airwaves to discuss the ins and outs. When it comes to matters like Resolution 12 there seems a strange apathy engulfs those employed to shine a light. Don’t hold your breath for extended Saturday Sportsound or daily podcasts with Darryl Broadfoot’s historical insight when it comes to this subject matter. A radio silence is bound to descend.

So what now? Can the requisitioners refer the case to CAS themselves? Well they are certainly NOT going to be giving up without one helluva fight. This matter, we hear, is very far from being over.

According to their website ‘Any individual or legal entity with capacity to act may have recourse to the services of the CAS. These include athletes, clubs, sports federations, organisers of sports events, sponsors or television companies.’

Would those campaigning be deemed as having ‘capacity to act’ possibly not, though greater minds than I may well have a different interpretation. This is where the debate is going and there is a distinct possibility that football supporters of Celtic and many other clubs could be mobilised to crowd fund the legal challenge.

Alternatively, perhaps a line in the sand has been drawn, perhaps the battle is lost for now at least, and possibly the positives that can be taken is that should the current board at ‘the’ Rangers decide a repeat of financial oblivion and a reborn status is a possibility to challenge Celtic’s dominance once more, that they simply wouldn’t have it quite so easy second time around.

I have little confidence in that regard, all parties have been far too comfortable with the status quo. Including those on our on board. It appears from the outside looking in that a continued rivalry with ‘the’ Rangers is very much part of our ongoing business model. Whatever it takes to sustain that situation is likely to illicit favour from the Celtic board.

And with that it is clear that the Celtic board has become the issue. They appear to be working hand in glove with the governing bodies and also our rivals. It should be remembered in those quarters that the landscape is shifting in Scottish football, there is appetite amongst the support of many clubs in Scotland to see genuine fan representation in the boardrooms. To do that and to influence from within may well allow the voices of those driving Resolution 12 to be heard.

There are many fans groups, all of course with different priorities and agendas and it would need someone who can pull those groups together, should there be the appetite. Someone represent the fans on the board. Could David Low, The Chair of the Celtic Trust and key a financial advisor to Fergus McCann be that man? One who could unite the support behind the one banner and have the business acumen and intellect to thrive in the boardroom environment and be heard.

You could argue that the Celtic board would be likely to rail against the possibility, but when you consider the only other route the requisitioners would have to go down could be incredibly divisive, then perhaps it’s not such an impossible notion.

The SFA’s position shines the light back onto Peter Lawwell and the Celtic board and that board is there to represent shareholders. If shareholders are not happy or indeed suspicious as to how the club have handled the evidence that was presented to them, then the voting down of the previous resolution may not be the end of the matter.

At present the SFA has released a decision without the clarity of an explanation behind it. I’m certain particular shareholders would not be beyond asking Celtic to represent then again and challenge that a transparent explanation is offered. That again could be raised at the AGM. To avoid this and to clear those ever so murky waters, then a representative of the Celtic support on the board may be a suitable compromise.

It seems clear that Celtic have no appetite for further debate around Resolution 12 and rather remarkably some Celtic bloggers can’t even bring themselves to mention Res12 by name. They appeared happy to allow the SFA to kick it all into the long grass. Dirty laundry and public washing comes to mind when it comes to both the SFA and the Celtic board and the compliant bloggers.

The timing of this announcement yesterday and the smokescreen from Celtic at the time of the November AGM seems far too similar an approach to be passed off as a coincidence. Trust in both parties from the Celtic support is likely to be stretched to breaking point on this matter. Having someone to represent the fans may well be the suitable compromise required to end the impasse. Maybe someone like David Low?