You are at:Home»Latest»Celtic Songs – Our Superstar from Portugal gives new Jota song his seal of approval

It seems Jota, our Superstar from Portugal, approves of his new song – one that was given its debut by The Bhoys in section 444 at Celtic Park on Monday night against Hibs, and one as a result I’ve not been able to get out my head all week!

Liam Kelly of this parish covered this earlier in the week and kindly filled in the missing words I’d simply been making up in the meantime. 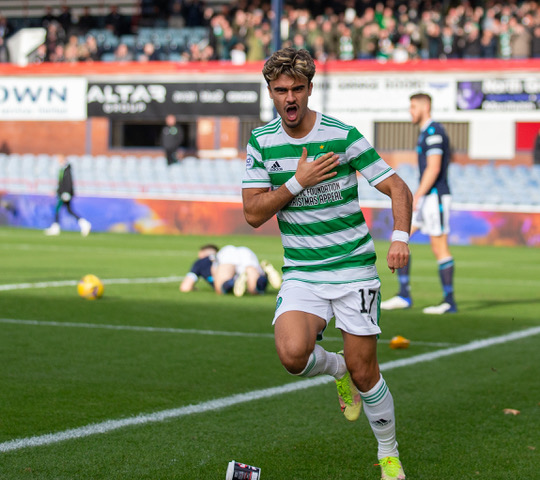 Now Jota speaking to Celtic TV has given it his seal of approval, and unlike me, recognised exactly where the song had come from. And for our winger it brough back memories of years gone by.

“When I was younger I remember I listened to that song a lot of times. Nowadays, the Celtic fans are singing that song for me. It was really good. It reminded me of my childhood.”

🗣️ “When I was younger I remember I listened to that song a lot of times. Nowadays, the Celtic fans are singing that song for me. It was really good. It reminded me of my childhood.”

Jota on his new song in our new #CelticTV interview 🇵🇹🎶

Jota of course made his long-awaited comeback with a substitute appearance against Hibs and he’ll be looking to build up match sharpness over the next few games to ensure he is up to speed for a Glasgow Derby encounter on 2 February.

And if Jota is to become our Superstar from Portugal rather than just a talented player passing through on loan, Celtic will need to activate the option to buy clause on his contract and persuade the player Celtic is the place for him to call home longer term.

Considering he’s only now being appreciated at Benfica, I doubt very much he’s had the benefit of his name being sung from the stands at the Stadium of Light. As such shows of appreciation as produced by The Bhoys on Monday night, may well help him realise Paradise is the perfect place to call home.

📞Celtic have made a £6.5m offer to Benfica for Jota and are awaiting a response. #CelticFC #Benfica https://t.co/mZWH2JeE6Y pic.twitter.com/BGp0zsCT1t