You are at:Home»Latest»Celtic statement issues thinly veiled threat to supporters ahead of planned protest

CELTIC have released a statement tonight asking supporters not to gather at the ground on Sunday, ahead of a proposed protest by The Celtic Trust. The supporters are aggrieved that the club have ignored their concerns and have started raising money towards buying more of a shareholding in the club.

However, the club have thinly veiled the threat of action by saying that they had taken legal advice and that any breaches in social distancing could result in Police action. In a statement on the club website, there was a call from the club that a protest against the board’s running of the club would not be in the best interest of the club ahead of a must win game versus Kilmarnock.

“Following the announcement of a proposed gathering at Celtic Park this Sunday, December 13, ahead of our league game against Kilmarnock, the Club fully understands the concern and frustration amongst supporters following recent results and performances, but clearly, we do not believe staging an event of this kind is in the best interests of supporters, the team or the Club in general, particularly just prior to the match.

“For important clarification, in the present circumstances and given the health risk of gatherings of any kind, the Club has not agreed to any gathering taking place. Celtic Football Club is not involved in the organisation of the proposed gathering.

We are aware that the protest (see graphic) planned for Sunday is contentious. We understand the concerns of many supporters – both health concerns and the impact on the team and we have addressed both in the planning. See guidelines below. pic.twitter.com/4KPvqUqneL

“The Club is also duty-bound to point out that it has received legal and safety advice indicating that, if strict social distancing and applicable Scottish Guidance are not implemented, any such gathering would breach current legislation – something the Club would wish all supporters to be aware of.

“As is always the case, the Club is, of course, happy to engage with supporters and supporter groups to understand and discuss concerns, and the Club encourages supporters to raise their concerns with the Club directly. Indeed, following a recent request, we look forward to meeting The Celtic Trust next week.” 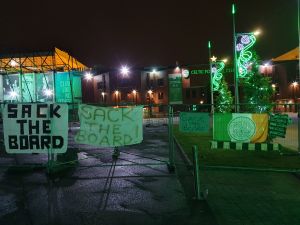 Celtic issued this statement just over an hour before kick-off in the dead rubber match versus Lille. Celtic have already exited three competitions this season and sit thirteen points behind Rangers, hence the frustrations at the way the club is being run.

The club will meet with The Celtic Trust next week, where hopefully the concerns of the supporters will be addressed.

Previous ArticleTeam’s Up – Ajer at right back, Conor Hazard starts in goals vs Lille
Next Article Video: Jullien scores after brilliant delivery from Turnbull