You are at:Home»Latest»Celtic still in talks with Tottenham over Carter-Vickers transfer

Celtic remain in talks with Tottenham Hotspur over the transfer of Cameron Carter-Vickers. The 23-year-old defender is the subject of interest from Newcastle and Ange Postecoglou’s side but has appeared for new boss Nuno Espirito Santo at Spurs. According to US journalist Larry Henry Jnr on Twitter, editor of SBI Soccer, The Magpies and the Celts are still in negotiations for Carter-Vickers, who is believed to be available for £5m.

An update on Cameron Carter-Vickers, per a source close to the player. Both Celtic and Newcastle remain in talks with Tottenham over a deal and Spurs will received a sell-on clause in addition to a transfer fee. #USMNT

Carter-Vickers has continued to feature through preseason under Nuno Espirito Santo and is enjoying his summer there. Newcastle reportedly only has about £15 million to spend this summer on transfers. Celtic has started #UCL qualifying with 1-1 draw vs. Midtjylland. 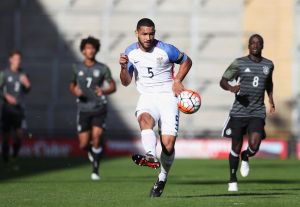 Henry Jr’s source is close to the player and it appears that there is interest in taking him from North London. Carter-Vickers has just one year on his contract remaining and Spurs are likely looking to offload the player to avoid losing him for nothing. Bournemouth had the player last year and will likely fancy their chances in securing the player whilst Newcastle has the draw of Premier League football. Although, the pathway that Celtic offers is unique. Carter-Vickers can play European football, have access to top facilities and really make his mark on football in the UK after a period of time being loaned around the English Championship.

Celtic have sold Kris Ajer for £13.5m with the deal rising up to £18m in add-ons with Carl Starfelt already secured as a replacement in a £4.2m deal. Celtic need to reinforce a couple of key positions whilst buying a new right-back that can feature in the IWB role that Postecoglou envisages for his team.