You are at:Home»Latest»Celtic Still Won: One man’s Armageddon is another man’s Paradise

Friday night in the Kerrydale Suite at Celtic Park was the venue for the launch of Paul Larkins’s new film, ‘Armageddon’. 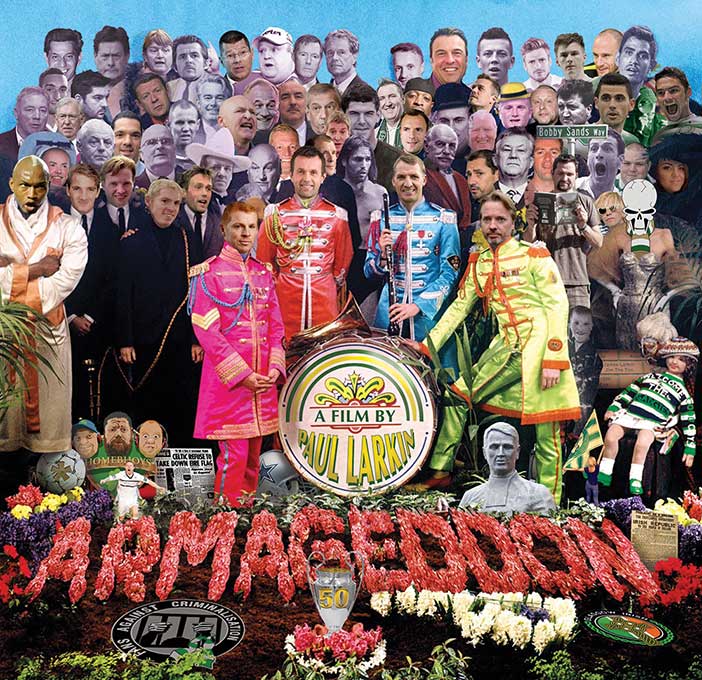 Since Paul Larkin first mooted the idea of making the film, he has received the level of abuse normally only reserved for Irish Catholics who have the audacity to manage Celtic Football Club. Not since the days of Monty Python’s ‘Life of Brian’, has a film been the target of so much vitriol from people who hadn’t seen it. As Larkin pointedly remarked before the inaugural showing… “Naebody’s seen it.”

Larkin didn’t go into too much detail but a couple of quotes directed at him and lifted from social media were predictably vile. It doesn’t take much to imagine the flavour of them so I won’t be repeating them here.

For anyone who doesn’t know Paul Larkin’s back catalogue (and there can’t be too many), he’s the guy who didn’t fancy the view from the back of the bus and has been, for the last few years, in the faces of those deemed responsible for trying to keep himself and his fellow travellers firmly in their hindmost seats.

This is his third film, the first two being ‘The Asterisk Years’ and ‘Anyone But Celtic’. Some of the subjects covered by the previous films, also feature in Armageddon but what seems to have changed is a more structured approach to the telling of the story. And the film is all the more enjoyable for it.

There is a maturity in the work that sees a transition from the emotionally charged, anger and frustration of The Asterisk Years, through to a more measured approach to the insidious machinations of the ‘higher echelons’ of Scottish Football Administration and their aquiescent bedfellows.

Larkin takes a step back and presents condemnation and celebration in equal measure. The anger is still there but the satisfaction that Celtic won through, despite all the obstacles in their way is tangible in his relaxed commentary which is interspersed throughout the film.

There are strongly held views from contributors to the narrative as laid out, so don’t expect the celebratory mood to completely overwhelm the deep-seated resentment that Celtic fans quite rightly feel about the propping up of the ‘institution’ that is housed at Ibrox (in all it’s incarnations). The shameful introduction of the The Offensive Behaviour at Football and Threatening Communications (Scotland) Act 2012 was also put under the spotlight and the film doesn’t miss any targets and hit the wall. An impassioned analysis of the whole debacle is provided by campaigner for the repeal of the Act, Jeanette Findlay.

There aren’t any particularly startling revelations (although some are hinted at) which any close observers of the game in Scotland will not already be aware of but, maybe that isn’t the point this time around. Maybe the point is that the narrative which the mainstream media, for whatever reason, happily tried to stifle, is given a platform which will perhaps take it beyond the limits of the social media bubble that so many other commentators struggle to breach.

As the film reached its conclusion, and its bottom line, it conjured up the same emotion that many felt (I, for one, was greetin’) at that precise moment on 9 May 1998 when the whistle blew to end the possible travesty of what would have been ’10-in-a-row’ for the club that has been variously described as tax-dodging, corrupt and bigoted, Glasgow Rangers FC.

Anger …laughter …tears, are all evident in the Armageddon film. And, guess what? We’re still winning…

Previous ArticleQuestions still need to be asked about the Celtic defence despite a thrilling win in Glasgow Derby
Next Article Celtic celebrations at third goal and the final whistle, 4 must watch videos