You are at:Home»Latest»Celtic target Mat Ryan nears £1m move to Spain, according to report

Mat Ryan is reportedly nearing a £1m move to Real Sociedad with the Australian said to be close to agreeing a two-year deal. According to The Sun, the Celtic target is said to be weighing up a move to The Basque club despite links with a reunion with Ange Postecoglou at Paradise.

Postecoglou made him his No.1 with Australia and they enjoyed success, winning the Asia Cup and qualifying for the Confederations Cup and 2018 World Cup. The pair clearly know each other well and a move for Ryan made sense given Celtic’s goalkeeping woes from last season. Although, now it looks as if the Australian No.1 will be returning to La Liga with Sociedad. 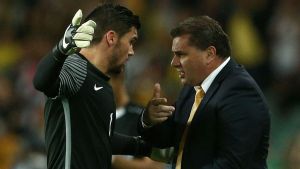 One of Ryan’s Club Brugge teammates, Víctor Vazquezm, has said that the 29-year-old is eager to make the move back to La Liga.

“Maty is super motivated, super happy and eager to fight Alex Remiro for the No.1 keeper position at Sociedad.

“His time in Valencia left him with a very good taste in his mouth, even though he didn’t play as much as he wanted.

“He has always been very attached to Spain, he loves its culture and its food.”

Given the size of the rebuild at Celtic, a move for a goalkeeper wouldn’t have been unreasonable but there are certainly more positions needing immediate attention ahead of the goalies.

Vasilis Barkas is expected to make an effort to prove himself as the club’s first choice but Postecoglou can take no risks after the poor goalkeeping performances from Barkas, Scott Bain and Conor Hazard. Celtic need to improve in a number of positions and the goalkeeping one is certainly one that requires immediate attention. Although, given the fee paid for Barkas, you would expect him to continue as club No.1.

Celtic are pursuing Carl Starfelt and Brandon Soppy as they look to bolster defensive options before looking at improving our depth in our positions.