You are at:Home»Latest»Celtic to confirm Eddie Howe as manager this week, according to report

Celtic are set to finally confirm Eddie Howe as Celtic manager this week, according to The Daily Record. The 43-year-old Englishman has been the main choice of Celtic since Neil Lennon left his post nearly three months ago but contractual issues have held up his announcement.

Due to Brentford beating Bournemouth and ending The Cherries’ season, Celtic are now able to confirm the manager as the club’s next boss. Dominic McKay is hoping that this week will also bring the announcement of the new Director of Football is well. However, the announcement will not be made on Monday but instead can be expected over the course of the week. 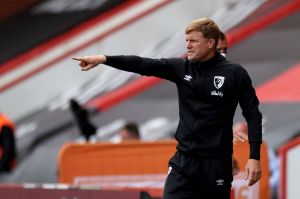 Howe is expected to bring Stephen Purches and Simon Weatherstone with him to the club and there had been some discussion about Celtic fan and Bournemouth Technical Director Richard Hughes with him to Paradise. Another name that has been suggested is Peter Grant, the former Celtic midfielder and recently departed Alloa manager.

Celtic are expected to undertake an enormous overhaul under Dominic McKay. McKay is set to herald in a new era in wake of the end of the 9IAR run and Quadruple Treble successes. Celtic need a big investment on and off the field to make up for the poor year and truthfully a managed decline from Rodgers’ era. It bodes well that Howe and the DOF are being announcement shortly and likely that a sizeable investment is incoming.

It is set to be a major week for Celtic and it is long overdue.