You are at:Home»Latest»Celtic training ground incident then dressing room bust-up

AIDEN McGEADY has opened up about the Celtic dressing room bust-up between himself and Polish goalie Artur Boruc. The argument spiralled out of control as both McGeady and Boruc argued about the validity of a free kick shout.

Speaking to Open Goal’s Keeping the ball on the ground podcast, McGeady says that Boruc overreacted and lead to McGeady getting punched by the goalkeeper in the showers at Lennoxtown.

McGeady called for a foul but when the Polish International told him to play on, the Irish winger responded by telling him to shut up. Something that the 6″4 goalie didn’t take very well as he had to be held back by his teammates.

Needless to say when Boruc said he would get him he meant it and he proceeded to smack McGeady on his return to the dressing room, despite Aiden offering a hand in reconciliation.

“We were arguing about a free kick. Artur was like ‘play on, play on’ and I said ‘mate shut up, it’s a free kick’.

“When I said that, he’s obviously flipped. I was standing and I’ve heard people saying ‘woah woah!’, so I turned around and big Artur was running at me.

🎥⚽️| KEEPING THE BALL ON THE GROUND

“He went to throw a punch but I’ve moved out of the way of it and he did a forward roll after.

“I asked what he was playing at and he said ‘I’ll get you in there’… and to be fair he did get me in there.

“I was sitting reading a paper, it was quiet sly the way he did it because he was standing above me. He offered his hand and said he was sorry about earlier on.

“So I put my hand out and he just went bang and cracked me. It was a good punch because I had an immediate black eye. 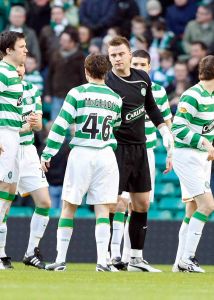 “I tried to get him back. I stood up, obviously raging, I’m not going to batter Artur Boruc, am I?

“He is an absolute streetwise, 6ft 4, Polish bear, do you know what I mean?

“He could actually handle himself as well. I tried to get back at him, everyone is in the middle, and I’m cutting about with this black eye.

“Artur’s like ‘I told you, I told you’ and then walked in the shower, and a few guys are about mixing it like, ‘I wouldn’t be taking that man’.

“So I thought ‘you’re right’. I just went in the shower after him but he spotted me coming and got me again.

“I’m trying to wrestle him. I had my training kit on but he was naked.

“I was trying to get a dig in at him but he was man handling me to the ground. He was ready to boot me but Gaz Caldwell and Louvey grabbed him and wrestled him away.”

McGeady has never spoken about it before but his ex-teammates and Gordon Strachan have discussed it before. Both players were integral parts of the side Strachan built but they appeared to be divisive characters in the dressing room.

It is testament, perhaps, to the relationship of McGeady and Strachan that the ‘keeper was only fined two weeks wages for the incident. McGeady and the manager were often painted as not liking each other but WGS delivered a brilliant quip when McGeady asked why he wouldn’t drop the goalie.

“After that the manager pulled me in and said he would fine Artur two weeks wages.

“I thought ‘right okay, but why not suspend him? Because you suspended me for two weeks after a big argument’.