You are at:Home»Latest»Celtic v Aberdeen: team news, KO time and where to watch

Celtic face Aberdeen tomorrow at Paradise as the Scottish Champions kick off their campaign in front of a sell-out crowd. After Ange Posetcoglou’s side triumphed last season, there will be a brief reflection on the previous campaign as captain Callum McGregor unveils the League Flag before the new season kicks off.

Carl Starfelt and Yosuke Ideguchi will not be involved. The Swedish defender is just returning following completion of rehab from an injury picked up while on International duty. However, Guchi picked up an injury while training. Moritz Jenz picked up a knock during the week but he trained yesterday and should be involved in the squad tomorrow afternoon.

The manager potentially showed his Starting XI in the win over Norwich last weekend. Joe Hart will start in goal. Stephen Welsh is expected to start beside Cameron Carter-Vickers at the back as Starfelt remains on the sidelines. Greg Taylor and Josip Juranovic will start in the full-back areas.

In midfield, you would expect captain Callum McGregor to be joined by Reo Hatate and Matt O’Riley. In attack, the wide areas will likely be occupied by Daizen Maeda and Jota with Kyogo playing through the middle. 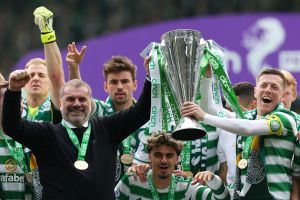 The game kicks off at the odd kick-off time of 16:30 (Celtic Park time). This is due to Sky Sports selecting the fixture to be its prime feature this weekend.

The Champions of Scotland are back and they will be looking to put on a show.

Previous Article“Most enjoyed the ride last year,” Roll Up as the Ange’s Rollercoaster Starts Again
Next Article On This Day: O’Neill era gets off to perfect start thanks to Larsson and Sutton