Celtic’s midweek win over St Mirren may not have been the most inspiring of performances but when you come back from a goal behind to win it can only breed confidence. Considering it was one of back to back away victories after last weekend’s 5-0 over Ross County in Dingwall, it also shows that, though it may be slow, even a little frustrating, Celtic are heading in the right direction – up the table.

Indeed, a victory over Saturday’s opponents Livingston back on home turf, will see Celtic head to the top of the league and pile the pressure on our two nearest challengers in the league race so far – Hibs and ‘the’ Rangers – who meet on Sunday lunchtime. 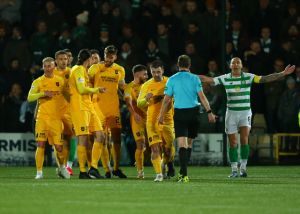 Livingston have been given the tag as a bit of a bogey team to Celtic in recent seasons but most of that can be put down to the horrendous surface at the Tony Macaroni. This weekend Celtic are on home soil and Livingston haven’t quite reached the standards they set last season. 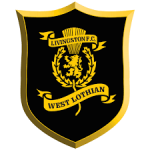 Much of Livingston’s drop off is probably down to the massive turnaround in players manager Gary Holt has had to contend with. 13 players have left Livingston since last season’s top six Premiership finish, their first since 2002.

The most high-profile exit was probably Scotland striker Lyndon Dykes exchanging West Lothian for West London when heading for QPR in the English championship. However, defender Rickie Lamie’s transfer to Motherwell and Steven Lawless move south to Burton Albion will also be losses keenly felt. 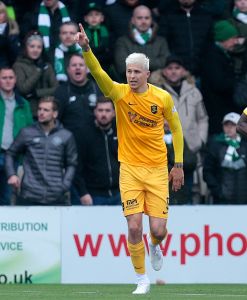 Even when Holt thought he’d snared himself a top striker – with the signing of ex-Celt Anthony Stokes – recruitment came back to bite Holt, as Stokes called time on his Livingston experience without playing for the club citing an inability to adapt to training on a plastic pitch or get to the level of conditioning Holt was looking for.

Holt has however managed to get ten players through the door at Livingston. Jason Holt has signed on from ‘the’ Rangers while intriguingly Alan Forrest has joined up from Ayr United and could face big brother Jamesy in a head to head should they both play on Saturday, with Alan playing on the left-wing and James Forrest possibly patrolling Celtic’s right.

Robby McCrorie has joined on loan from ‘the’ Rangers and Ciaran Brown has returned on loan from Cardiff City alongside Julien Serrano from Monaco. Defender Jack Fitzwater has headed north from West Bromwich Albion, while more low-key additions have seen forward Matej Poplatnik, siging from Kerala Blasters, Salim Kouider-Aissa, from Queen’s Park, goalkeeper Max Stryjek, from Eastleigh and striker Lars Lokotsch from German side SV Rodinghausen. 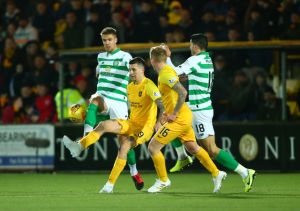 Considering all the changes Holt has had to contend with it’s not a surprise the season has started slowly for Livingston and it may be too soon to write them off just yet.

The Lions started the season with a couple of stinging losses. First to St Mirren, losing to a Richard Tait header and they followed up with a 4-1 defeat on home ‘turf’ to Hibernian. They looked to have recovered with a good 2-2 draw at Fir Park against Motherwell with goals from Dykes and Forrest, however given the ‘Well’s form this season even that result isn’t looking to inspiring with the benefit of hindsight.

Livi looked back on track with a credible 0-0 draw at home to ‘the’ Rangers and it was a game they could easily have won. Next up was a trip to Pittodrie to face Aberdeen and Holt’s men out up a decent enough performance before losing 2-1.

Both games seemed to inspire a little confidence as the following match saw Livingston record their first win of the season winning 1-0 at home to Ross County by way of a Jon Guthrie goal. Yet even in that match it took the sending off of County’s Tremarco before Livi could get their noses in front.

Then just in case there was hope of a revival, Livi followed up their win by going down last week 2-1 at home to Hamilton. Having taken the lead in the opening minute they succumbed to a late minute winner from Kyle Munro.

It’s safe to say that Livingston’s form will be of concern to all at the Tony Macaroni, the loss of both Dykes and now Stokes won’t be helping their glaring inability to put the ball in the net on a regular basis and a visit to Celtic Park is likely to be a tie their confidence sapped players won’t be looking forward to.

In the seven games Livingston have played this season they’ve already used four different formations as Holt looks for the formulae that will replicate last season’s success. In the opening day defeat to St Mirren they used a 3-4-2-1 formation and the following week reverted to a 4-2-3-1, one that Holt has favoured on three occasions, employing it in the 2-2 draw with Motherwell and again in their only win of the season against Ross County.

The manager has also utilised a flat 4-5-1 formation in the 0-0 home draw with ‘the’ Rangers, a 4-4-1-1 against Aberdeen at Pittodrie before adapting things again for last weekend’s defeat to Hamilton by employing a 4-1-4-1 set-up.

It’s a sure fire sign the manager hasn’t quite found the right balance so far and it may be that Neil Lennon’s coaching staff will be unsure what sort of formation Holt will employ at Celtic Park but I’m fairly certain their 4-5-1 shape adopted against ‘the’ Rangers may get another airing.

When goals are hard to come by and you’re heading to the home of the champions, getting as many men as possible behind the ball will be the order of the day. That particular formation will allow Livi to park the bus and that’s what they’ll do. It’ll be down to Celtic to find the gaps or get to the by-line and get Livi turned.

If it happens, the Forrest brothers head to head will be the one to watch, but it will take a lot of things to fall into place to see the siblings match up directly. It will be an intriguing side-show if it does and despite lacking his Brother’s pace Alan Forrest had a fine scoring record with Ayr United and has certainly earned his opportunity in the top flight.

If the sibling rivalry doesn’t materialise Livi’s Scott Pittman is the midfielder capable of springing Livingston from defence and attempting to link with Liv’s sole striker – likely to be Lars Lokotsch. Pittman is comfortable in central midfield alongside ex ‘Rangers’ man Holt but he’s also played as a number 10 and as a second striker this season. He’ll be the man expected to reduce the yards from the deep lying midfield and get the support and ammunition to the isolated striker.

Now he could be brilliant or his curly toe could be in operation this Saturday. We all know what Efe Ambrose is capable of when it comes to defending, he can shift seamlessly between the sublime and ridiculous.

With Celtic now adopting a two-striker approach it will be interesting to see if Odsonne Edouard can pull Efe out of position and create the space that Albian Ajeti can exploit. There’s no doubt Lennon will be asking for a high tempo and a lot of movement from his front two to encourage Ambrose in particular to stray out of position.

Celtic simply have to win this Saturday. From what looked like it could have become a 11-point deficit to overcome, Celtic can win and go top of the Scottish Premiership with Hibs and ‘Rangers’ not due to meet until Sunday. It will be an opportunity to put the pressure onto our nearest rivals and historically they tend to feel the heat.

Given Livingston’s form and lack of goals in the team there can be no excuses for not taking all three points on Saturday. Livingston will sit deep and frustrate, but considering St Mirren adopted that approach even when being a goal down at home on Wednesday night this is something Celtic are very much getting used to.

This time however we have the advantage of a large playing surface and if we can get the ball to the by-line and cut it back our width could be the big advantage on Saturday. With Ajeti likely to return to the starting line-up we have exactly the poacher’s instinct in the team to take advantage of any half chances.

I think Lennon will revert to the side that defeated Ross County 5-0 last weekend. It’s clear Celtic need to settle on their defence and goalkeeper for the next few weeks. We were given a warning shot with the disorganisation in defending St Mirren’s opener on Wednesday. I’m certain Lennon will have noticed that too.

With Shane Duffy added to the team it’s now time to give a settled back three alongside Ajer and Jullien time to learn their new roles. Whilst at the other end of the pitch Edouard and Ajeti also need to get used to each other’s movements. There is room for fluidity in the middle of the park and we have enough options in there to keep the opposition guessing, but up front and in defence we need to be giving these players a run of games.

Celtic I think will stroll this on Saturday. I’m expecting a good performance and a few goals. 4-0 Celtic with Ajeti taking home the match ball.

Previous Article“Boisterousness” – Did Bhoys Behave Badly at Brentford Away, 2013? Airbrush or Warts and All coverage?
Next Article Neil Lennon makes Celtic addition as he seeks ‘another edge’