You are at:Home»Latest»Celtic v Livingston – team news, kick off time and where to watch

Celtic host Livingston today at Paradise in the first game after the split. David Martindale’s side sit in 5th whilst Celtic are in second having already relinquished the league title. The game will hopefully act as an opportunity for Celtic to continue on from a comprehensive win over Falkirk last weekend. However, interim boss John Kennedy will have one eye on the following weekend as Celtic travel to Ibrox to face Rangers in the Fourth Round of The Scottish Cup.

Although the game against Livingston is the immediate focus with three points to play for.

Where to Watch: The game will only be accessible via the Pass to Paradise, which hopefully we will see the back of at the end of this season.

Celtic won the first encounter against Livingston at the start of the season; however, the last two games have resulted in stalemates with 0-0 and 2-2. This will be the third game between the sides at Celtic Park this season as the split fixtures have meant that the games are spread in such a way due to ‘fairness’. 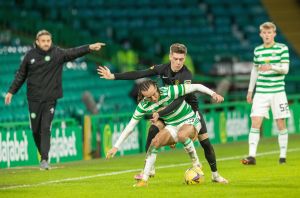 Team News: There are no fresh injury concerns to worry about with long term injuries keeping Christopher Jullien and Mikey Johnston sidelined. Kennedy will likely look to manage his pack by bringing Odsonne Edouard back into the starting XI with Ibrox the following week in mind.

Celtic will likely see McGregor and Elyounoussi reintroduced to the Starting XI as the team look to go into the following weekend ahead of the Scottish Cup match.