You are at:Home»Latest»Celtic v Motherwell: predicted XI as Rogic set for farewell

Celtic face Motherwell this afternoon in the final game of the Cinch Premiership season. The Scottish Champions will receive their trophy at the conclusion of the match but the manager will be keen to put on a show for the packed Paradise crowd.

In goals, Joe Hart will start. The Englishman, who won two Premier League titles with Manchester City, was loving the celebrations at full-time in Dundee during the week and he will be buzzing to get his hands on the trophy.

In defence, the central pairing of Cameron Carter-Vickers and Carl Starfelt will continue. The pair have been rock solid this season and, despite Christopher Jullien’s comments about wanting game time, they will start the game as Ange looks to finish the season in style. Josip Juranovic is fit but you would expect Tony Ralston to continue. Greg Taylor, who has been excellent this season, will likely start at left back.

In midfield, Callum McGregor will start at the base of midfield. The Celtic skipper will be eager to get his hands on the Premiership trophy but will want to finish the campaign in style. He will likely be joined by Reo Hatate and Tom Rogic. Hatate was rested on Wednesday but came on. Rogic, meanwhile, is set to bid an emotional farewell to Paradise. The 29-year-old was confirmed to be leaving alongside Nir Bitton. Both excellent servants will be honoured at Paradise today. 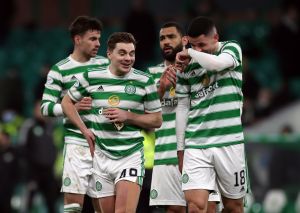 In attack, Ange has the usual headache of who to start but you would expect that Maeda would come into the side along with Jota to start on either wings. However, the question remains who he will play through the middle – you would expect Kyogo to be given the nod.

The club will pay tribute to Bitton and Rogic as the support toast The Champions of Scotland. Ange’s side have done extremely well to win a Double in this season of rebuilding. The Celtic manager arrived with a mountain to climb and he did so with a dry sense of humour and a one-track mind.