WITH Celtic winning 9IAR last week, supporters were are now able to take stock of the last nine years from a personal point of view as well as from a footballing perspective. Celtic became Champions of Scotland after a blistering win at Rugby Park back in 2012 and since then, no team has been near the Premiership trophy that has been kept safely in the Celtic trophy room.

This series looks at a few forgotten names in the 9IAR winning teams and how their career transpired following their time with Celtic.

The veteran midfielder joined Celtic at the close of the 2018 summer window after leaving Kilmarnock. He had been a revelation for Steve Clarke’s Killie, scoring in a win over Celtic at Rugby Park earlier in the year.

Mulumbu was a free agent at the time of signing for Celtic and at the time was seen as the alternative to John McGinn who opted for Aston Villa rather than his boyhood heroes, Celtic. The signing was underwhelming and looked as if Celtic had run out of options on what was a miserable transfer window for the club – aside from signing Odsonne Edouard.

The 31-year-old made his debut at Rugby Park as Celtic fell to a late winner from Stuart Findlay. Mulumbu and Aaron Tshibola were embroiled in a number of tussles as the midfielder lost his head at times in the fixture as he felt the backlash from the home support. 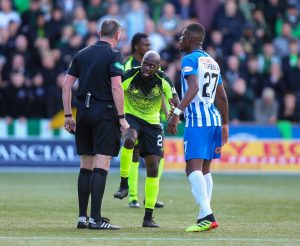 Mulumbu’s involvement in the Europa League versus Salzburg proved that Mulumbu wasn’t going to be a starter at the club. Ryan Christie’s emergence as well as Celtic’s wobbly form in the league limited Mulumbu’s appearances and come the turn of the year, he was loaned to Killie again.

Despite his small contribution, Mulumbu played his part in Celtic’s 8th title in a row making just three appearances before being released by new manager, Neil Lennon.