You are at:Home»Latest»Celtic’s Afolabi set to face Kilmarnock for place in Premiership

Celtic youngster Jonathan Afolabi will contest with Kilmarnock for a place in the SPFL Premiership in the play-off as Dundee look to seal promotion. The Irish U21 has been a part of James McPake’s side as they have clawed their way back towards the top flight.

Afolabi has made 22 appearances this season, scoring 4 goals across all competitions. It is not an astonishing return but the player has been working on his build up play, holding the ball up and bringing teammates into the game. However, the signing of Jason Cummings has curtailed the opportunities for the big striker. 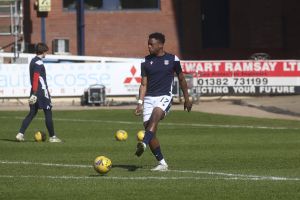 Following Ross County’s heroic comeback at Fir Park today, Kilmarnock have found themselves in the play-off place despite their win over condemned Hamilton Accies.

The games will be played on the 20th and 24th of May with the winner earning their place in the top flight. It could be a boost for the league if two teams with artificial surfaces are relegated and two clubs with lovely grass pitches are promoted. Tommy Wright will likely be watching on and thinking what could’ve been as his successor, Callum Davidson, is 90 minutes away from winning a double with St Johnstone.