You are at:Home»Latest»Celtic’s Bayo a target for FC Sochaux, according to report

Vakoun Issouf Bayo has been listed as a target for Ligue 2 side FC Sochaux. The Celtic attacker is on a season long loan in France but is expected to make the permanent move away from Parkhead in the summer. The 24-year-old bagged an assist as Toulouse fell to a 2-1 play-off first leg defeat to Nantes but couldn’t prevent the Ligue 1 side taking the advantage into the second leg. As reported by L’Est Republicain, the Ivorian attacker is on the shortlist for the Montbéliard based club.

The report claims that Toulouse have an option to buy on the striker but should they decide against signing him, Celtic will be able to sell on the attacker that they paid around £2m for. (BBC) 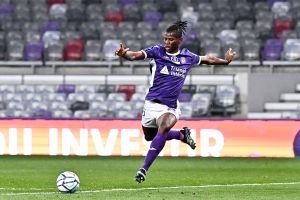 Injuries hampered his progress in Glasgow with the 24-year-old missing preseason before returning to fitness in time to sign for the Ligue 2 side. The player was clearly not a Brendan Rodgers signing, which meant that he wasn’t integrated into the first team when he arrived. Injuries and a lack of match fitness meant that Neil Lennon didn’t have a chance to fully utilise him; however, Lennon appeared to give him a chance but Bayo didn’t appear a better option than Griffiths or Edouard.

A new manager (hopefully Eddie Howe) will likely see Bayo as surplus to requirements and may have his own ideas for targets already. But, there remains an outside chance that the Englishman may see Bayo returning as a chance to assess him before making a decision on his future.