You are at:Home»Latest»Celtic’s Complicated Relationship With Hibernian – (Part 3)

Having covered the role of Hibernian in Celtic’s foundation (Part 1), and explored the differences between the clubs in the earliest days (Part 2), this article looks at the demise of the original Hibernian and allegations that Celtic were to blame.

The most commonly heard accusation is that Celtic put the original Hibernian out of business by stealing a number of their best players. Such a claim often goes unchallenged, yet there a number of facts, aspects and hypocrisies that are ignored when broaching the subject.

The first thing to note is that it was not possible to steal a player at the time. Players weren’t employees, there were no contracts, and individuals could play for multiple teams in any given season if they desired. There wasn’t even any official competitions set up, apart from the Scottish Cup, and the majority of matches were friendlies.

The next fact to consider is that five of the six players who played for Celtic after previously being regulars at Hibernian were from Glasgow. They returned to the West of Scotland, no doubt with financial inducements from Celtic. Such underhand payments were illegal, but this practise of ‘shamateurism’ was not invented by Celtic, nor was it a new thing in 1888. Indeed, Hibs were charged with professionalism in 1887 and escaped punishment on a casting vote. In fact, every club outside of Queen’s Park were largely guilty of such conduct.

It is an often forgotten fact that Hibs “stole” six players from Ayrshire club Lugar Boswell during their victorious 1887 Scottish Cup run. Hibernian then replaced the Celtic departees with players from Carfin Shamrock and Whifflet Shamrock – committing the same crime against clubs that Celtic are prosecuted for.

It should be understood that clubs such as Carfin Shamrock were situated in small mining villages. It would not have been financially viable for a football team to operate successfully in that environment in the long run. Therefore, many players understandably moved elsewhere. On a larger scale, this was replicated when the six players swapped the club of the Edinburgh Irish (Hibs) for a more prosperous future at an Irish club with a far bigger community from which to draw support in Glasgow (Celtic). Although, I would contend that Celtic should have steered clear of Hibernian regulars, out of respect for the great role that the Hibees played in our foundation.

Moving away from the accusations of stealing players and shamateurism, another matter for consideration is that Celtic made two large donations to Hibernian in the Glasgow club’s first season. Not only is this potentially indicative of Hibs being in financial troubles at the time (another reason why players may have jumped ship), but it also suggests that Celtic were not to blame for Hibs disbanding. 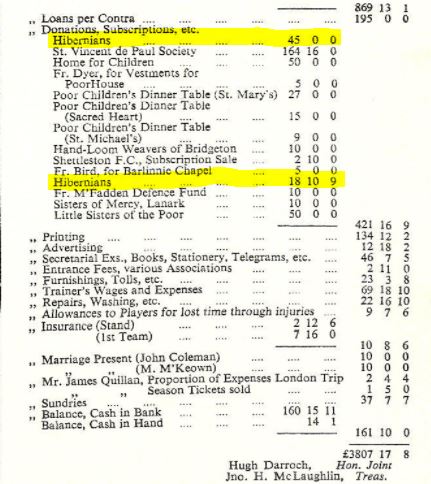 In terms of the downfall of Hibernian, the key reason for them going bankrupt was that the club Secretary John McFadden absconded abroad with the club’s funds. Furthermore, a disagreement over Irish politics (covered in Part 2) left them with few committee members as conflict between the Church and those in favour of Irish Home Rule caused a split.

Hibernian were resurrected in 1892 and they had a Celtic man to thank in part for that. Thomas Flood, a Celtic member from Dublin, had moved from Coatbridge to Edinburgh by that stage, where he worked as a journalist for the Catholic Herald. While in the capital, Flood helped to resurrect Michael Whelehan and Canon Hannan’s (who passed away in 1891) club. He later returned to Coatbridge, but the role that he and others played had ensured that there was a new Hibernian for the Edinburgh Irish to follow.

To evidence this, Brendan Sweeney’s fantastic Celtic: The Battle For The Club’s Soul books referenced that, at the end of the 1893/94 season, the Scottish Second Division committee held a meeting. During proceedings, the Chairman congratulated Hibernian on winning the title and singled out Thomas Flood for the pivotal part he played in the club’s rebirth.

Sweeney notes the following from the Scottish Sport newspaper at the time: “The Chairman said that the championship had been secured by the Hibernian, and he thought it only right that he should congratulate the club on their splendid performances during the season. He would not think it proper if he did not take that opportunity of saying that he thought a good deal of the success of the Hibs was due to the indefatigable energy of Mr Thomas Flood, the Match Secretary. He hoed there would be no question of Hibernian securing a place in the First Divsion. Mr Flood, who was warmly cheered, said he begged to thank them heartily for their kind expressions. It had always been a pleasure to meet with the gentlemen who represented the clubs in the Second Division, and he could assure them that he was not surprised that they should show their goodwill by congratulating his club on their success.”

Thomas Flood, the @CelticFC member from Dublin who settled in Coatbridge, before work took him to Edinburgh for a few years where he helped resurrect @HibernianFC in 1892, before returning to Coatbridge. pic.twitter.com/HA9C9YHMjC

In Part 4, which is published tomorrow morning, we look at two occasions when each club did the other a disservice.

*For the Hibs fans who have commented about the proprietorship of public houses, which John Glass and the Celtic committee were known to entice players with at times; my use of the term ‘financial inducements’ in Part 3 was intended to cover all forms of enticement from monetary offerings to ownership of pubs. To be more specific, this practise of gifting pub ownership did happen for certain star players. If memory serves me correct, this was the case for the likes of James Kelly and Dan Doyle among others.

In regard to the six Hibs players who joined Celtic, Willie Groves was set up with a public house by the club after he had signed and he is listed as applying for license of that premises (29 Taylor St, Townhead) in August 1890. However, Groves would depart for the wages offered by West Bromwich Albion, in England’s professional league, two months later! Michael Dunbar owned multiple pubs, but his licenses appear to have been secured in 1913 when he was a Celtic Director rather than during his playing days. The others – Tom Maley, Johnny Coleman, Michael McKeown, James McLaren – did not own pubs to my knowledge.