You are at:Home»Latest»Celtic’s Dramatic Treble of 19 November Clashes with Rangers

On This Day, 19 November, we have had a history of matches playing against Rangers. A rather remarkable piece of trivia if you think about it. Three matches against our closest rival all on the same day, at different times throughout the years. The three are comprised of two draws and one victory.

The draws occur with firstly a cracking 3-3 draw at Ibrox during the 1995/96 season, then we fast forward two years to a very famous season in 1997/98, one in which we were aiming to stop the original Ibrox club from winning ten championships in a row. That game ended 1-1 at Parkhead. Then finally, a relatively more modern clash back in 2005 at Celtic Park. Celtic ran out 3-0 winners in that particular fixture on 19 November. 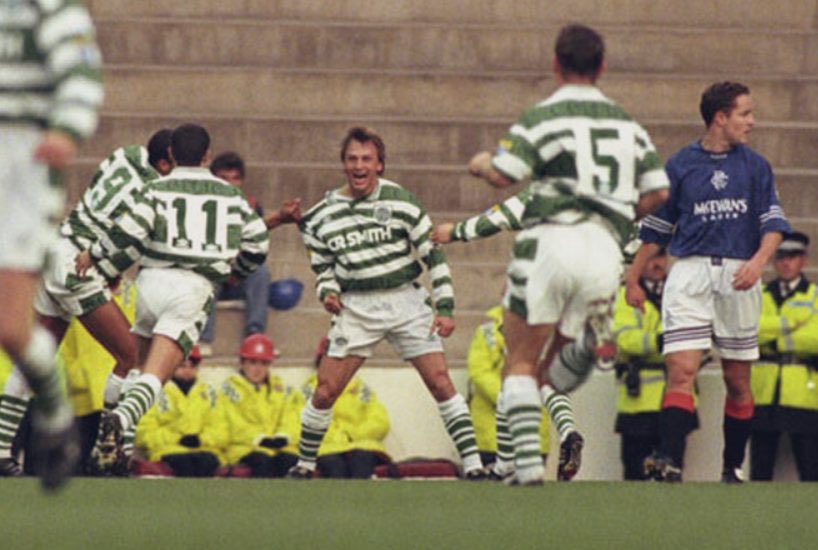 First up, a scintillating 3-3 draw at Ibrox when Tommy Burns was manager of the football club. Celtic were still emerging from their barren spell and beginning to get a foothold on things under the Celtic legend. Andy Thom would open the scoring with a howitzer of goal from outside the box that left Andy Goram with no chance. After being pegged back to 1-1, Collins would put the Hoops ahead again from the penalty spot – easily dispatching in the ‘keepers left hand side. 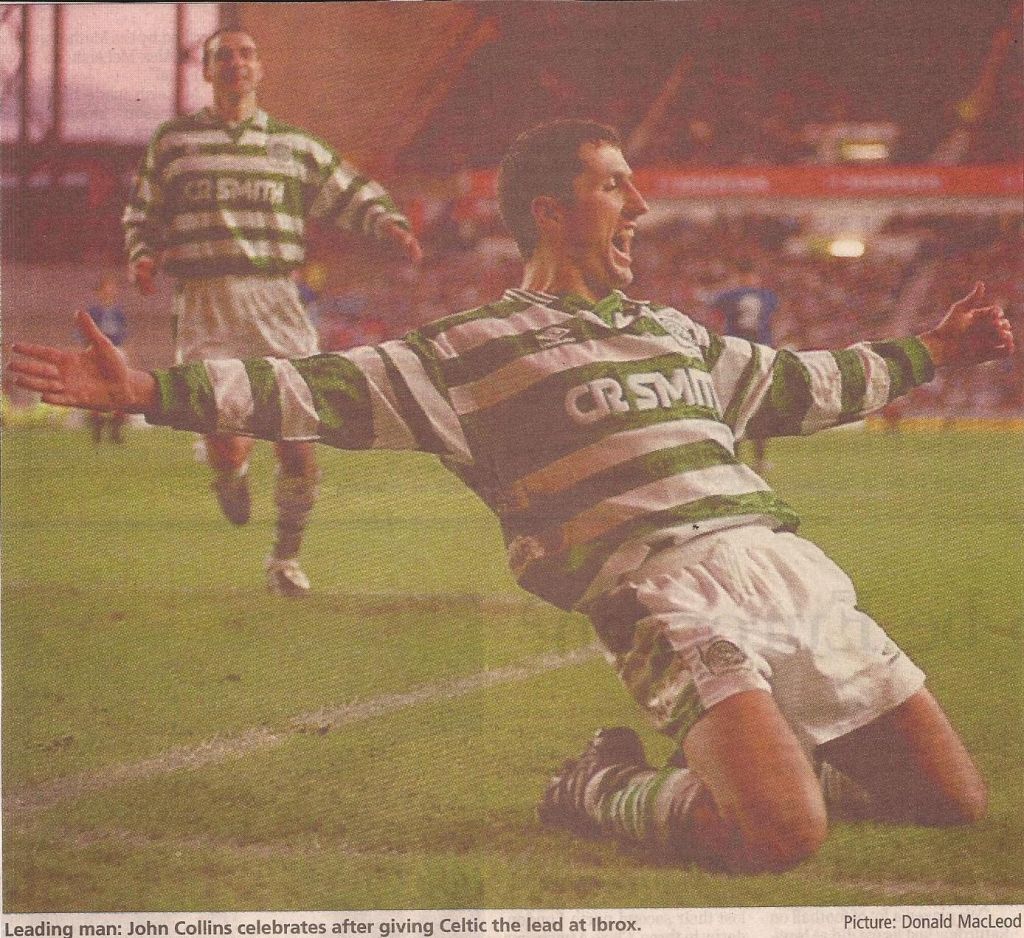 Despite taking the lead again Burns’ side would come undone with an equalizing goal and then an unfortune own goal in a bizarre mix-up at the back. Then, Tosh McKinlay would redeem himself for his part in the own goal which put Rangers ahead, by whipping in a delightful cross for big Pierre to glance in at the far post past the stranded Goram. Celtic even had the chance to win it with McKinlay finding van Hooijdonk yet again with an excellent crossed ball, only for the Rangers goalkeeper to save his scissor kick from inside the penalty area. What a game it was!

Next up, a crucial game in a crucial season for Celtic Football Club as they tried to stop Rangers from taking the history books ten championship titles in a row. This one would be at Celtic Park and would see a late injury time goal from Alan Stubbs keep Celtic’s title ambitions still breathing during what would turn out to be a monumentous season for all those involved at Paradise. Stubbs rose to meet a Jackie McNamara ball which he directed right into the bottom corner of the Rangers goal. A vital smash and grab when we needed it most. 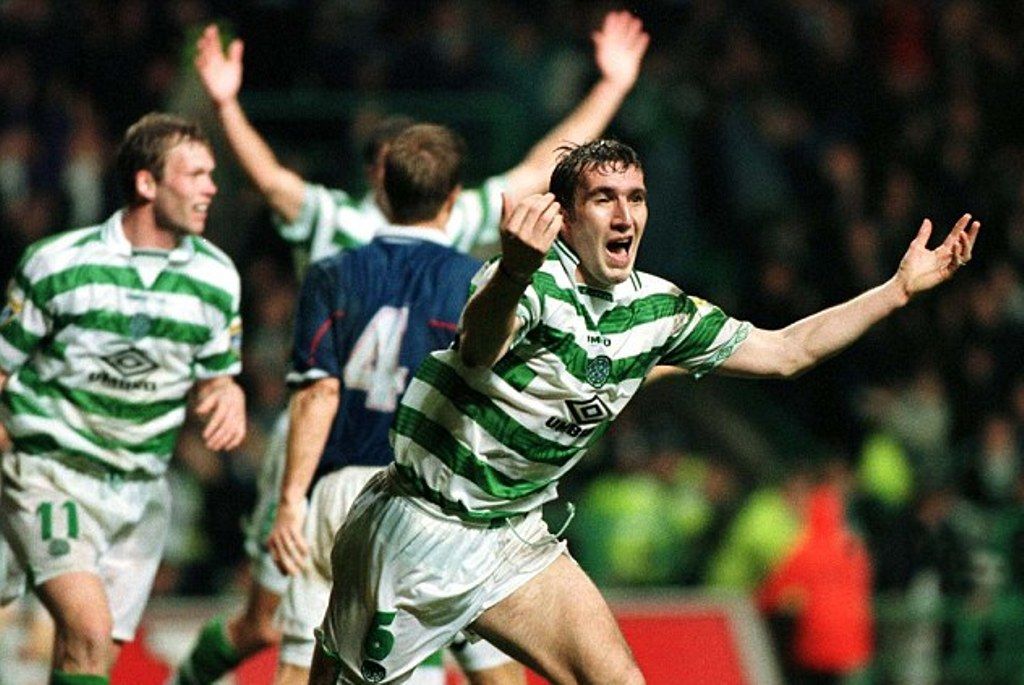 Alan Stubbs equalises in the final seconds of injury-time. @alanstubbs_6

One of, if not the most vital goal in winning the title that season. pic.twitter.com/Md25JmCuWO

The final game of the three comes against Rangers at Parkhead in 2005 as Conall McGinty has already covered today. Gordon Strachan was just appointed as Celtic manager that summer. On this occasion, he would demolish Alex McLeish’s side 3-0. John Hartson would open the scoring after Shaun Maloney shimmied his way into the Rangers box to fire across a low ball to meet the big Welshman, who made no mistake from just a few yards out. 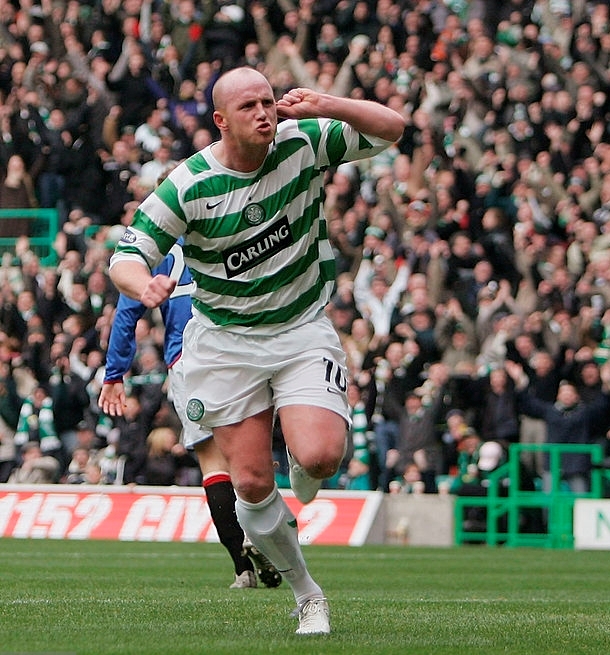 The second came from an excellent cross from summer recruit Shunsuke Nakamura, whose cross found Bobo Balde to make it two with the head. Then, youngster Aiden McGeady would make it three, after Stan Petrov drilled the ball into the Rangers box, with McGeady volleying it in low past the goalkeeper.