You are at:Home»Latest»Celtic’s Historic Connection To Kenilworth Hotel

Earlier this week, we wrote an article about the flat that Celtic FC owned on Roebank Street in Dennistoun. Many great players stayed at the property as they settled into Glasgow life and adjusted to becoming a Celtic player. In response to this piece, which mentioned the Kenilworth Hotel, some readers requested that we cover that story too… your wish is now my command.

Sadly, the Kenilworth Hotel, which once stood at 5 Queen Street, has now gone and the building is a Next shop.

The Kenilworth Hotel was used by Celtic in the post-war years to house new signings, who hadn’t bought their own accommodation. Jock Weir, who famously scored a hat trick to save Celtic from relegation on the final day of the 1947/48 season at Dundee, stayed there with all expenses paid for 18 months after signing from Blackburn. Weir’s teammate, Charlie Tully, once revealed that players would often have meals in the restaurant and then put the bill on Weir’s tab – unbeknown to him or the club!

The hotel also has a special place in Celtic’s history linking to Glen Daly’s Celtic Song, recorded at Pye Record’s Marble Arch Studios in London, in August 1961. On his visit to record the immutable track, Daly had an hour to kill and reportedly went for a roast dinner in The Strand restaurant, which was among the most reputable in the city. Upon devouring the meal, the artist is said to have pondered over the second verse of The Celtic Song, which he felt was inadequate. It was at the restaurant table that a desperate Daly became inspired, when he recalled the voice of Belfast Celtic fanatic, Charlie Tully, who had sung the Antrim club’s classic song at a party in the Kenilworth Hotel one evening. The lyrics that Glen Daly remembered hearing Tully slur were part of a short ditty that had been a favourite of Belfast Celtic’s support for years: “We don’t care if the money’s right or wrong. Darn the hare we care because we only know that there’s going to be a show and the Belfast Celtic will be there.” The words were a perfect fit, and, with a slight adjustment, Glen Daly’s anthem was complete. The song was released on a 45rpm single record in October 1961. 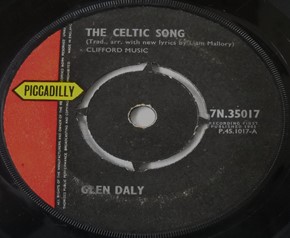