You are at:Home»Latest»Celtic’s potential Qualifying Round 1 opponents in the 2020/21 Champions League: FC Ararat-Armenia

Ahead of the draw for the first qualifying round of the 2020/21 Champions League, which takes place in Nyon a week on Sunday, 9 August, I’m reviewing the 17 potential opponents lined up for Celtic. With all but one of the possible options now known, we’ve already covered Floriana, FK Sileks, KF Tirana, KR Reykjavik and Kuopion Palloseura. 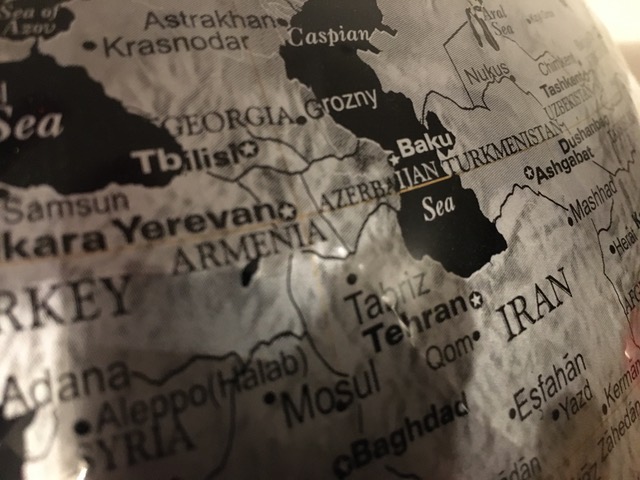 FC Ararat-Armenia will represent their country in the 2020/21 Champions League. Just like previous options KR and KuPS, they have a UEFA co-efficient of 2.5, compared to Celtic’s 34.

Just three years old, having been founded in 2017 as FC Avan Academy in Yerevan, Armenia’s capital city, I suspect they may be the youngest club in the competition. Having also been known as FC Ararat Moscow, the club adopted their current name upon their promotion to the Armenian Premier League in 2018. 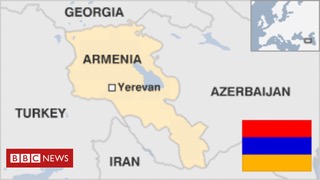 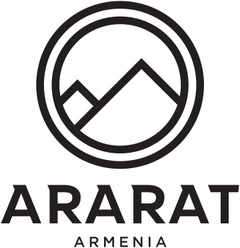 Home colours for Ararat-Armenia are white and blue shirts with blue shorts and white socks. The away kit has red shirts and socks with black shorts.

The club’s home ground is the Yerevan Football Academy Stadium, which is located in the Avan district in the north of the capital. Opened in 2013, it seats around 1,500 spectators. Many major games in Armenia are played at the Vazgen Sargsyan Republican Stadium in Yerevan, which holds 14,500 supporters, and which is named after the Prime Minister of the country who was assassinated in October 1999.

Ararat-Armenia retained the 10-team Armenian Premier League by four points from Noah, with Alashkert a further point behind in third spot. The top two teams met in the final match of the season just two weeks ago, with Ararat-Armenia winning 2-0 at home to clinch the title.

This will be short and sweet, given the brief history involved. In their first season, 2017/18, Ararat-Armenia finished third in the Armenian First League, gaining promotion to the Premier League, which they have won in both of the last two campaigns.

Last season was the first European campaign for Ararat-Armenia, however, they have already won an impressive five of their inaugural eight matches, progressing in two of their four ties.

They began in the first qualifying round of the Champions League, beating AIK Solna 2-1 at the Yerevan Football Academy Stadium, before losing the second leg 3-1 in Sweden. Dropping into the Europa League, Ararat-Armenia recorded home and away wins over our old friends, Lincoln Red Imps of Gibraltar, qualifying on a 4-1 aggregate.

In the third qualifying round, two late goals from Georgians Saburtalo Tbilisi saw the Armenians lose the home first leg 2-1, and it took a tremendous performance in the return to turn that around with a 2-0 victory. The European debutant’s great run finally ended in the most heart-breaking of circumstances, the penalty shootout.

A 2-1 victory in the Republican Stadium over FC Dudelange set things up for a tense return in Luxembourg the following week, however, things looked good when Mailson Lima put the Armenians ahead on the night midway through the first half. Dudelange levelled the tie with two second-half goals and with extra-time failing to produce a winner, the clubs faced the dreaded shootout. Tied at 4-4 after 10 attempts, Pashov missed Ararat’s first sudden-death kick to send them out. As an aside, on the same night, Celtic beat AIK 4-1 in Solna’s Friends Arena, venue of Ararat’s Champions League exit, the previous month.

Celtic and Ararat-Armenia have never met in European competition. 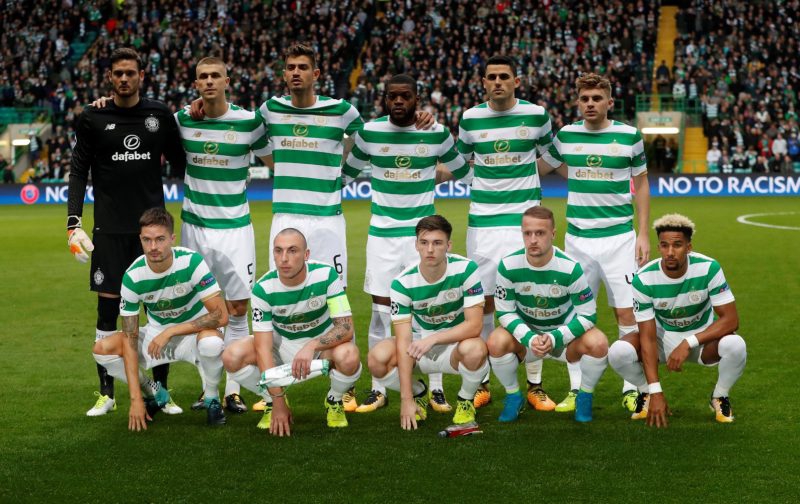 The only Armenian club Celtic has played is FC Alashkert, which occurred in the first qualifying round of the 2018/19 Champions League. The teams met at the Vazgen Sargsyan Republican Stadium on Tuesday, 10 July 2018, an Odsonne Edouard strike in first-half stoppage time setting Celts up for a first-leg victory sealed by late James Forrest and Callum McGregor goals. Eight nights later, an early Moussa Dembele double was followed by another Forrest score as Celts repeated the scoreline from Yerevan, to progress on a 6-0 aggregate to face Rosenborg. 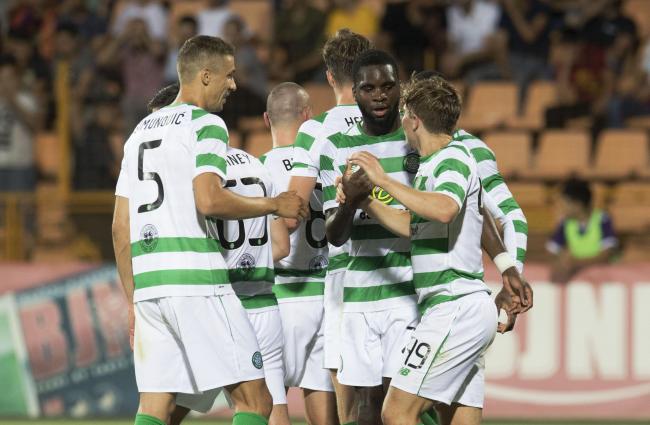 Born to an Armenian mother, Djorkaeff was a key member of that excellent Paris St Germain team faced by Tommy Burns’ Celtic in the second round of the European Cup Winners’ Cup in October 1995. The team for the first leg in the Parc des Princes featured one-time Rangers manager Paul Le Guen in midfield besides Djorkaeff, whilst future Celt Stephane Mahe was at left-back.

The latter two would combine for the only goal of the game, scored with 15 minutes remaining, Mahe’s cutback dispatched past Gordon Marshall by Djorkaeff to give the French a narrow first-leg advantage. Early in the game, Pierre van Hooijdonk had passed up a glorious chance of a vital away goal by heading past the post when it looked easier to score, whilst the French had struck woodwork twice. 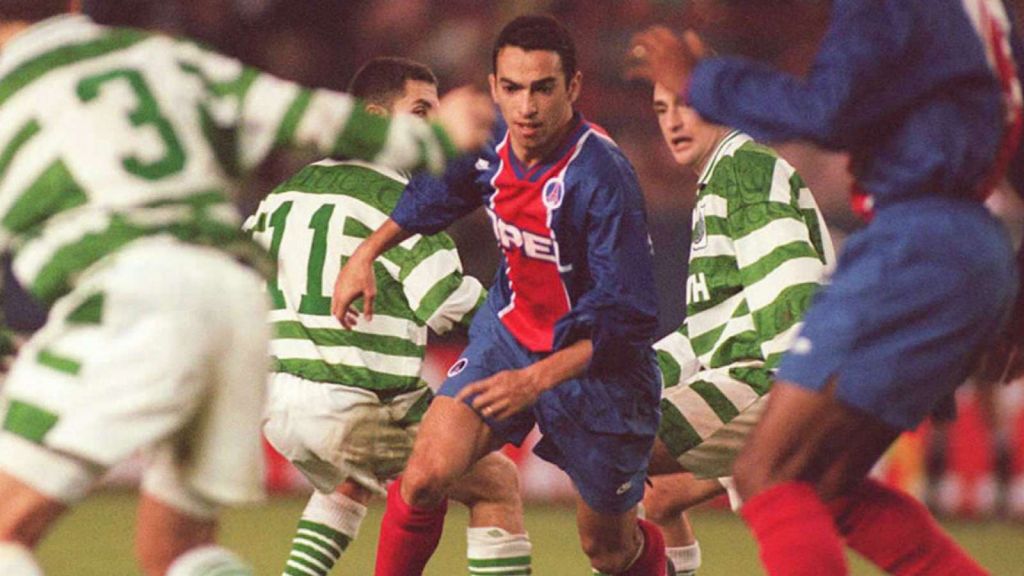 That was my first sighting of Djorkaeff, who would go on to enjoy a marvellous career, winning the UEFA Cup with Inter Milan in 1998 just before lifting the World Cup in the Stade de France, following the hosts 3-0 victory over Brazil. He would claim a European Championship with France two years later in Rotterdam, after their 2-1 extra-time defeat of Italy.

Before that, there was the small matter of the 1995/96 European Cup Winners’ Cup. Despite the quality of the opposition, I still fancied Celts to turn the tie around in Glasgow two weeks later, in what was the first big occasion at the newly redeveloped Parkhead arena.

Just under 35,000 packed into the two completed stands, creating a cauldron of noise, and they watched their team compete well until a dreadful blunder by goalkeeper Marshall 10 minutes from the interval, his fumble from Lauren Fournier’s weak effort at goal allowing PSG ‘Bad Boy’ Patrice Loko to fire his team ahead. 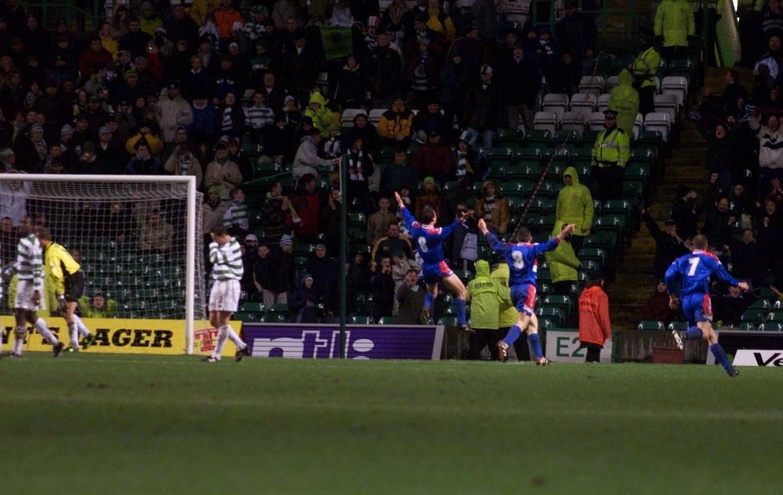 And within seven minutes, Loko struck again with a neat near-post finish, after Djorkaeff had provided the cross. Perched high up in the north-east corner of the stadium, I had a bird’s-eye view of the third PSG goal, midway through the second half, as Djorkaeff showed sublime skill to take a pass on the run with the outside of his boot then leave John Hughes for dead, before setting up a tap-in for substitute Pascal Nouma. This would be Celtic’s worst home defeat in Europe to date, however, rather than a storm of booing, the Parkhead crowd rose as one to acclaim the attacking quality of PSG at the finish.

Djorkaeff et al would go all the way to the final the following May at the Heysel Stadium, where they would meet our old Cup Winners’ Cup adversaries, Rapid Vienna, the Austrians twisting the knife a bit further by wearing green-and-white Hoops in Brussels for their second such final in 11 seasons. PSG defender Bruno N’Gotty would score the only goal of the game on the half hour, as the French won their only European trophy to this day.

I hope you enjoyed that look at the sixth of our potential European opponents and our links with clubs and players from that country.