You are at:Home»Latest»Celtic’s remarkable European Adventure began 58 Years Ago tonight in Valencia
Showing 1 of 7
Next

The close-season of 1962 provided some much-needed hope and promise for the long-suffering supporters of Celtic. Despite a semi-final defeat by St Mirren in the Scottish Cup, where the legendary Willie Fernie had come back to haunt Celts, just five days after the Hoops had won 5-0 at Love Street in the League, and a disappointing League Cup campaign, where subsequently-relegated St Johnstone won both games against the Bhoys to emerge successful from their section, Celtic had just enjoyed their best League campaign in years.

The Hoops finished in third spot, eight points behind title-winners Dundee and five adrift of runners-up Rangers, despite scoring more goals and conceding fewer than the new Champions. Indeed, McGrory’s young side, with future Lions, McNeill, Clark, Chalmers and Hughes now established as first-team regulars and Crerand at his imperial peak before a transfer to Old Trafford, had actually beaten Dundee in March, as a young Lennox made his debut.

Nevertheless, the third-place League finish enabled participation in Europe for the first time, with a slot in the Inter-Cities Fairs Cup, where the rookie Celts were given the stiffest-possible test, drawn against holders Valencia, in the First Round. 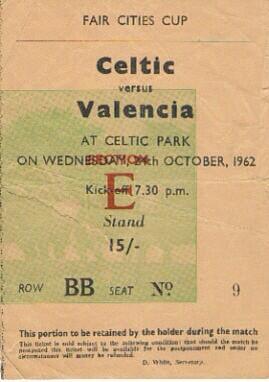 Also there, representing Scotland, were Jock Stein’s current and future teams, Dunfermline, who had finished fourth, three points behind Celtic, and Hibernian, who had come in a distant eighth. Presumably, in those days, competition entry was by invitation or application, otherwise, logically, 5th-placed Kilmarnock should have participated, rather than the Edinburgh side.

Dundee had qualified for the European Cup and Rangers, having won both domestic cups, for the Cup-Winners’ Cup. There was no European entry to be gained specifically by the winning of the League Cup at that time. Partick Thistle, a decade later, would be the first Scottish club to benefit from that rule change in a match where The Celtic Star Editor visited Hampden for the first time.

Valencia were an exceptional side, having won the tournament for the first time ‘the previous season’, beating Barcelona 7-3 on aggregate, thanks mainly to a six-goal performance in the Mestalla, where they were particularly formidable.

The two-legged final was actually played within five days in September 1962, just two weeks before Celtic visited Valencia for the first game of the following season’s competition!

Whilst this final was playing out, Celtic warmed-up for the task against Real Madrid at Celtic Park, losing 3-1 in a charity game for the Blue & White Challenge Cup, before taking a lap of honour in front of 72,000 fans, ecstatic at how well their young side had performed against the five-time European champions!