You are at:Home»Latest»Cesar and Celtic: Part 5 – A sensational Hoops introduction for John Hughes 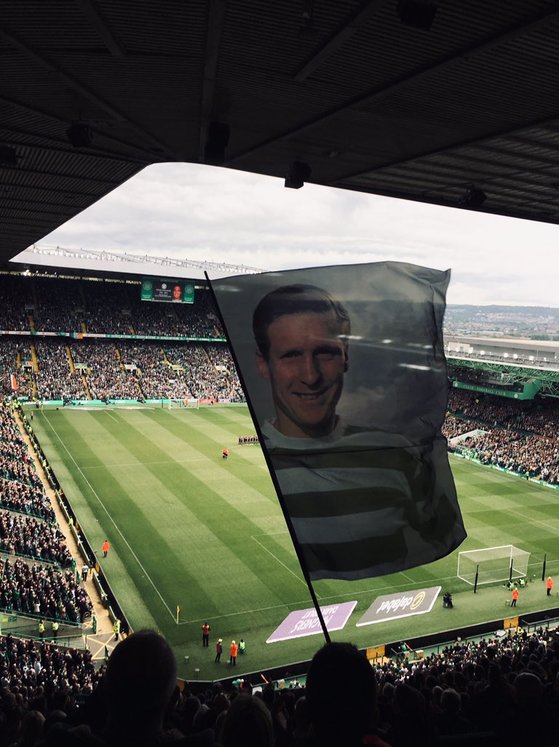 The fourth part of the series covered the latter stages of the transitional 1959/60 season, as Celts failed to win a trophy whilst drifting to a miserable ninth-place finish in the League, behind Motherwell, Clyde and Ayr United and a massive 21 points adrift of champions Hearts.

On the positive side, Dunky MacKay was already an international player and three new young Hoops stars had emerged in the free-scoring Stevie Chalmers, impressive wing-half Paddy Crerand and the imposing Billy McNeill, who had flirted between right-back, right-half and centre-half throughout the season.

McNeill would have an opportunity to establish himself in his best position, following the sale of Bobby Evans to Chelsea, whilst Charlie Tully had retired, leaving just Bertie Peacock and Neil Mochan remaining from Celtic’s last trophy-winning team, the 7-1 thrashing of Rangers just under three years earlier.

A number of other promising youngsters had made their senior debuts for the Bhoys in that season just ended, including future Lisbon Lions John Clark, John Fallon and Charlie Gallacher, whilst schoolboy stars John Hughes and Bobby Murdoch were attracting attention.

We pick up the story from there. 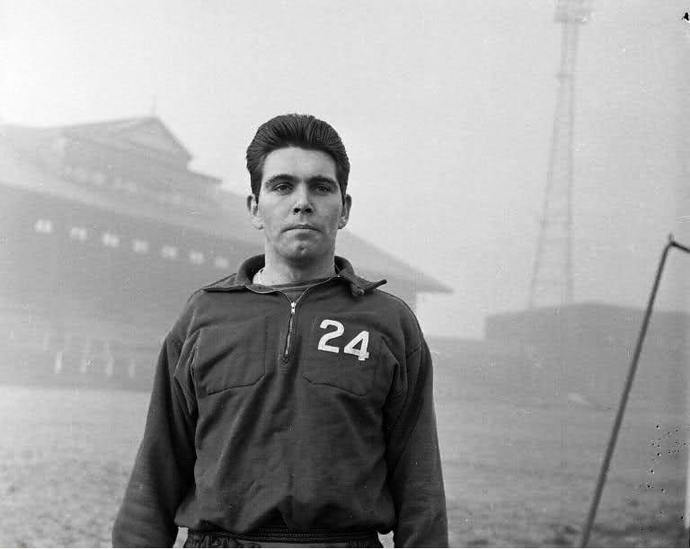 Seventeen-year-old Hughes was given his Celtic debut in the opening game of the 1960/61 season, the home League Cup-tie with Third Lanark on Saturday, 13 August 1960, perhaps a reward for his efforts in the annual pre-season ‘public trial’ match at Parkhead in midweek, where his ‘green-and-whites’ had beaten the ‘whites’ (wearing the classic shamrock kit) 4-0.

The Celtic team who took the field that afternoon in front of 25,000 fans was as follows:

Divers had been a last-minute replacement for the injured Bertie Auld, however it was the debutant Hughes who almost made a dream start, presented with an opportunity within 10 seconds, following a mistake from a Thirds defender. On this occasion, he would be foiled by visiting goalkeeper Robertson, however, early in the second half, he did open his Hoops account, heading powerfully home from Peacock’s cross. And with 15 minutes to play, Hughes turned provider, slipping in Neil Mochan for the veteran forward to clinch a 2-0 victory.

The new star Bhoy would make way for the returning Auld two nights later, as the Hoops blew Rangers away with a 4-2 victory in the Glasgow Cup-tie at the same venue. A Divers double plus the obligatory Chalmers strike and an own goal from Harold Davis saw Celts through to the semi-final, with Millar also grabbing a brace for the beaten Ibrox side, in front of 50,000 fans. Frank Haffey had saved an Eric Caldow penalty early in the second half, with Celts 2-1 ahead at that time. The Hoops would meet weekend opponents Third Lanark in the last four.

John Hughes came back in for Bertie Auld as Celts played a third game in just five days with a visit to Firhill on Wednesday, 17 August 1960. A late Bobby Carroll equaliser kept the Hoops at the top of their League cup section, following Rangers 2-1 defeat at Cathkin the same night. The youngster was again involved in a Celtic goal. Having swapped places with outside-left Neil Mochan as the game edged towards its conclusion, his cross was converted by Carroll to complete the scoring at 1-1. 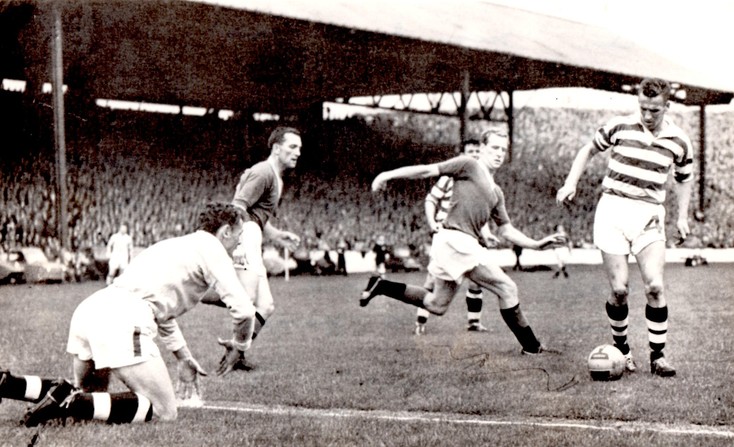 Three days later, John Hughes lined up for the biggest game of his fledgling career, in front of 60,000 spectators at Ibrox. And his dream start in the Hoops would continue, scoring Celtic’s third goal on the stroke of half-time, as the Bhoys made it two victories in five days against their city rivals.

He and Pat Crerand combined brilliantly as hopes increased that the balance of power in Glasgow would soon be heading east. Hughes set up Carroll and Divers as Celtic took a 2-0 lead within half-an-hour, then effectively settled the match with a strike from nowhere after Millar had again got on the scoresheet for the Govan club. A Ralph Brand goal on the hour made the result more respectable for the hosts, however it would be Celtic’s day. 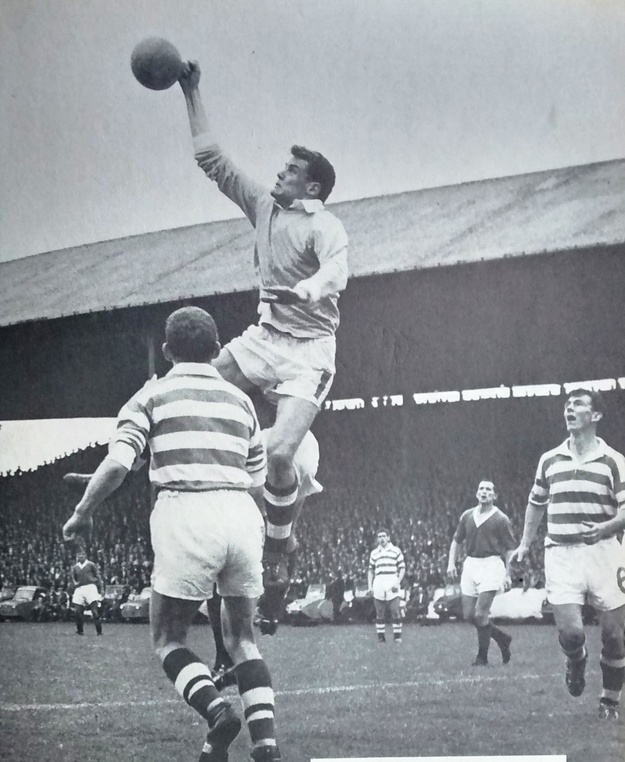 The 1960/61 League Championship got underway in midweek with a dangerous-looking trip to Rugby Park, to face a Kilmarnock side who had seen their hopes of a first-ever double dashed in the final weeks of the previous season.

John Fallon came in for the injured Haffey, the Hoopps keeper having played much of the weekend win at Ibrox with a broken bone in his hand. A late Neil Mochan goal would earn Celts a creditable 2-2 draw, the veteran striker getting the better of ex-Celtic defender Willie Toner, after two second-half Jackie McInally counters had cancelled out Bobby Carroll’s volleyed opener on the half-hour. Jackie’s son, Alan, played for Celtic in the mid 1980’s, before leaving for Aston Villa then Bayern Munich.

Saturday, 27 August 1960 saw the return League Cup match with Third Lanark at Cathkin, a 3-1 victory setting them up for the Glasgow Cup semi-final at the same venue two nights later. The latter clash would finish goalless, a Celtic side featuring John Kurila and John Clark in place of the injured Billy McNeill and Bertie Peacock. Up front, Steve Chalmers and John Hughes were rested, allowing Jim Conway and Charlie Gallacher a welcome taste of first-team action.

Victory over Partick Thistle at Celtic Park in the penultimate match on Wednesday, 31 August 1960, would guarantee the Hoops progression into the quarter-final. Alas, the Jags had other ideas, two first-half goals from Smith enough to take the two points to Maryhill, despite a brave fightback which culminated in John Hughes beating Freebairn to give Celts hope at 2-1.

With Rangers now just one point behind Celtic, League Cup qualification would come down to the clash between the sides at Parkhead on Saturday, 3 September 1960. 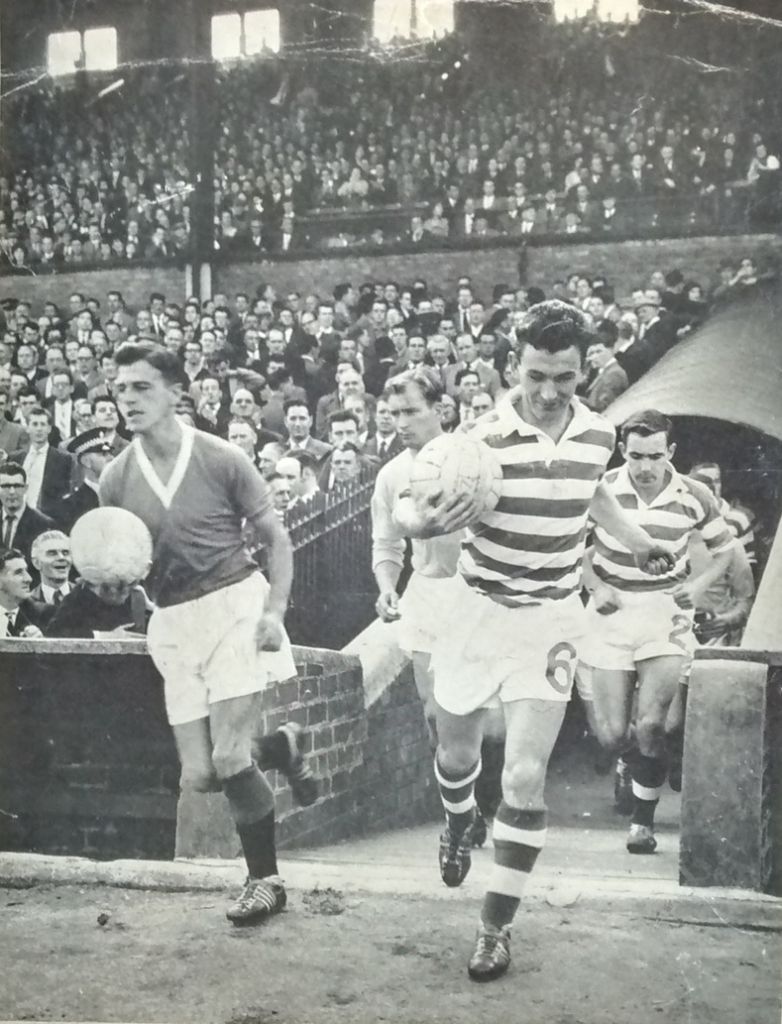 Celts only needed a draw before another 60,000 crowd, whilst the Ibrox side required a win. Steve Chalmers 2nd-minute goal was the perfect boost for home hopes, despite the continued absence of their first-choice goalkeeper and centre-half, Frank Haffey and Billy McNeill, Rangers vain attempts to claim offside dismissed by referee Tom ‘Tiny’ Wharton, prompting chants to ring around half of the ground, “Seven! Seven! Seven!”

That optimism was misplaced. Celtic’s forwards would contrive to miss a series of glaring opportunities, and they would pay for this in the worst possible fashion. Three minutes into the second period, Ibrox stopper Harold Davis managed to head into the correct goal this time, unlike the previous game, drawing Rangers level. And with 20 minutes remaining, Ralph Brand raced onto a Jimmy Millar pass to beat John Fallon and knock Celtic out of a League Cup which had earlier promised so much.

Been absolutely overwhelmed by the response since my book was made available to pre-order last Thursday, with support from family, friends and ‘friends I’ve yet to meet’ from all over the world. Wales, Scotland, Ireland, Germany, England, Belgium & Canada. Thank you so much! 💚🍀 https://t.co/3MACVGUz5C