You are at:Home»Latest»Cesar and Celtic: Part 7 – Consistently Inconsistent

The previous part of this series covered Billy’s first cup final as a Celtic player, which ended in a disappointing 2-0 defeat from Partick Thistle at Hampden in the Glasgow Cup final back in September 1960. 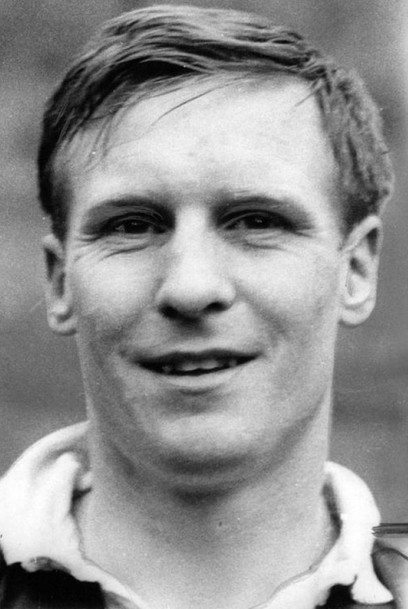 We pick up the story from there.

October began with one of the more bizarre episodes in Celtic’s history, covered in some detail by David Potter in The Celtic Star last week.

• Celtic’s third or fourth-choice goalkeeper – who is also a supporter – is waiting on public transport to take him to the first-team game. As a fan.

• The Celtic team bus passes him and stops to give him a lift to the game, as a courtesy.

• An hour or so later, he is told he is playing, against his former club, allegedly following interference from the club chairman.

• The team loses the game, he is blamed for both goals and he never plays for the Celtic first-team again.

Read David Potter’s account of the legendary debut of goalkeeper Willie Goldie at Broomfield Park, Airdrie on Saturday, 1 October 1960 in The Celtic Star. Stranger than fiction. 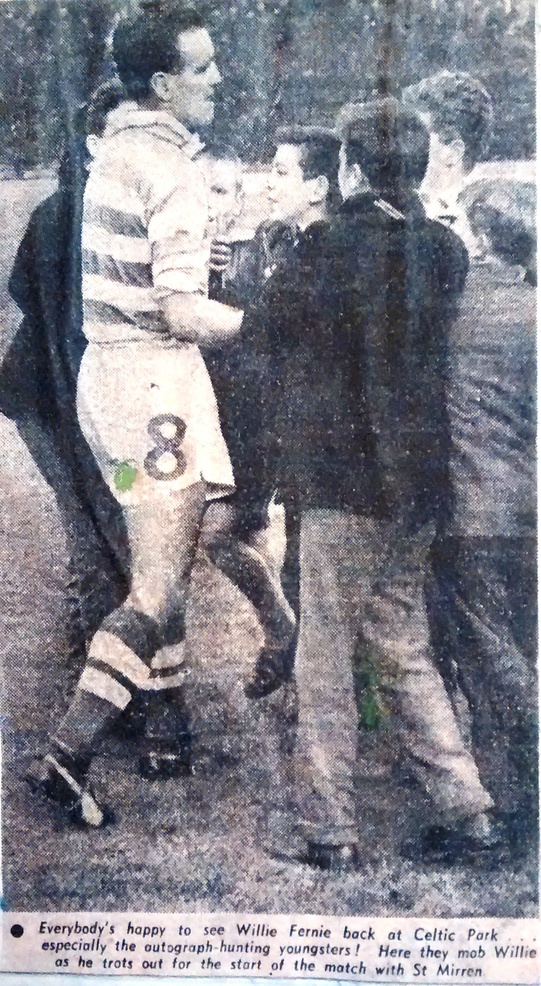 Following the 2-0 defeat at Broomfield, Celts finally won a League game at the sixth time of asking, a 4-2 home victory over St Mirren inspired by the returning Willie Fernie, signed earlier that week from Middlesbrough, and 2-goal Bertie Auld. 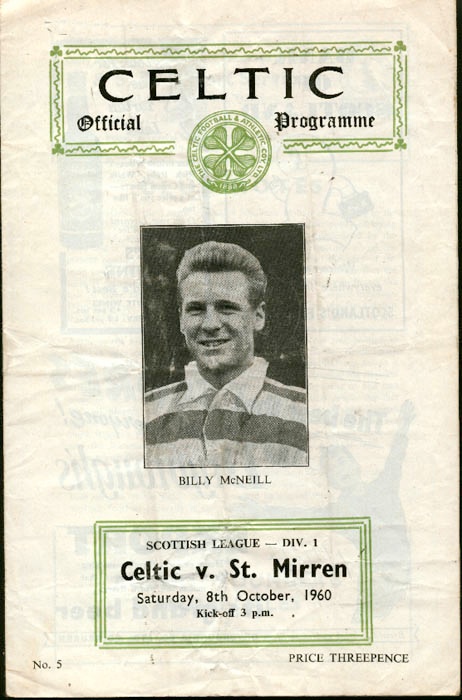 And both men were on the scoresheet again the following week, as Celtic ran riot at Easter Road, Bobby Carroll and Stevie Chalmers adding doubles in a 6-0 win. The invigorated Hoops then completed the month with victories over Clyde at Shawfield and against Ayr United at Celtic Park, scoring five times without reply.

November 1960 opened with a 2-2 draw at Starks Park, followed by a third successive defeat by Partick Thistle, this time by a single Hogan goal at Parkhead, as the good run came to a grinding halt. The following week saw both Neil Mochan and John Colrain leave Celtic Park, joining Dundee United and Clyde respectively.

The action on the pitch took place at East End Park, as Celts shared four goals in Fife for the second time in a fortnight, Jock Stein’s Dunfermline providing the latest opposition. The dismal winless run then continued into mid-December, a 2-1 defeat by St Johnstone at Muirton followed by a 1-1 home draw with Dundee United, featuring the returning Mochan, Celtic’s first Italian goalkeeper, Rolando Ugolini, and young centre-half Ron Yeats, who would form the backbone of Bill Shankly’s first great side at Liverpool.

Teenage centre-forward John Hughes was handed an opportunity again after a few weeks on the sidelines, repaying Jimmy McGrory’s faith by equalising early in the second half. Referee R H Davidson of Airdrie had earlier chalked off first-half goals from Hughes and Stevie Chalmers, whilst Mochan had enjoyed a fine game on his return to the club he adored. 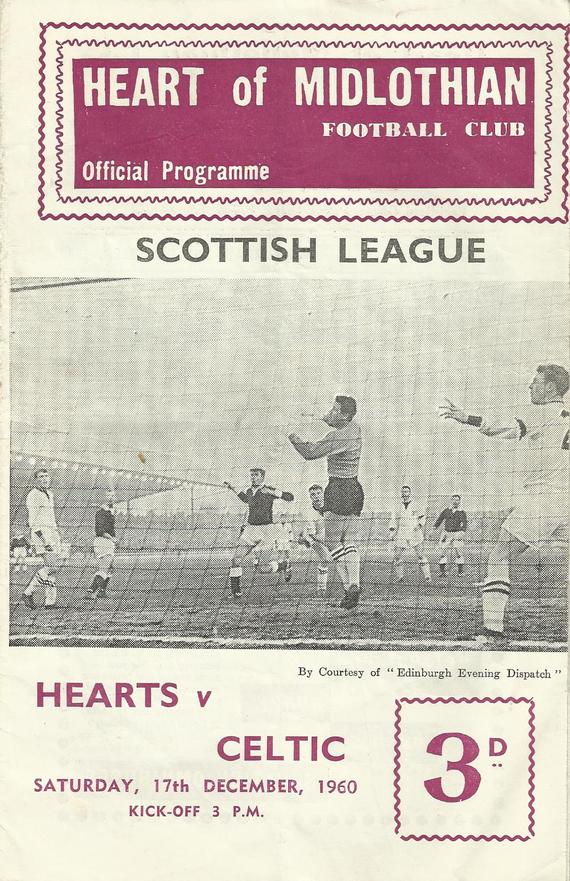 Saturday, 17 December 1960 saw Celts face a tricky trip to Tynecastle to face reigning League champions, Hearts. There was an interesting sideshow to the fixture, with the Bhoys having pursued the signature of the Edinburgh club’s inside-forward, Ian Crawford. Celtic had hoped to get him in exchange for John Colrain and, that having since fallen through, were still hoping to negotiate a price for his transfer. Crawford had scored twice against Celts in the Scottish Cup Final of April 1956, and he would repeat that feat on this day, either side of a glorious Paddy Crerand strike, as the Hoops slumped to a second consecutive defeat on the road.

The first year of the new decade was then concluded with three home wins in seven days, between Christmas Eve and Hogmanay. First up was Motherwell, the Parkhead injury situation forcing the introduction of wing-half Johnny Kelly as a makeshift centre-forward, the man I would meet many years later in the Celtic Club in Springburn making his debut that afternoon as John Divers’ early strike secured a much-needed two points for the hosts.

Johnny Kelly remained in the side for the Boxing Day clash with Dundee, this time at inside-left, as Jim Conway returned to lead the attack. Conway and Alec Byrne gave the Celts a 2-0 interval lead and despite a Hugh Robertson goal on the hour, following Frank Haffey’s save from future Scotland centre-forward Alan Gilzean, the Hoops held on to record another win. 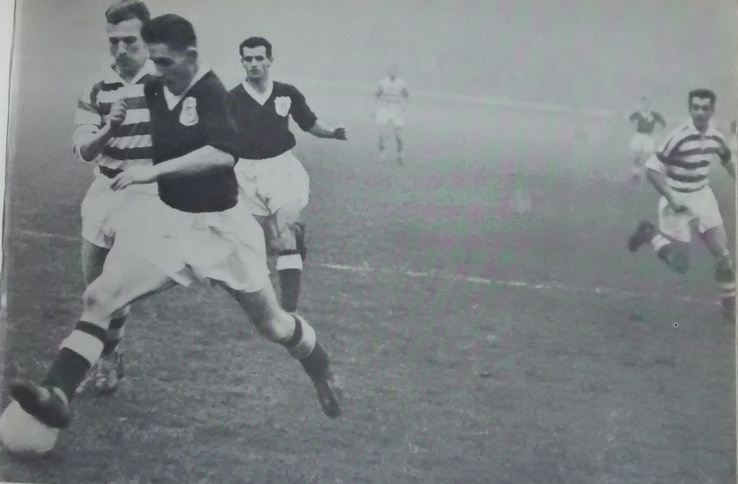 It was all-change again for the final match of 1960, against second-place Kilmarnock at Celtic Park. Young Charlie Gallagher came in to replace Kelly at inside-left, and it looked for an hour like it would be a disappointing afternoon for those of a Hoops persuasion, with the visitors two goals ahead and coasting. A Stevie Chalmers double turned all that around before the highlight of the game, Gallagher taking possession and dashing forward before beating Killie keeper McLaughlin with a tremendous finish, as Celts gained a hard-fought 3-2 victory.

As the curtain came down on 1960, that late run of wins had lifted the Bhoys up to eighth place in the table, albeit 11 points behind League leaders Rangers. Kilmarnock were now one point ahead of Aberdeen, whilst the next batch of five clubs were separated by a point, Third Lanark, Motherwell and Partick Thistle holding off the challenge of Airdrieonians and Celtic.