You are at:Home»Latest»Charlie Mulgrew suggests that Celtic flop could make impact next season

Vasilis Barkas was signed last season with the daunting task of replacing not one but two Celtic goalkeepers, Fraser Forster and Craig Gordon. Almost one season later, Barkas has failed to make any real impact since joining from AEK Athens in a deal worth £4.5m. Former Celtic defender Charlie Mulgrew has suggested that the player will be able to make an impact next season after a torrid start to life in Scotland.

As reported by the Daily Record, Mulgrew says that he expects the Greek Internationalist to fight for his place in the team and justify the fee that the club paid last season.

“I wasn’t too concerned when they went for Barkas last summer. They’d taken their time and I knew they’d have done their homework on him.

“But it’s impossible to tell who’s going to work out and who isn’t. You don’t know what’s going to happen. Barkas might come good next season but this certainly wasn’t his year.

“It has obviously been difficult moving to a different country but I’m sure that next season he’ll come back fighting for a place.” 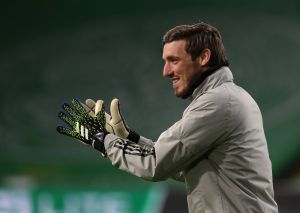 Barkas hasn’t played since the 2-2 draw versus Livingston in January with Scott Bain coming back into the team as No.1. Barkas has played 20 games this season and has endured scathing criticisms from supporters and pundits but he has been unfortunate in the fact he has been playing in front of defences that are hastily strung together.

With next season the only focus now, John Kennedy should make an attempt to re-integrate Barkas into the first team. The new manager may look to bring his own goalkeeper in but Barkas should be working with it in mind that he has an opportunity to impress and reinstate himself as No.1.