Former Celtic striker-turned-pundit Chris Sutton has perfectly summarised the situation that Celtic’s Ange Postecoglou has on his hands regarding Leigh Griffiths. The 30-year-old removed all mention of Celtic on his social media channels and trained in Scotland gear, despite saying he had chats with the Australian manager about a new deal.

Speaking to the Daily Record transfer podcast, the Celtic legend said that he reckons that Postecoglou cannot trust the striker based on his past troubles with fitness.

“The Griffiths debate is getting tiresome. Scotland at the Euros, Griffiths should’ve been picked? No he shouldn’t because he wasn’t at the required fitness level, hasn’t been all season. So let’s hope if Leigh is back in the gym that he’s up to speed and a massive asset. Because if he is, then Ange Postecoglou is going to be in a very good position.

“Leigh’s one of these players who Ange will be scrutinising and looking at closely. Everything about Leigh is going to be attitude, attitude, attitude. Fitness levels – is he going to be fit enough to play 90 minutes for three times a week? If he’s not then I’m afraid that’s unacceptable. He isn’t 40. He’s let his standards drop. 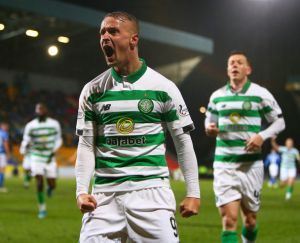 “You don’t lose that finishing ability. It’s all there but the fitness levels aren’t. He’s going to be a real dilemma for the manager coming in. I bet at the moment Postecoglou is thinking ‘I can’t trust him’. He’s another one who’s playing for his career. It’s not enough coming off the bench with little cameos. Little cameos won’t win Celtic back the title.”

The ex-Hibs striker has endured a poor season after a very public issue with his fitness at the beginning of the campaign. The player has undoubted quality but fitness concerns have been highly disruptive for the club not being able to call upon a player that can, on his day, turn a game on its head. It was this inconsistency that likely cost him a place in Steve Clarke’s 26-man team for the Euros.

Griffiths scored just five goals last season as Celtic struggled. The striker’s scoring record of 123 goals in 258 appearances represents an incredible return for the £800k paid to Wolves in 2014. However, no one should be beyond scrutiny and if Postecoglou decides that he is not the man to help regain the league, he should be let go. It looks as if Postecoglou has pulled the trigger on the player’s departure but you wouldn’t rule out Griffiths attempting to push the club into a decision.

Sutton hits the nail on the head, if the manager feels that he cannot call upon the player then he should reinvest the cash elsewhere.