You are at:Home»Latest»Christie Issues Warning to Celtic’s Rivals

RYAN CHRISTIE has issued a warning to Celtic’s rivals that the Scottish Champions wont be letting up anytime soon as they made it nine league wins in a row with a win at Tynecastle last night.

Christie grabbed the first with an excellent strike before Olivier Ntcham made it 2-0 against the struggling Hearts side. 2-0 flattered the Jambos and in reality it could have been more; however, Christie said, as reported by the Scottish Sun, that Celtic wont be letting up anytime soon as the games come thick and fast.

“We know the games before the winter break are huge. The manager has drilled it into us that we need to have that winning mentality.

“We were happy to get the win at a tough venue but now we have another tough game coming up against Aberdeen.”

Celtic face Derek McInnes’ Aberdeen on Saturday in what could prove to be another difficult tie as the Dons unpredictable form continues but the in-form Scottish midfielder has said that Celtic are focusing on themselves, which will make life tough for other teams if Neil Lennon’s team keep winning. 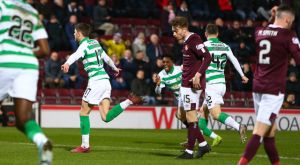 “We are very focused on ourselves right now. If we win the onus is on everyone else. That’s all we can do.

“The pressure is on everyone else. We’ve got three massive games from now to the break and we want three wins and nine points.

“That would put us in a good place for the rest of the season.

“Our league run is good, but we have that mentality where we’re not really thinking about that or how many wins we have.

“It’s all about focusing on the next game and having the determination to get the three points.”

Celtic have three fixtures remaining before the Winter Break offers a period of rest for the team, who have endured a gruelling schedule before Christmas. They host Aberdeen on Saturday, St Mirren on Boxing Day before the year ends with a Glasgow Derby at Celtic Park.