You are at:Home»Latest»Christie Reflects on Potential Move from Celtic with No Regrets

Ryan Christie has acknowledged how different his career could have been had the John McGinn saga played out with a move to Celtic. As the clubs remained locked in discussions, Christie was left wondering where he might end up if not at Celtic Park, with options coming from Jack Ross’ Sunderland, Derek McInnes’ Aberdeen and Neil Lennon’s Hibs.

The Celtic midfielder, speaking to the media conference today, was in a limbo but as the McGinn deal fell through and he moved to Aston Villa, the Moussa Dembele deal forced Brendan Rodgers to retain the midfielder in case he needed a forward option on the last day of the 2018 August transfer window.

The 23-year-old has been a revelation in the last year and has acknowledged that his career could have been so different had things panned out differently.

“It’s strange when I look back at last summer and think of how different it could have all gone.

“It went right down to deadline day when I was told to stay here and fight for my place. It’s strange how it all works out but I’m pretty delighted with how it panned out.

“It was pretty up and down. I came into training not knowing what would happen. The English window closed earlier than ours, so I was told if it was Sunderland I’d have to get off the training pitch and jump in a car.

“It was pretty mad that day. Brendan sat me down and I think Moussa was leaving. He just said I’d be needed here and that all other interest was off. 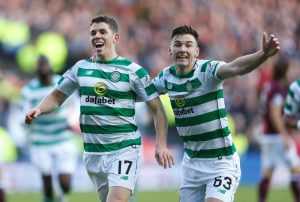 “I felt frustrated and at that point I was thinking it was maybe time for a fresh start somewhere else. But after the manager told me I still had a fighting chance to prove myself, that was all I needed to know because I was still desperate to show my worth to Celtic.

“As soon as the deadline day finished, it was no longer an option I just tried my hardest to break into the team. I never gave up hope on that. I played a game at Kilmarnock away and got beat 2-1. I was frustrated I hadn’t really taken my chance but the Murrayfield game came along and it will always be a game I’ll remember for the rest of my career.”`

It played out well for Christie but it could have been so different had different situations played out in different ways; however, Celtic are privileged to have a player of Christie’s calibre in their ranks.

It wasn’t until the League Cup Semi-Final win over Hearts that Christie announced himself on the scene. Two goals in the second half bolstered his claim to a start at Celtic and a few months later he had a new deal signed.

Christie has scored 17 goals in 35 appearances this season, becoming an early favourite for player of the year. However, he is keen to keep winning silverware after last weekend’s League Cup success and has his eyes on Sunday. Read Here.