Ryan Christie has tipped former Celtic defender, John Hughes for the vacancy at Easter Road. The pair worked together at Inverness Caledonian Thistle and secured a Scottish Cup together in 2015. As reported in the Scottish Sun, the 24-year-old has backed his former manager to make a comeback into management.

Christie, who joined from Caley Thistle, credits Hughes for getting the move to the Scottish Champions and reckons that he would be perfect for Easter Road.

“I have worked under John Hughes and I know about his strengths. For me, he is a perfect fit for Hibs.

“Hibs is massive football club and John knows all about them. He knows what they should be achieving and he knows the brand of football the supporters want. He can deliver it all.”

Hughes, 55, is one of a few names being thrown around in relation to the vacant position. Hughes was the manager at Easter Road between 2009 and 2010; however, despite leading the club to fourth place in his first full season in charge, he left after a poor start to his second season – whereby the fans turned on him. Not to dissimilar to the toxic behaviour they displayed towards Paul Heckingbottom when results began to waver. 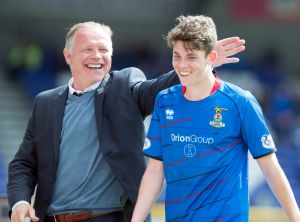 Christie, however, believes that Hughes has it in his locker to go into Hibs and change the mantra and get them playing attacking football to compliment the talented players they have there – like Mallan, Allan, Vela, Horgan, Boyle and Kamberi.

“When he took over at Inverness from Terry Butcher he wanted to change the way we played football. He wanted to go from route one to playing a passing game.

“He managed to change the style of football and the mindset of the players. He delivered success. That was done without making wholesale changes or banging on the chairman’s door to demand lots of money to bring in lots of players.

“It shows what a super coach John is. He is also good with the lads and keeps a happy atmosphere. He has a great balance of being able to coach and also have the players onside.”

Hughes has been out of the game since 2017 after an ill-fated spell at Raith will be itching to get back into coaching – especially given the fact he is from Leith and made over 70 appearances for Hibs as a player.

Hibs, despite their dismal start to the season remain a really attractive prospect to a lot of managers throughout the UK and Hughes, who has experience in the league as well as working to a budget – could be the ideal candidate to guide them back up the table.

Hughes made 42 appearances for Celtic between 1995-1996 and is fondly remembered for scoring at Ibrox in 1996.