You are at:Home»Latest»Club 1872 fail! They tried to overturn 11am cut off for Turnstile 67 entry on Sunday

AN ANGRY Rangers Fans Group has failed in attempt to overturn the 11am cut-off time for their 800 supporters to enter Paradise, via Turnstile 67, on Sunday.

The arrangements that have been put in place by Celtic in cooperation with Police Scotland means that the away supporters must be inside the stadium by 11am or they will be held away from the ground until after kick-off when they will be escorted to the away section by Police.

The Rangers fans with tickets have been told to meet at the Velodrome at 10.30am and thy will thereafter by loaded into the stadium. As soon as this news broke around ten days ago, the anger from the Rangers support was immediate. The fact that the change in circumstances is as a direct result of their own decision to reduce the Celtic support when visiting Ibrox, seems to have passed them by.

Tonight Club 1872, who are the second biggest shareholder in the club founded by Charles Green in 2012, released this statement: 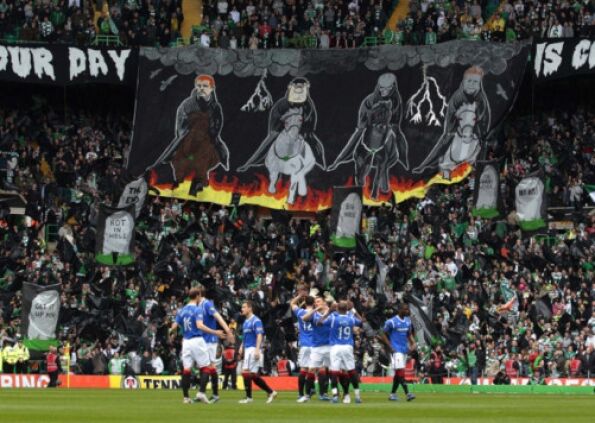 “Ahead of the upcoming Old Firm (sic) match on 31 March, Club 1872 representatives met with Police Scotland and Rangers to discuss security and safety arrangements for Rangers supporters attending the game.

“Club 1872 communicated concerns over the requirement for Rangers supporters to enter the stadium prior to 11am.

“We also questioned the security arrangements for supporters leaving the stadium, following issues with Rangers supporters being attacked after exiting the game at Celtic Park earlier this season.

“Regarding the early entry, it was made clear that this was a decision made on safety grounds and was something Celtic had insisted upon.

“Other options were put forward and discussed by Police Scotland, Rangers and Celtic but were ruled out on safety grounds.

“Whilst we appreciate the inconvenience this causes to our travelling supporters, safety does take precedence and there are no grounds to challenge the decision that are likely to be successful, following issues with overcrowding at Celtic Park earlier in the season.

“Police Scotland have assured us that they have taken account of the problems Rangers supporters faced exiting Celtic Park following the Old Firm (sic) game there earlier this season and that alternative arrangements which are now in place should improve this.

“We will be meeting with Police Scotland again following the game so if our supporters do face similar, or other issues, these will be raised at that time.”

The new arrangements are a better solution to the new circumstances with a much smaller away support. Police Scotland tried to manage the last game in September as if there had been no change in crowd numbers for both the away support (smaller) and indeed the home support (7000 more) and this led directly to the Janefield St Crush.

This should now be avoided with proper consideration now – better late than never – having been given to the new arrangements on the size of the away support.

The report into the crush was released today and you can read about that HERE.

Previous ArticleGreat News! Leigh Griffiths back at Celtic
Next Article Broony’s Revenge Mission then it’s Game Over for the Pathetic ‘Going for 55’