You are at:Home»Latest»Clubs plan Promotion and Relegation to Champions League

NEWS from Amsterdam where around 200 member clubs of the European Club Association have been meeting to discuss the future of European club competitions. Celtic were represented by ECA Board Member Peter Lawwell.  And it looks like they are moving ahead with an expansion programme that will see the introduction of promotion and relegation to the Champions League which could eventually have 32 teams in four groups of eight with some games played at the weekend.

This would dramatically increase the number of guaranteed games for the elite 32 clubs reaching the group stages.

Currently, the Europa League winner qualifies for the next season’s Champions League. The winner of a third-tier competition launching in 2021 will also be promoted to the next Europa League. 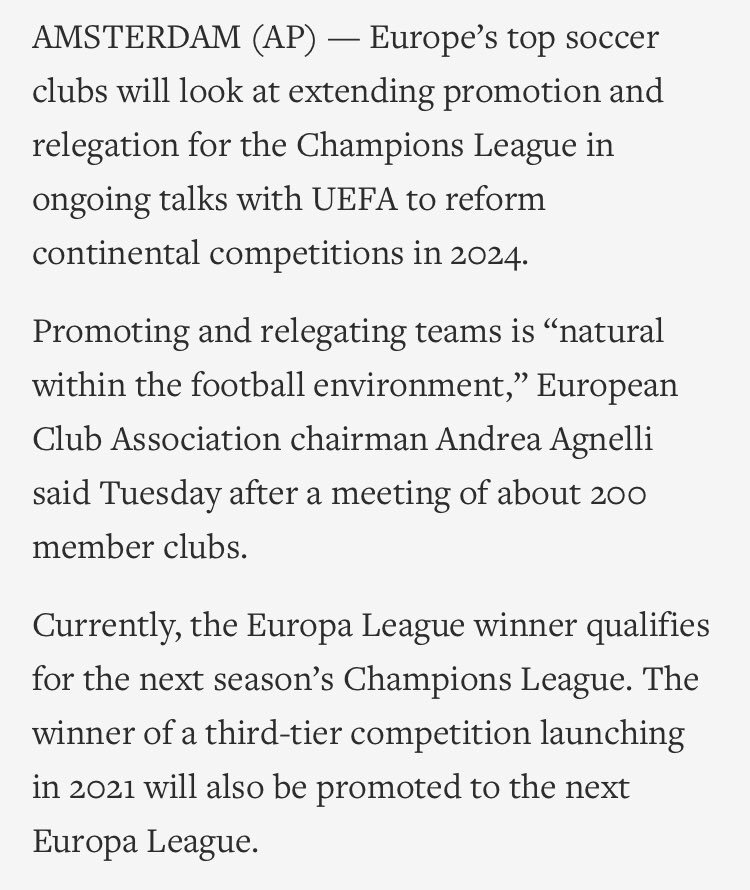 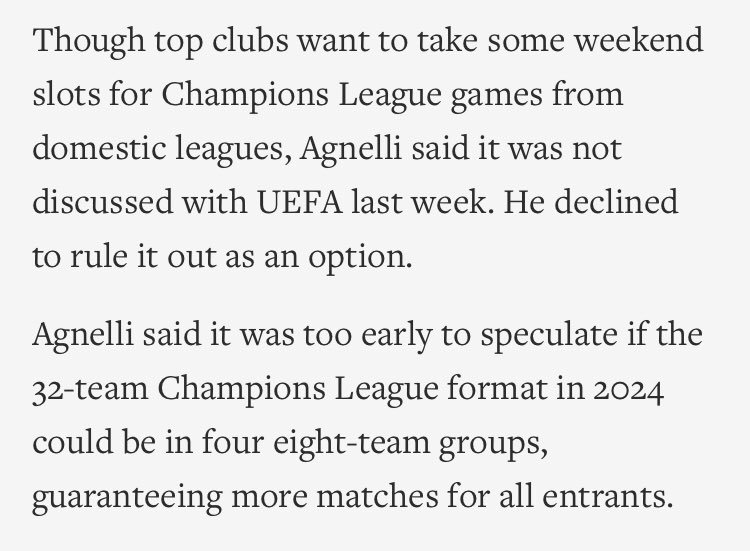 “It is certainly something that is logical to an open system. It might be logical internationally,” said the Juventus president, signaling talks on the issue in the coming months.

Agnelli said talks between UEFA and ECA leaders begun last week will take “12 to 18 months” to decide how UEFA’s club competitions look from 2024. UEFA will also consult with the European Leagues group and other stakeholders.

Europe’s most successful clubs (the rich ones, not the pretendy one) intend to have a big say in future plans being considered by both UEFA and FIFA. Agnelli restated why clubs are unwilling to play in FIFA’s revamped Club World Cup, which is intended to kick off in June-July 2021.

“We’re not willing to participate in this competition at this moment in time because of the congested calendar,” he said, pointing to the African Cup of Nations and rounds of World Cup qualifying games also scheduled around that time.

In a more personal attack on FIFA, Agnelli criticized its handling of the Club World Cup project as “like managing the local lottery for Thanksgiving.”

“We are used to managing a business,” said Agnelli, whose family created the Fiat car manufacturer. “It means we need to have full overview on a project that is presented to us.”

Seeking to persuade European clubs to play, FIFA official Zvonimir Boban — a former Croatia international — has made almost daily calls to the ECA “asking please, please and please and all the rest,” Agnelli said at a news conference.

Boban is a key figure in upcoming FIFA-led talks to decide the calendar of international games from 2024 when clubs must release their players — often reluctantly — for national team duty.

Agnelli has long set out 2024 as the pivotal date in soccer’s future to change the structure of when club and national team games are played.

Among other ideas put forth on Tuesday:

— Having fewer, but longer, call ups for national team duty, such as two release periods instead of three from September to November.

— Aligning continental events such as the European Championship and Copa America to play at the same time and help clubs’ planning.

— Top European leagues seeking to avoid competing against each other for broadcasters’ attention by coordinating weekend schedules.

— Limiting domestic games a club plays each season. Currently, a successful English team could play 52 competitive games, while the German maximum is 40.

Though top clubs want to take some weekend slots for Champions League games from domestic leagues, Agnelli said it was not discussed with UEFA last week. He declined to rule it out as an option.

Agnelli said it was too early to speculate if the 32-team Champions League format in 2024 could be in four eight-team groups, guaranteeing more matches for all entrants.

Juve chairman Agnelli confirms details of our story from nine days ago about some of the proposals on the table to remake the Champions League, per today’s @AP report from the ECA general assembly. https://t.co/ik2ejzCTq5 pic.twitter.com/1Si6r6aHR9